FlisKits will be announcing two new rocket kits at the upcoming NARCON 2010 at Clark University in Worcester, MA in the middle of March (next weekend).

The first of these off the assembly line is his L-13 rocket which was officially known as "The test rocket of March 26th, 1937"

Well, that was a little long for the header card, so we went with L-13
This is a sport scale model of his highest flying rocket which reached an altitude of 2700 meters.

30 of these kits will be given out at NARCON along with 30 of our other new release, the rocket known as Nell (Goddard's first rocket)

Kathy and I just finished kitting up the first batch of 100 of these wonderful kits (see attached pictures) and we expect to have the other one in the bag tomorrow afternoon as we work to get ready for the best NARCON ever!

When we first began looking into NARCON we (the NARCON committee) had a few choices for location. I was thrilled when Clark University was selected as it gave me the opportunity to get these two historic designs into production.

Keep watch over our website as we expect to have this available for purchase before the beginning of NARCON, later next week! 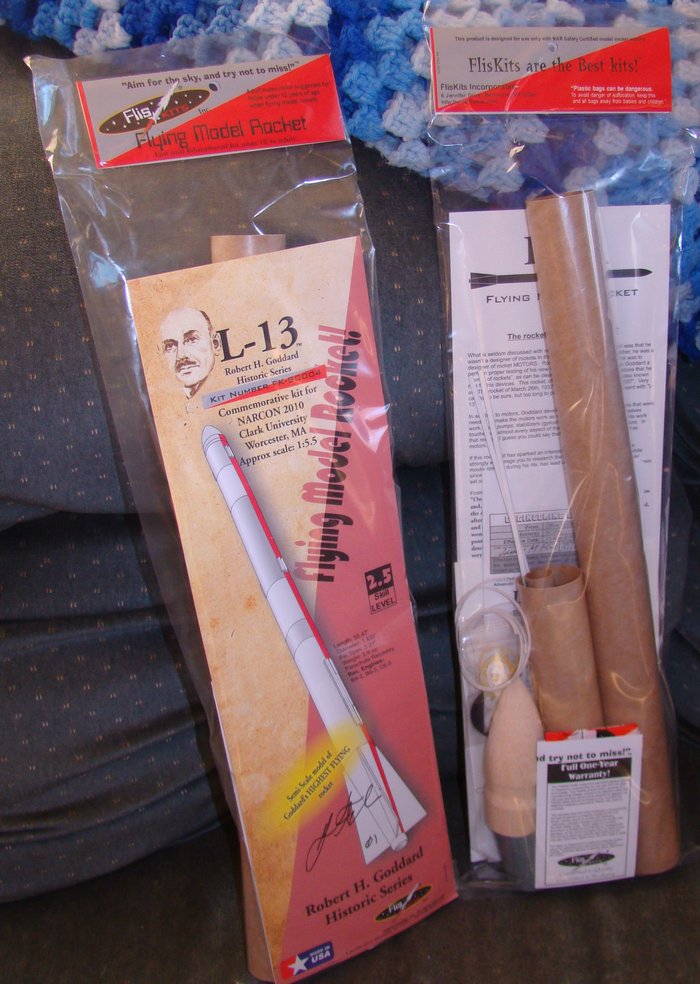 Both are scale kits and both are commemorative kits of the 2010 national convention (NARCON)!

These two kits make up the Robert H Goddard Historic Series and include:

Both kits are now released and available for purchase on our site. Shipments will begin mid-week next week, after we return form NARCON.

Weather permitting, a specialty built Nell kit will be flown on the VERY SAME spot that Goddard flew the original, Sunday afternoon, right after the conclusion of NARCON. This model, along with an L-13 model, will be donated to Clark University for inclusion in the Goddard Exhibit.

FlisKits is proud to be able to bring this caliber of rocketry to the community and we look forward to serving you well into the future!

Nell (Goddard) from Arkansas [by FlisKits]
2 3