Don't keep your rockets in your car

You'd think I'd learn. Every rocket I have in the car ends up getting broken. Happened today again! Had to slam on brakes (my fault) and sent my rangebox crashing down from the front seat onto four rockets below. All lost at least one fin. My beautiful Deuce, my new PONG and my Guardian, as well as a homebuild.

Lesson: When you're done flying, take the OUT of the car and put them in the house.

Away from the dog and children.

Oh, yeah - I learned a similar lesson about keeping rockets in a hot car. Used to keep them loose in a couple of large cardboard boxes. It worked fine until one especially hot day - the meeting ran long and when I went out to get the rockets to fly, the heat had softened the white glue I used to glue the fins on and the fillets. All the rockets actually laying on two fins flattened and deformed at least one of those fins. Now I store all my rockets in large storage plastic bins filled with styro peanuts. No more bent fins from the heat and I don't have to worry about anything falling on top of them and breaking something.

The pix on the right... that isn't the same rocket you had out at Frisco, is it? Looks a bit larger in diameter and shorter than what I remember.

I feel your pain re: the cat's chew toy - I had an Alpha that, for some reason, our tomcat figured was his and he proceeded to take it with him so he could bat it around at will.

The rocket I'm working on now actually uses the fins from that Little Bertha.

Hmmmmmmmm I wonder how many scratch built rockets started life as a Bertha?

Whenever I went to launches, I used to just stand up and stack my rockets on the back seat of my car. At least I kept the heavy stuff in the trunk! But every time I took a hard turn or had to hit the brakes, I would hear this unpleasant clatter from the back seat. Nothing ever actually got broken, but it wasn't good. And then this past summer I started packing them in bubble wrap in cardboard "rocket cases" that I have purchased online from various vendors. The "cases" usually aren't all that expensive, and the vendors even throw in rocket kits and parts for free when they ship them to me!

Finally stopped raining around here so I had a chance to examine the "car"nage. 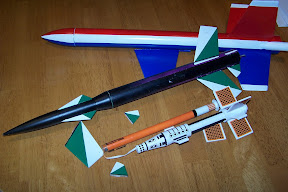 Ouch. At least it all looks repairable, and you didn't crush any tubes. I try not to leave my rockets in the car. If I do, I do my best to keep them well away (or above) anything that could cause damage.

We left an Estes RTF on top of all our camping stuff on an overnight stop in Glasgow. The local scum broke a window and took it, leaving my SLR and sundry valuables. They went for the shiniest thing, like magpies.

The PONG and the Deuce are back together again and will both fly this weekend. I haven't had the initiative to work on the Guardian yet. Lots of fins and i think my paint scheme is ugly anyway. I don't think the green works. Might take the opportunity to rework her.

I didn't mention this before, but these rockets were in the front seat because the trunk was doing Santa Claus duty. Normally I keep them more secure.

Spacecadet- I cant believe thieves would steal an Estes rocket over an SLR camera. Unless of course the thieves happen to be members of this forum. HMMMM... you might mention that to Scotland Yard.

Maybe they thought they were stealing the most wicked looking fireworks they ever saw?

I have heard of that technique - leaving a shiny, attractive but cheap object out as a "honey pot" to satisfy any potential thieves. Persistent searching carries with it an ever mounting risk of discovery and apprehension, and unless they already know that something else very valuable is in there, thieves cannot be certain that all of that extra time spent searching will net them anything that would be worth all of the risk. So they usually go for the easiest thing to reach so that they can quickly grab it and run off.

A number of years ago, there was a story (an urban legend, perhaps) going around about a person who had failed to get his trash to the curb in time for the last garbage pick-up before the holidays. Not wanting to spend Christmas with smelly garbage stinking up his back hall, the enterprising fellow boxed it all up, then wrapped the boxes with festive wrapping paper and bright shiny bows. He parked his convertible on a busy street near his apartment, with the top down and the packages on the back seat. A couple of hours later, he went back to check on his car, and sure enough, all of his garbage was gone. :grinch:

loopy said:
Ouch. At least it all looks repairable, and you didn't crush any tubes. I try not to leave my rockets in the car. If I do, I do my best to keep them well away (or above) anything that could cause damage.
Click to expand...

Actually, which is the best way to repair bite marks on balsa fins? transparent paint?

Well it was the second most valuable thing in the car, saving our by then slightly used sleeping bags. Although how much they got for it down the pub I don't know. Not many drugs I suspect.
We were sort of insulted that they didn't try to steal the car. Relieved, though.

The bit marks (as I type Elmo jumps up on the workbench) didn't effect the rocket's flight so no harm no foul and I just left them. I guess I could just cover them with more aluminum tape, but it does make for a good story.

UGH. I love my car but some things on it are a major PITA!

Surely I must be crazy...