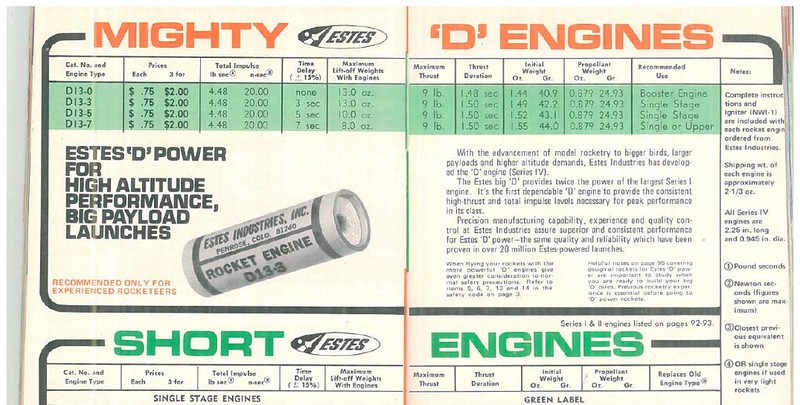 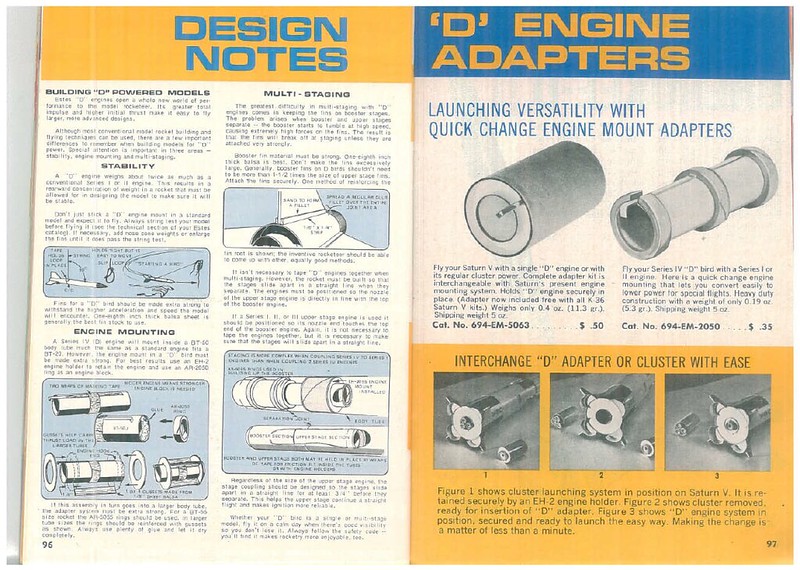 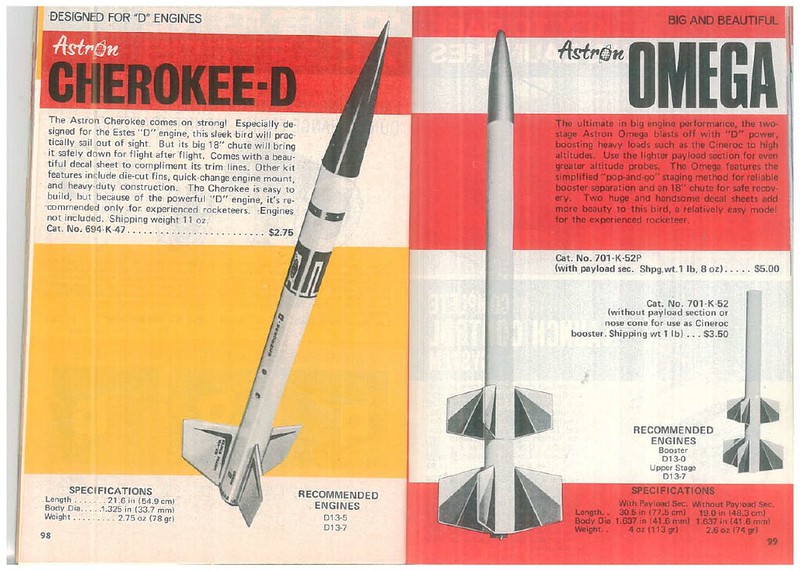 I only just learned of the D13 motors yesterday. In all my research on the OMEGA and its variants, I had overlooked the recommended motors, until it was pointed out to me by someone at Estes. They referred to it as the 'D13 "BOOM!" Engines', and informed me that it was subject to a recall.

That sounds pretty self explanatory. A close ancestor of the E9-BOOM, no doubt!

75Grandville said:
That sounds pretty self explanatory. A close ancestor of the E9-BOOM, no doubt!
Click to expand...

More like the E15s that usually went boom. E9s, so far seem about as reliable as D12s with the exception of a couple known bad batches.

That One D12-7 Cato Destroyed my original Goblin but didn't give me any pause to continue using the D13's as Long as I purchased them from the Factory or a Trusted Supplier during late Fall, Winter or the Early Spring. It has LONG be proven that D13's as well as D12's, Some E9's & E15's are more subject to Heat Cycling then most other BP motors. MIT also ran test in the mid 1970's proving the as long as these larger diameter motors were flown within 75 degrees F of the highest temperature they were exposed to they almost Never CATO'ed.

The Bad press they got in the early 70's was in large part due to motors purchased in late spring or summer flown in the late fall or winter. Which sort of matches up with my ill fated Egg-Lofter on that E15-4 at our June sanctioned Contest. OBTW the other E15-4 from the same pack was flown by my daughter who won with her A division Egg Loft flight.

Keep in mind, if your buying motors from an east coast supplier who has had shipments in the late spring or anytime during the summer, those motors spent from 5 to 7 days in a Trailer where the ambient air temp could be as high as 145 degrees f. 145 - 75 = 70 degrees f . Launching these motors below 70 degress would Greatly increase their likelyhood having a Cato.
Since adopting this purchasing strategy I have only had that one Local bought E15-4 Cato since 1995. Trust me when I tell you this purchasing stratery Still Works Today including all the Oop motors I still have from the 70's-80's & 1990's

Ps: D13-0/ D13-5 was my go to motor combo for my original Omaga/Cineroc. D13-7 on both flights I used it as the sustainer had Omage Sustainer coming down after Apogee while the D13-5 ejected at Apogee 23 of 29 flights. The Omage 2-stage was destroyed by vandels in the late 1970's but I still have the Cineroc seated on a Clone of the Omaga 2-stage flyable today.

Micromeister said:
... MIT also ran test in the mid 1970's proving the as long as these larger diameter motors were flown within 75 degrees F of the highest temperature they were exposed to they almost Never CATO'ed...
Click to expand...

I belonged to an active club at the time the D13s were introduced. We enthusiastically embraced "the Mighty D" and the kits that were marketed for them.

Although I have seen a number of E9 and E15 CATOs, none were nearly as exciting as some of the D13 failures I witnessed during their run. Flying D13s became a kind of "Russian Roulette" and they failed in myriad ways.

The most common failure was what I call a "blow through" - that is, the propellant would fragment and expel burning particles through the air frame. If you were going to have a failure, this is the kind you'd hope for. Often, you only had to replace your recovery system to fly again.

Some of these blow throughs took out nozzles as well. I did see a couple of times where only the nozzle failed, and the rocket lawn darted, because there was no longer any thrust.

One interesting way the D13s failed was that they would burn through the side of their casings. That happened to the maiden flight of my Goblin, circa 1971. Partway though boost, flames started erupting from the side of the model. It fell out of the sky. Post flight inspection revealed a 1/8" wide, 1" long channel burned into the side of the casing -- and of course, an identical channel in the body tube.

The more spectacular CATOs were the ones that blew out propellant, nozzle, and split the casing end to end. I must have witnessed 8 or 10 of those. One of those took out my Centuri Sprint (??) - the entire tail section was destroyed.

The biggest BOOM of all were the complete detonations. I saw 3 of those. The motor casings blew completely apart. I distinctly remember a Tall Tail Ten shattering and raining parts down on us.

Oh, in case you were wondering, we did not mail order our motors, we purchased them at the local hobby shop.

LW Bercini said:
Oh, in case you were wondering, we did not mail order our motors, we purchased them at the local hobby shop.
Click to expand...

Where as, I had returned all of the recalled D13's I had....I thought. There was one straggler in my range box that I used in my 1st Saturn V displaying the noted BOOM, and the whole aft end of my Saturn V was blown apart. Wish I had remembered it at the time. I could have used one of the D12's I had.

Gary Byrum said:
There was one straggler in my range box that I used in my 1st Saturn V displaying the noted BOOM, and the whole aft end of my Saturn V was blown apart.
Click to expand...

Oh! I remember seeing a D-kaboom in a Saturn V back in the day. Was it yours??!!?

John's take is spot on. The D13/D12 were introduced before the hazards of high-temp thermal cycling became widely known in the mid-later 1970s. If your D13's had never been hot they would work just fine, which is how they got through factory testing, NAR certification and into production. The change from the D13 to D12 was fairly minor, reducing the chamber pressure a small amount. What is sometimes lost in the legend is the fact that the D12's kept on blowing out until the word about thermal cycling got out and shipment and storage conditions were adjusted. I remember a whole row of nice Saturn V's getting destroyed at NARAM-17 in 1975, mostly on D12s.

I flew a half dozen in the early 70's without issue. Built an upscale Cobra with two strap-ons. The game plan was to have a shorter delay (5sec) on the strapons so those two chutes would slow the descent a bit and then a long delay central motor (7sec) would
blow the 36" chute to slow the descent further. Sort of an early dual deploy profile. Weeeeeell, the 3 cluster was straight across and I used two parallel paperclips for support for the Estes "blue pyrogen" igniters. They were good igniters back then.
I launched the rocket and it roared on ascent. Unfortunately (I didn't know it at the time) the central D13-7 didn't ignite though the boost was arrow straight because the two outboards fired at the same time so there was no asymmetric thrust.

The two outboard nosecones blew around apogee and I used the stupid rubber band shockcords. The rubber was old and they both broke! The nosecones/chutes probably ended up in Batavia, Illinois (a long ways away from Wheaton)
Without the lit D13-7 to blow the central chute, the rocket did a death dive to terra firma. With the open ends of the strapons now sans nosecones it whistled like crazy to its death. I wasn't saddened as it was pretty cool to see. I was
16 at the time and I think it was the last rocket I launched until I became a BAR in my late 40's

Hmmmmmm, Come to think of it, I ought to build a clone with modern techniques (and shockcords!!) and see if I can pull off a nominal flight! Sheesh, I have the parts sitting around already too.