Well, I've finally come to realize that my overly ambitious self tried once again to outwit my practical self in regards to the 1/13 scale Mercury Redstone L2 project I've been laying awake at night planning.

What I have thus far, is the entire nose section, and nothing more. 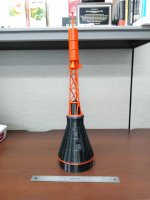 This is 3D printed from the Thingiverse file, located at: https://www.thingiverse.com/thing:3285664.

Here's an "expanded" view of what I've printed. 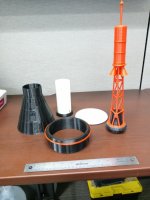 In the photo above, the capsule nose and LES are glued together (and the white superglue fogging seen at the juncture of the capsule nose and base of the tower has been colored in with magic markers so as to not be as glaringly visible), but nothing else is glued (the red trim ring has not been glued to the shoulder, and the AVBay tube (white tube), tube support ring (black ring at base of tube) and "capsule floor" (white PETG printed disk looking part to the left of the LES).

When assembled for flight, the parts stack together and are held together with a length of threaded rod that goes from the base of the capsule nose, through the AVBay, through a hole in the bottom of the capsule floor and secured with a nut, thus holding it all together for flight.

Member "Spacemo" here on TRF posted in my thread "The Adventure Begins" a couple pics of his Mercury Redstone and his nose-weight solution. I did sim this up in Open Rocket and OR says it'll need about 2.5 lbs of weight in the nose to get 1-cal of stability...that's with a Loki L1400 (of note, OR says , 5,294 ft and Mach .90...I don't think the LES could withstand that flight though). Other motor combos show 1-cal of stability and more realistic altitudes and speeds.) Also of note, Spacemo stated that if flown with the LES tower, the tower will break on landing so should be considered expendable. It's easy to print the tower and pieces so should you or anyone decide to take this project on, be prepared to have a "display" tower assembly and one for flight that you won't be to tore up about chucking in the trash at the end of the day at the launch field.

My Open Rocket file is also attached. It "looks" like a Mercury Redstone, though some of the capsule parts measurements might be off a bit, their weights are over-ridden and weights calculated from the 3D printer slicer "Cura" for the individual parts are subbed in. The .ORK file shows my putting a 2.5lb weight in the AVBay for balance, but Spacemo's way of adding washers to the base of the capsule floor would probably be a better and more secure idea. The fins are sized from NASA measurements and are close, as OR won't let you get more than a couple decimal points deep, so they are rounded up to (I think) two decimal points and then adjusted here and there for straightness and squareness. Perfect? No. Close? Yes.

The OR file shows a long motor mount. I did that to reduce the volume of the airframe for motor ejection. The airframe in my .ORK has a (poorly) rendered baffle/coupler to join the lower and upper airframe tubes (making this a nose popper) and a 5.54" with a 3.9" hole centering ring above the baffle to be used as a "laundry shelf" to keep the packed parachute above and away from the baffle. It seemed like a practical solution to keep the 'chute further up towards the nose for balance purposes.

So, with that all out of the way, you are probably thinking "Just how much money does Jon want for this stuff?" Well I'm thinking since it ain't perfect (but it passes the 10' rule) and it was a learning experience, then I don't really want to charge a lot for it. I have (including mistakes) a roll of black PLA, about 1/2 roll of red PLA, about a half roll of white PLA and a few meters of white PETG...I'd be willing to let it go for $100 shipped.

So, there it is. $100 gets you what is in the photos above. If it doesn't sell, it'll go on display at my office where I can regale my co-workers of my lofty plan to one day build this 1/13 stand-off scale, 11lb tribute to Lawrence County Indiana's own native son and the second US Astronaut into space at the beginning of the then fledgling US space program.

Well, it's gone. Not to a buyer, but to the landfill. I was being a pissy little brat and threw it out of the closet it was in and broke it. Then in my pissy little rage, I threw it (not gently) into the trashcan, then not long afterwards took the trash to the dumpster.

Then I apologized to my wife for being a pissy little brat.

So, I guess we can close this thread.

Rage doesnt respect rockets, that why i keep mine in the corner of a room i rarely go in lol

its ok, the redstone kit has funny looking fins anyways.

Oh well,
Me thinks the tower base should have been press fit to the nosecone to be removable for flight. I've been told the towers of these things are prone to break unless a harness was rigged so the capsule came down "nose up" under chute.
There would be more force on the tower if the capsule had to carry any balance nose weight. Looks like it was a beautiful effort though and sorry about the loss. I bet someone would have got it flying on a scale Redstone or the more difficult Atlas.
Kurt Savegnago
M

I need to find a 1/12 scale version for my live steam trains... Would make a cool flatcar load

mrwalsh85 said:
I need to find a 1/12 scale version for my live steam trains... Would make a cool flatcar load
Click to expand...