I am putting this under the Watering Hole since it isn't exactly the type of rockets this place typically sees.

My older son had the chance to build a water rocket for extra credit in science this year. They were graded on several factors. 10 pts for lift-off, 10 pts per 100' of altitude (using and Estes tool), 30 pts for a successful parachute deploy and 30 pts for safely retrieving an egg.

No real restrictions on the set up of the rockets other than they had to be plastic pop bottles. Fins could be make of anything and configuration was up to the student. Thanks to the rockets we have built and the information on the Rocketry Forum he knew far more about CG and CF than the other kids. So rather than going for the minimum fin and minimum nose cone weight, he went for flared fins and a very heavy nose cone.

My son went with a 2-liter bottle from Coke. His fins where made of card stock and the nose cone was made from a sports cone tapped over (it was not a solid cone but had an open spiral form). A rock that weighed the same as an egg was used for testing of the nose cone recovery system.

The first decision he made was that he would only do a recovery on the nose cone, the booster would be free to fall to earth on its own. In test drops from the roof he found that a single chute of any size wasn't cutting it. He tried dual 12" chutes and still wasn't working. He finally cut his own 24" chutes from a garbage bag and everything worked nicely. My help was to tie 16 bowlines in all those shrouds connecting the chutes.

Next was how to get the twin chutes to actually deploy. Lots of kids had tried a parachute and few if any got them to deploy. They had mostly tried just stuffing them into their nose cones, so that method was out. My son decided to go with chute bags like he had seen on the bigger rockets. Two zip lock snack bags worked out perfectly for this. I told him to try for double points on the chutes if they worked. The teacher initially laughed and said no. Then my son showed him the configuration and he gave him the double points. He said he thought he had just shoved two parachutes into the nose, but was impressed on the thought that went into the design.

The next issue was where to put the chutes. The nose cone, while large, did not have enough room for an egg, padding, two chute bags and the shrouds. So he added a chute compartment to the booster that was the straight section of another 2-liter bottle (dad drinks a lot of Coke). This was the perfect size for the two chutes with enough room for all of the rigging. He then created a harness for the nose cone with a four point attachment and a loop to attach the chute shrouds. The chutes have swivels like our model rockets since that seems to keep the shrouds the straightest.

Next he put some small tabs around the top of the chute compartment to hold the nose cone off the booster. Since there is no charge to force the nose cone away it needs to be loose enough to fall away on its own. It takes some time as the separation occurs mostly to the weight of the nose cone pulling it down faster than the booster with the drag inducing fins.

Yesterday I had a chance to head over to the school and take some pictures of its flight. These shots are of the final "egg flight" that he did.

Pictures are at 1/3 second intervals. 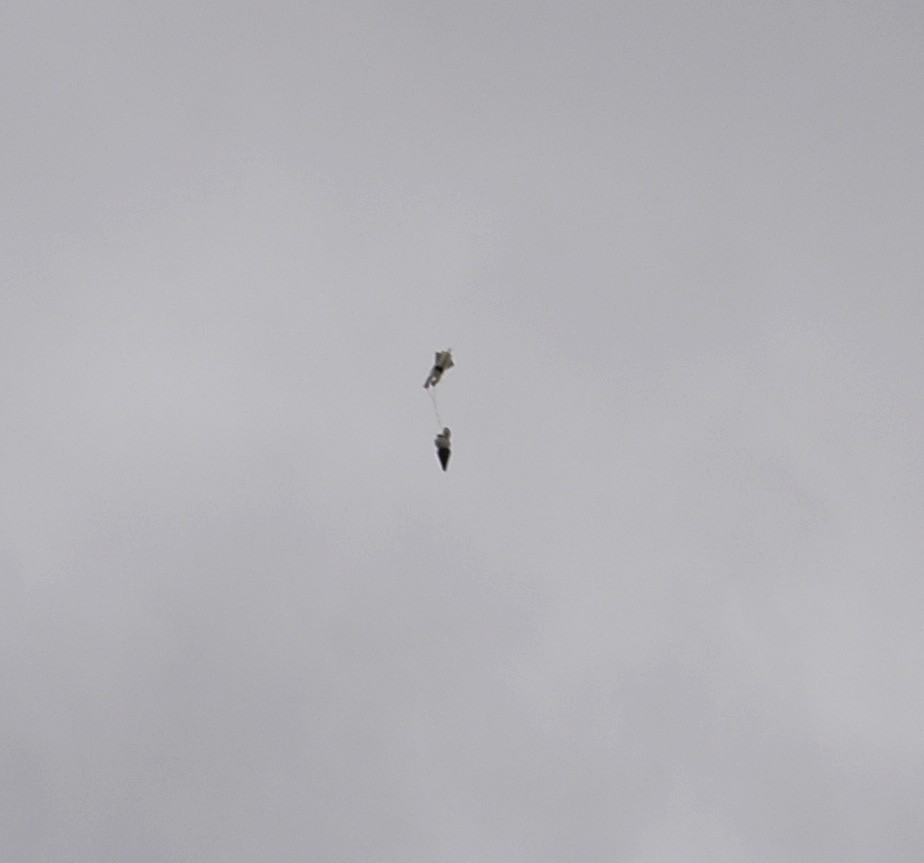 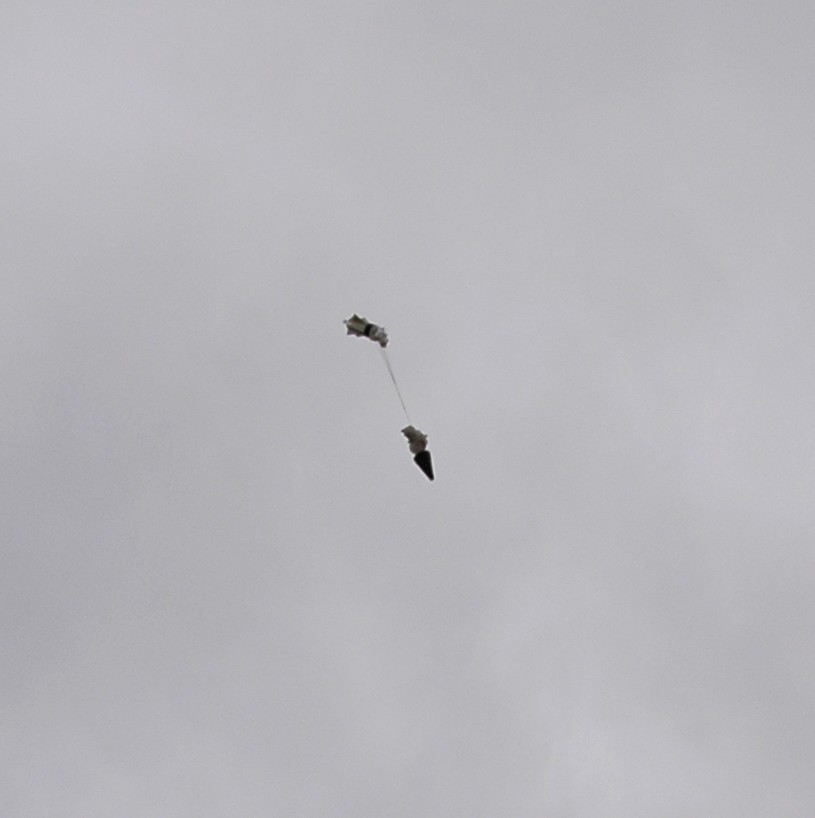 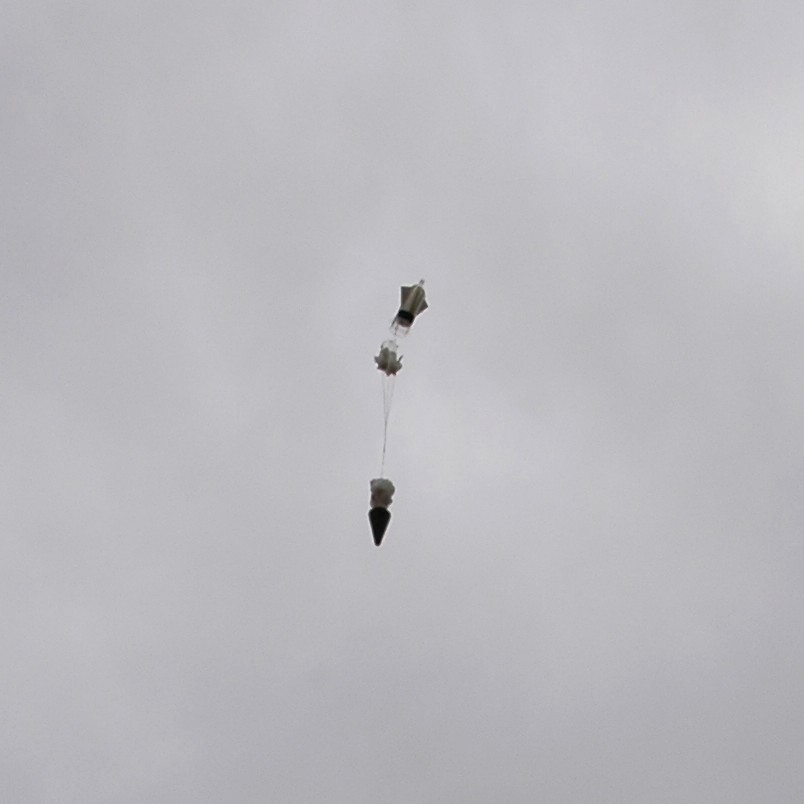 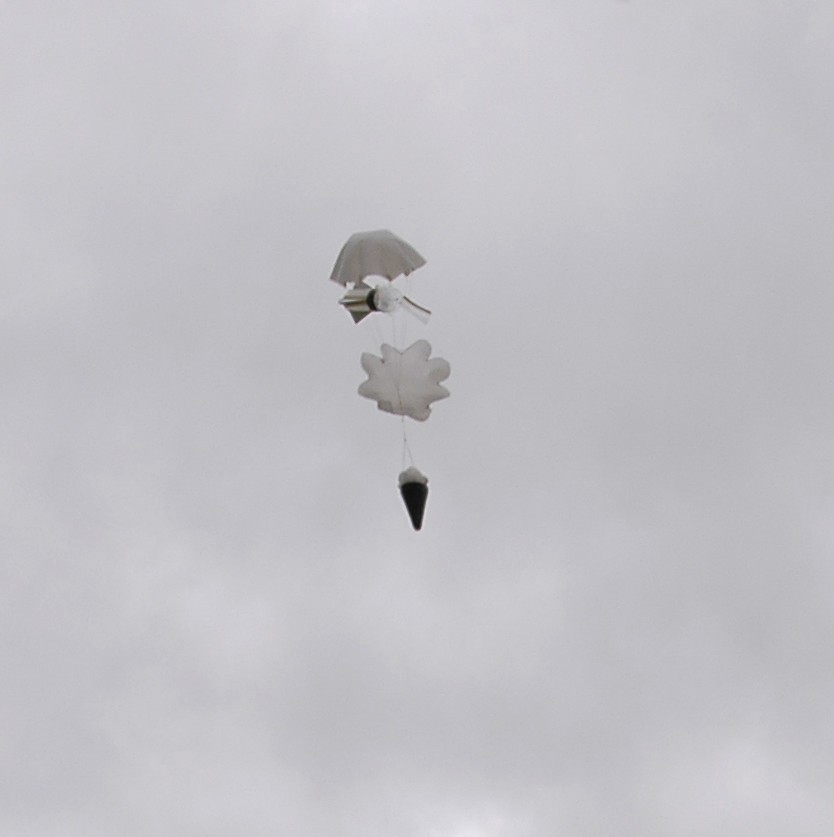 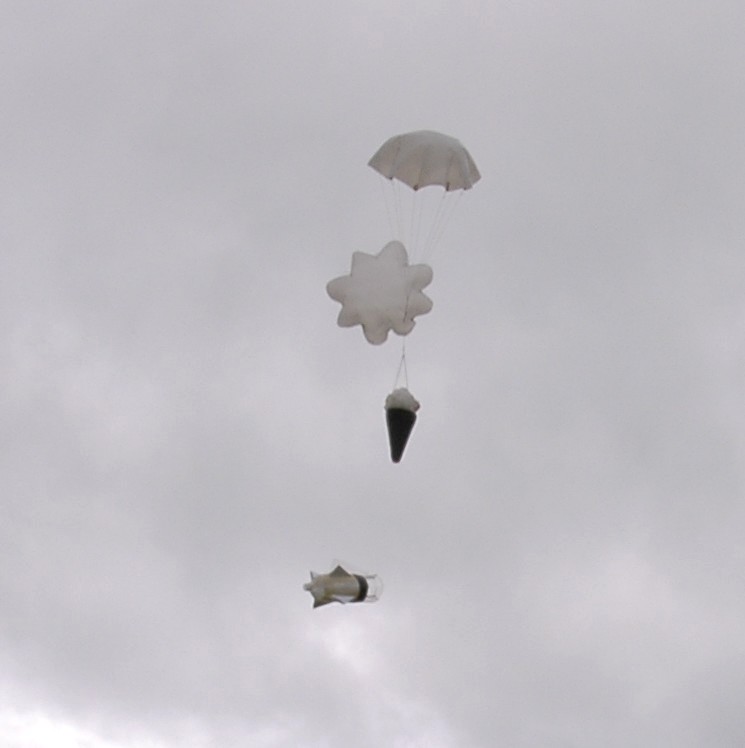 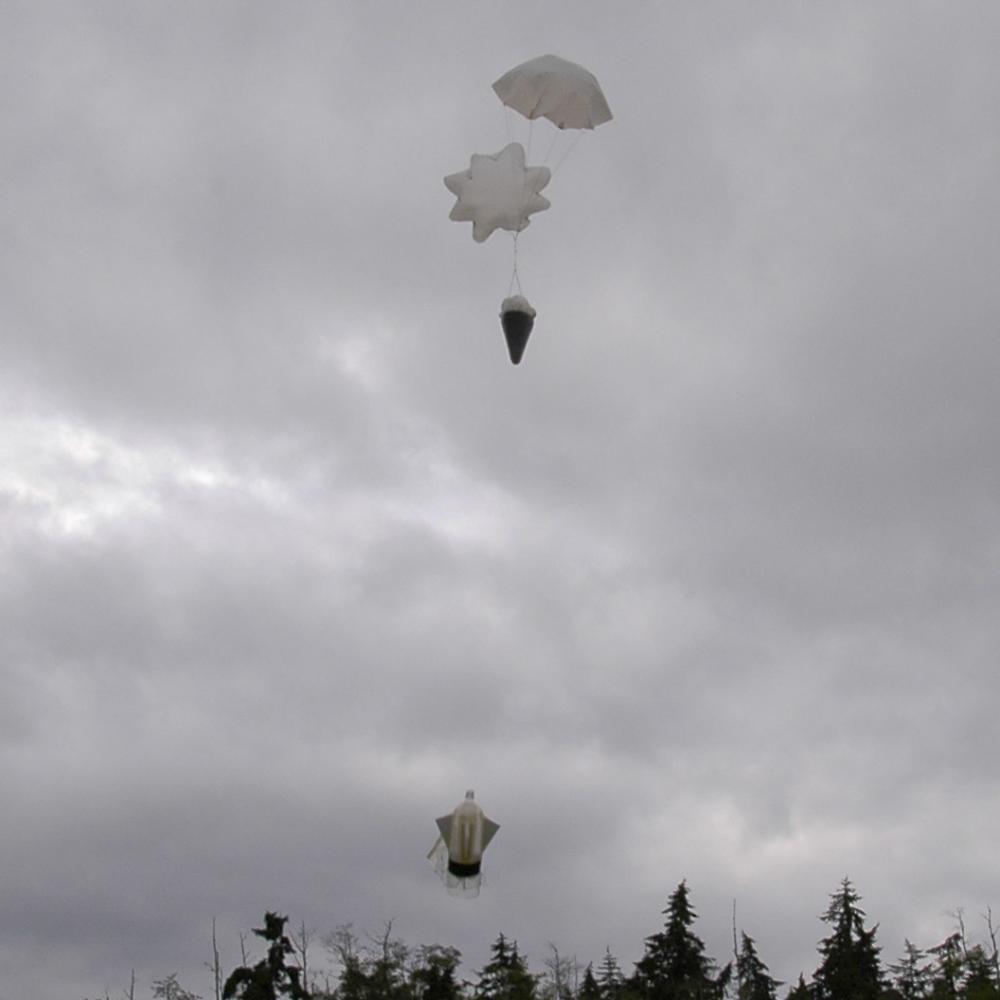 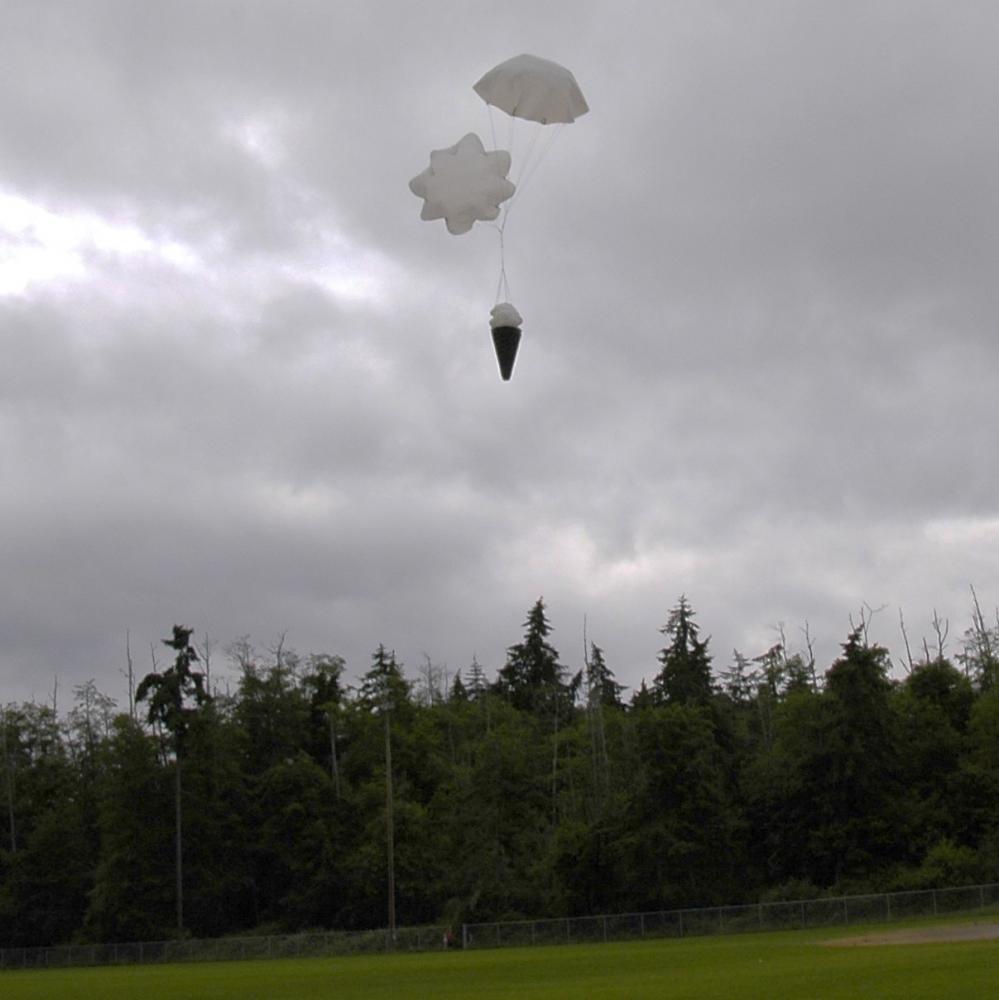 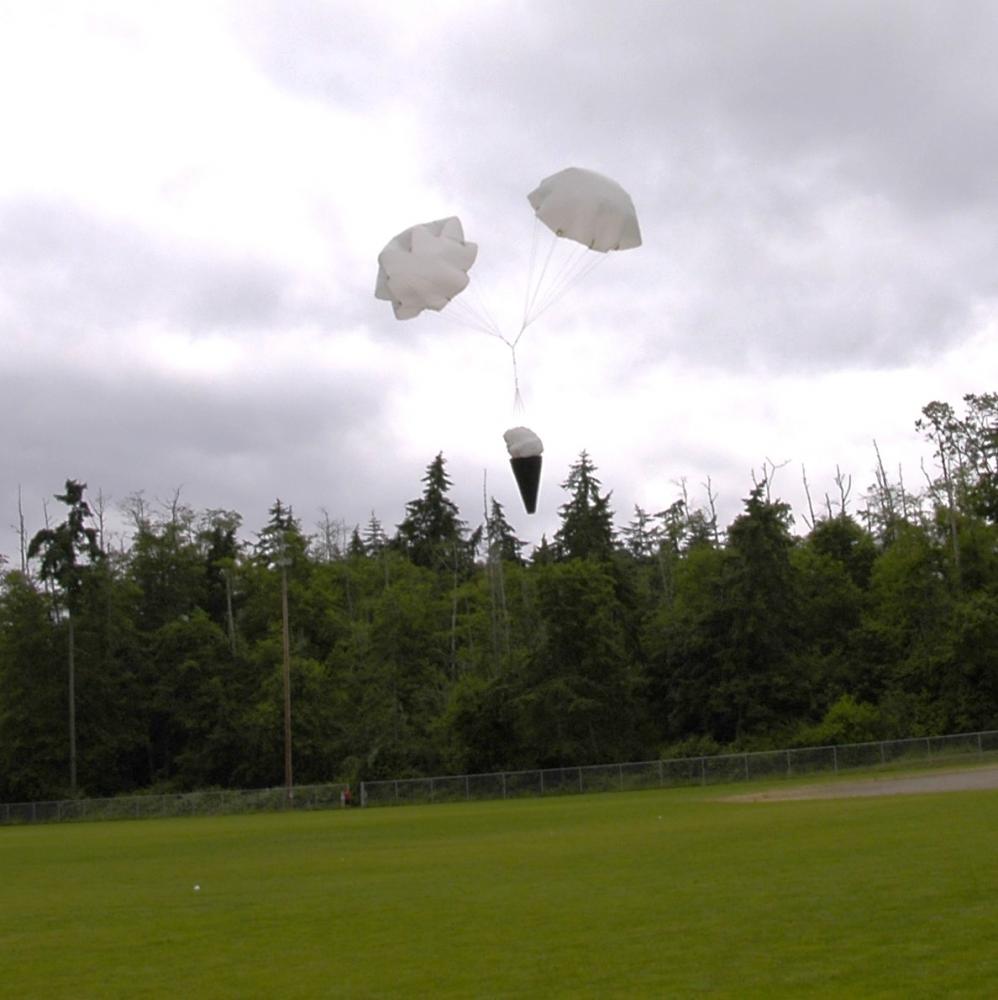 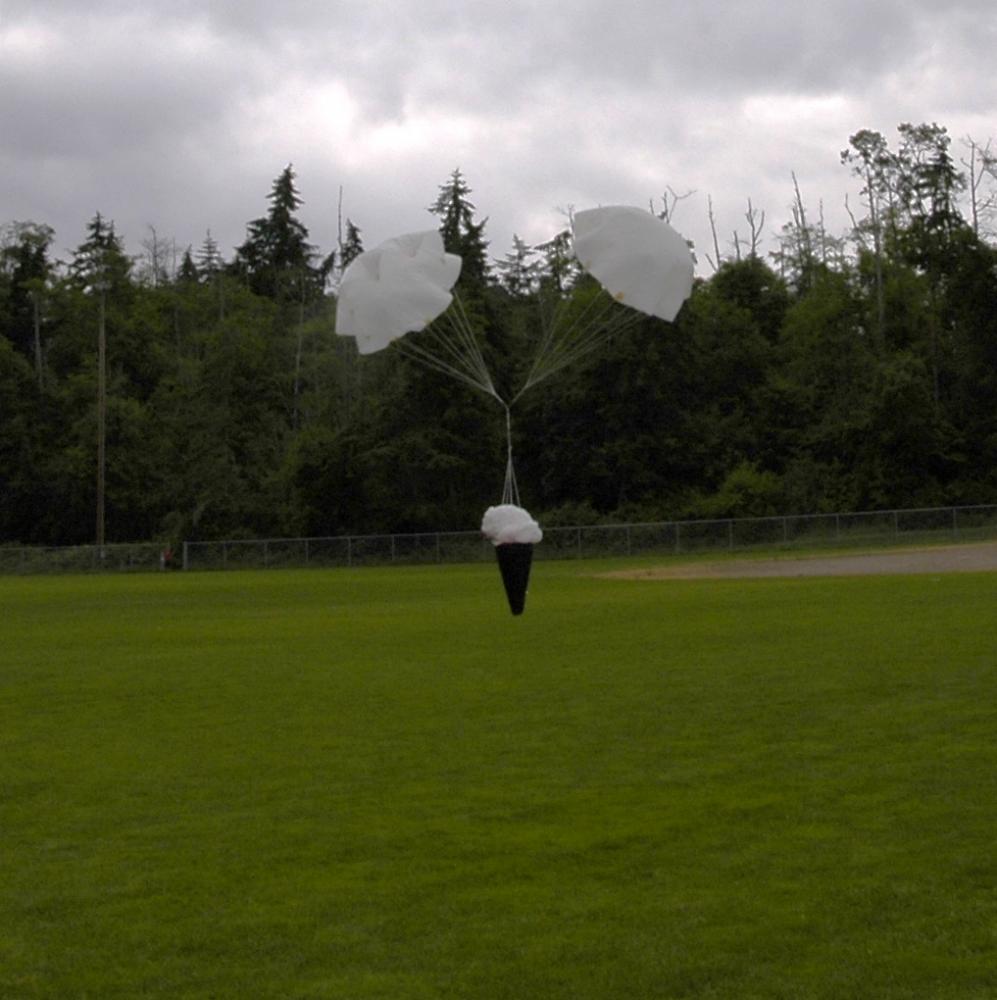 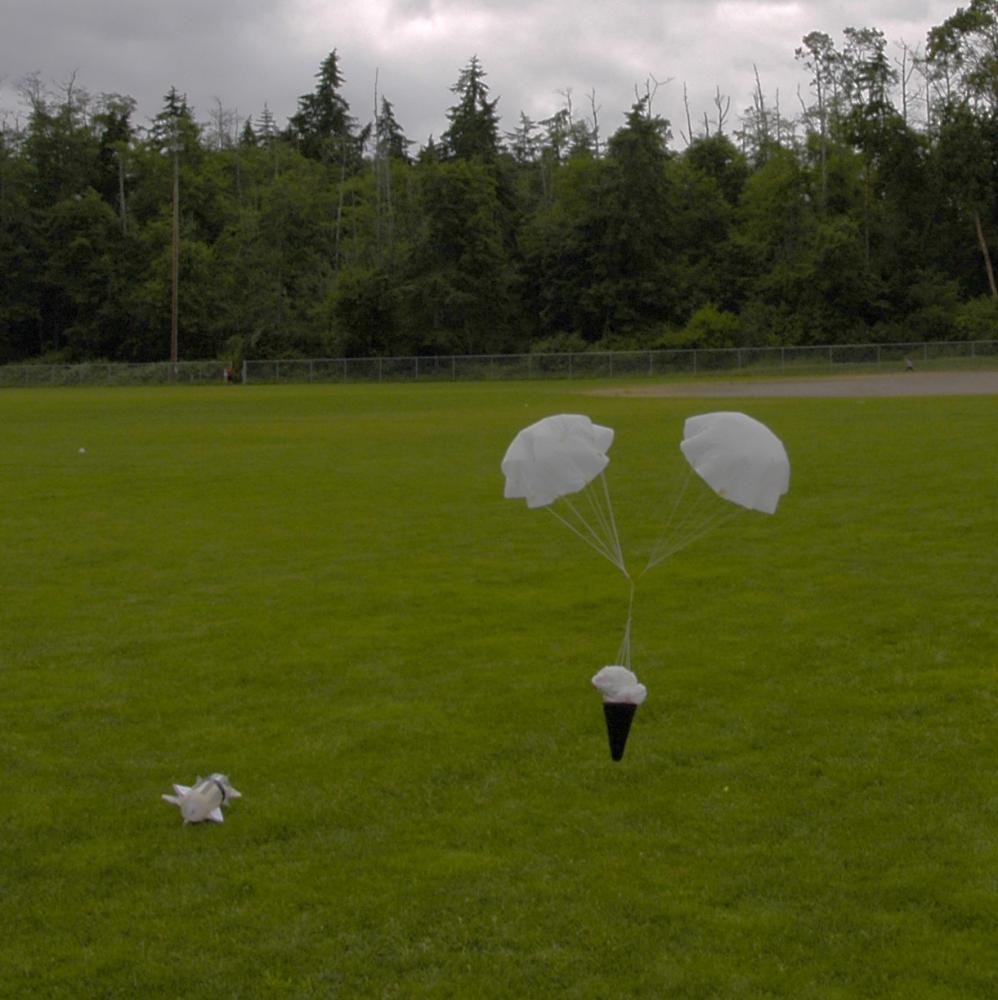 The Egg has landed. 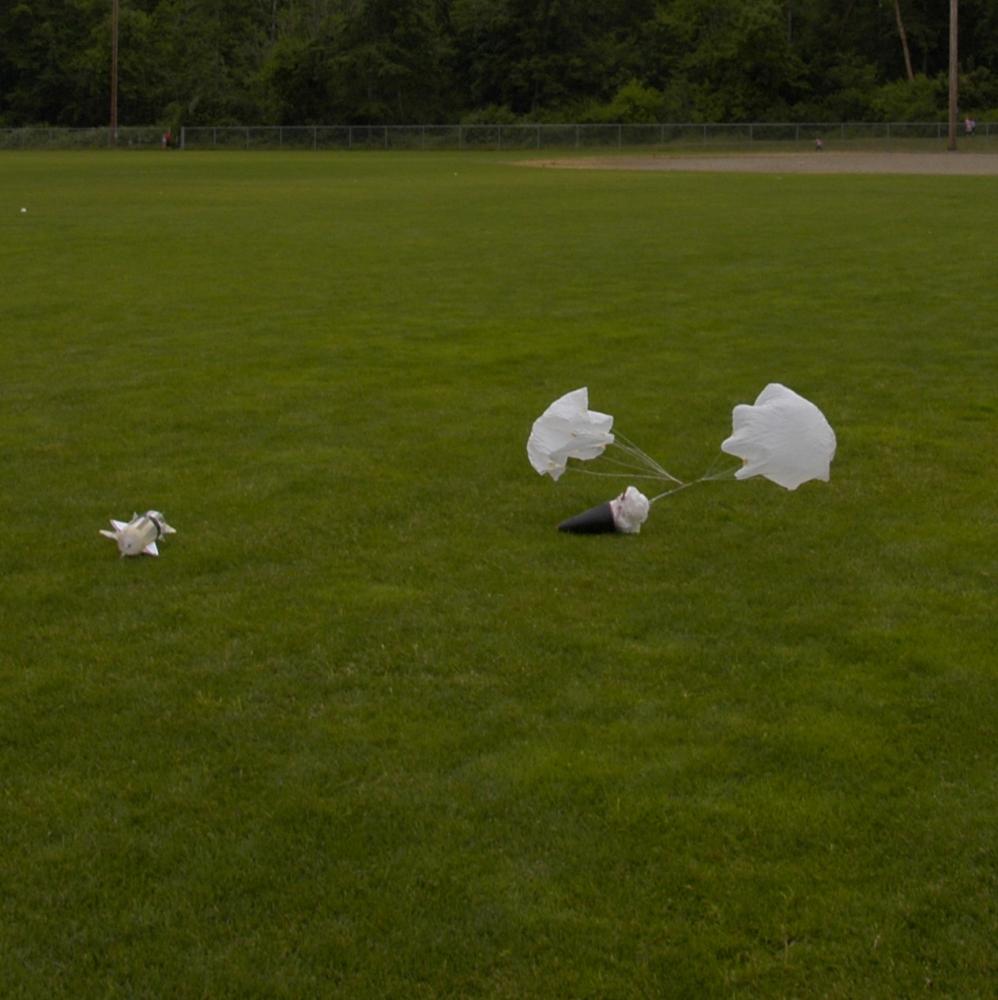 You know I'm glad you started this thread. I forgot that I have both the Quest and Estes water rockets up in my closet. Time to break them out - especially given a heat index of 105F today.

That's really cool, excellent work, He deserves a brand new rocket to build for that.

Actually I am thinking of ordering him a Dueces Wild and a Tres. Keep him busy for a week or two.


So how many points did he get?

Pretty Sweet! Congrats to your son.

Have you seen the Air Command Water Rocket site?
https://home.people.net.au/~aircommand/index.htm

Some pretty advanced stuff there!


So how many points did he get?
Click to expand...

He got credit for a 70 pt flight. The one I took pictures of would have rated about 120pts if he had asked for it. He already had an A in the class, so he didn't push it.

jorpet: Congrats to your son for the nice flights and the good grade! Lofting eggs on water rockets often is not as simple as it may seem. You really have to think about the G-forces on take off as well. Thanks for sharing the pics

I was interested at what pressure was the rocket launched and what size nozzle did he use?

There has been a regular aquajet cometition at IRW in Scotland for some years, no deployment, just soft nosecones and an angled trajectory, the object being range rather than height. 2L rockets are fired at 70psi. 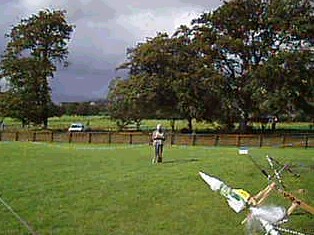 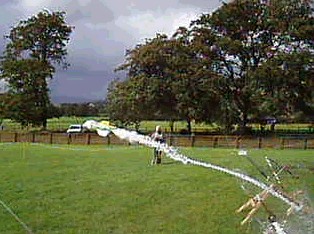 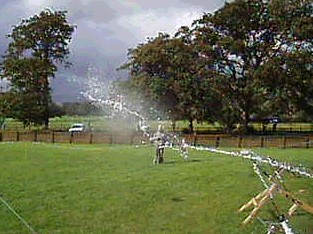 air.command said:
jorpet: Congrats to your son for the nice flights and the good grade! Lofting eggs on water rockets often is not as simple as it may seem. You really have to think about the G-forces on take off as well. Thanks for sharing the pics

I was interested at what pressure was the rocket launched and what size nozzle did he use?
Click to expand...

We were launching most around 90 PSI, the last one was only about 60 PSI due to a leak in the line that we couldn't get stopped. The nozzle was just the full opening of the 2-liter bottle since that is what the teacher's launcher requires. It is just a rubber stopper with bicycle type filler on the end. Very simple and mostly indestructible since it is used by eighth graders.

On tonight's Late Night with David Letterman, he launched
one of these-
https://www.ohgizmo.com/2009/04/13/titan-blast-inflatable-water-rocket/

You must log in or register to reply here.

B
My rockets are too heavy