What started it all for me as a BAR was building my favorite rocket - an Estes QCC Explorer, flew on an E9-4 opened my eyes to an unknown hobby and TRF, MPR and HPR.

So I wanted to build an upscale that my son saw while we were at LDRS 34 (JJSR ) had an upscale scratch build QCC. Then MAC Performance came out with a Vought VTS-6 that I built which is what looks to have been the inspiration that John Boren may have used to create the QCC Explorer (maybe Jumpin Jet will chime in this as this is just my assumption).

As I've been planning my L3, really wanted to honor how it started for me. In all honesty, I am really the assembly guy and several other craftsman came together to really create this for me. So between Tim Lehr at Wildman, Nat Kinsey at Upscale and Mike from MAC Performance this is starting to take shape - thank you all!

Base rocket - 6" Ultimate Darkstar with extra 6" of payload - 360% upscale for a QCC
Fins - Nat Kinsey G10
Air Intakes - Mac Performance Canvas Phenolic made at my request by Nat with the blessing of Mike
Recovery - One bad hawk custom made by Teddy
TAPS; Gus Peipenburg and Eric Cayemburg
Planned motor pending final weight and waiver: AT M1939 or N2000W
Planned flight: when its done but hoping for Midwest power or maybe 3oaks this fall.

Documenting build thread for my taps, thanks for watching and advice, this may take awhile. Thanks to GRIFFIN for some great advice on NC and separation charges & recovery harness as he has many Ultimate darkstar successful flights.

With the Faux intakes going to try to make them whistle in 2 of them 180 degrees apart, then maybe something special in the other two if time permits.

That looks like an awesome L3 project Nick, best of luck. I'll be following this one

I'll be watching this one too. op:

Thanks for the OR file K'Tesh, been very helpful

The only issue at this point will be the air defuser out the bottom end. Going to try and have this printed but may wind up left off due to the heat of the motor.

Still can't get over how nice that 4"er came out. This L3 monster should be spectacular.

[email protected] said:
When it is finished it will look like its smaller 4" brother

The only issue at this point will be the air defuser out the bottom end. Going to try and have this printed but may wind up left off due to the heat of the motor.
Click to expand...

I think it says a lot about Mike from MAC that he was cool with having parts (upscale of his intakes, or modified?) made from his signature material through his own supply chain. I don't know what financial arrangement you all have (and it's none of my business), but it speaks to the benefit of being upfront with reasonable people.

The 4" came out great also. This will be a beauty when it is done.

Very KOOL Nick! you beat me to it LOL
I've been wanting to upscale it again, but that darn thing "WORK" (and I mean that as a dirty four letter word) keeps getting in the way of my rocketry building.

Best of luck with your build

I'm hoping you'll be going to LDRS at MDRA next year, so I get a chance to see her fly.

Yes Mike at MAC Performance has been awesome, again a testament to the hobby that other want you to win too.

Looking forward to the build!

Wow; sweet. Checking in; can't wait to see this one develop Nick!!! This is going to be sweet, and I LOVE LOVE LOVE the motor choice(s)....nothing beats big White Lightning!

This will be a great rocket! I sure hope the parts all work out, this is quite a complex design with many non-obvious issues that have to be attended to. Happy that UpscaleCNC has been able to be a part of designs like this!

Oh hell yes. What an awesome design; I'll be following this one for sure.

Not much to post yet, just sanding everything for assembly. My TAP was kind enough to lend me a 98mm case for a little while, so I used a flat surface with some 220g and the case to sand the end of the motor mount tube true (have to improvise when ur in a hotel room).

Also worked on my documentation, parts list, checklists
, procedures and AV Bay schematic. Thanks to some people on TRF that post some of their paperwork, this made much quicker work to the checklists, just had to re-write to apply to this L3. I'll try and post on here soon.

as of now almost everything is ordered and nearly received except for Chutes, motor casing and motor. I plan to order hardware very soon.
Last edited: Aug 2, 2016

Received my SC Precision thrust ring today, very nice piece. Today I measured up the motor mount and made some small jigs to hold the front centering rings in place and figure out the placing of the rings. This will be important since the SC thrust ring will transfer some of the the load to the airframe.
Unpacked all my air intakes and fins from Nat @ UpscaleCNC, he was nice enough to make a few extra pieces just in case.

Just really figuring out the order of assembly since I really don't want to slot the booster tube , instead I plan on leaving off the rear centering rings so I can do internal fillets.

Prepping front centering rings so the Y harness can pass through.

Tomorrows plan will be epoxy in the Y harness, front centering rings, plan locations for rail buttons and hopefully more

AT M1939 or N Nice choice due to the CTI availibility issues. I wonder where you can score one at a reasonable price? (Yes Nick this is a hijack advertisement:wink

Made two fin guides with areas for the intakes. These guides are 36" square plywood, they are huge. Thoughts of where am I going to store this rocket? Hang from ceiling likely.

Since there are no instructions this takes some pre thought on the order of assembly - TTW fins - however they go through the air intakes, so the intakes will be installed first. Everything is going together to mark and verify the order.
Now let the over building begin in earnest. I admit I am an over builder which I think that I over analyze. Just have to feel my own comfort level that everything will hold together. You never know - I don't see an O3400 or N10,000 in the future but i find myself in White sands, argoni or black rock and several spare $100 bills... As Tim told me, it will handle anything you can fit in it.

Choosing to use all 4 centering rings On forward on rear - then the other two next to front and back of the fins. Also change the Y harness to tubular Kevlar, which is now attached via rocketpoxy. I'll be leaving both rear centerings off for internal fillets, but I did set the two fronts in place so I can install in booster to mark all the fun positions and figure out holes for the 1515 rail buttons.

Also unboxed the intakes to prepare for assembly this week 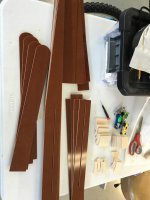 Man, the 4" is sweet. That monster is going to look great.

Nick, just wanted to check in and, mention that everything is lking gd!

I was really impressed with the "Paperwork" you sent the other day and, I have no reservation in saying that this will be a premier flight st MWP14 this year!

Your doing better than me....at least building something and, beautiful it IS! :surprised:

Mr. Nick will you be bringing the work in progress to the sod farm Sunday so we can oogle is?

How did I ever miss this? Subscribed! Good luck Nick, I hope I get to see this fly come launch season!

Thanks Gus, really appreciate all your help and advice on this project

Hey Bob, have to work this weekend, not much to show yet unfortunately. Will try and contact you soon on the engine


Thanks Ryan, not sure if I'll fly it at 3 oaks but will at MWP if your coming? Hope to see you there. If I can find the $ I may bring to 3 oaks. Hopefully I'll come to 3 oaks a time or 2 through the flying season

This is my first venture with West epoxy which I purchased from Wildman with pumps, silica and chopped CF - I love these pumps, so easy! So I decided to do a test with CF and silica and time it to see how long it takes to set. Mixes very thin and Took about 1 hr to set, so I will likely do my fillets with RocketPoxy.

Mixed up some chopped CF (just a pinch) with west 205 and started assembly of the UpscaleCNC/ Mac Performance air intakes.

I should explain the air intakes, what I'm wanting to do it to make the rocket whistle on 2 of the intakes and motor tubes on the other two intakes for a cold smoke emitter after motor burnout. So I drilled the forward intake bulkhead to accept a 24mm motor tube, the the middle bulk head I drilled (2) 3/8" holes and countersunk them. I epoxied those in reverse, and will then make a square opening just ahead of the front fin fillet to create the whistle noise. Not really sure if this will work but it should. Also I will balance out the intakes with the motor mount and and the whistle 180 degrees out. In the future I can always plug all 4 to eliminate any air going through the intakes.

Also sand profiled the edges of all the fins with a power sander, this is not for altitude, just for cleanliness. This is a very air draggy rocket after all.

A friend of mine owns a butcher shop, so he hooked me up with some butcher paper for fiberglassing my small QCC.

My flight plan for the L3 will be to have to Estes QCC Explorer, the 4" MAC Performance VTS-6 ( which I turned into QCC explorer and the 6" Ultimate QCC Explorer and fly all three in that order. (Hopefully I'll be flying more rockets at MWP but these will lead up to my L3 attempt).

Drilled all my shear pin, river, air sampling and vent holes. Once I drilled one, I set it upright and pulled down to drill the rest, my garage ceiling is too short to assemble the rocket in.
Had a little gap in the AV and payload, but with a sanding block was able to get a pretty good match.
Also drilled my indent holes for indexing