I saw this at the Hobby Lobby and it looked like a fun low-power rocket that wasn't the usual 3-fins-and-a-nose-cone. It'll look good on the shelf and be good for backyard launches. The Lunar model uses paperboard instead of balsa, but maybe it is better than such thin balsa. Construction was very straight forward, but you need to do a lot of painting first and then assemble it. Either that or be a lot better at masking than I am. I assembled the three legs and painted them separately, masking off the root edge where it would glue to the main body tube. I built the top assembly and masked off the part that goes into the body tube. I painted that metallic gold with the last bit of a can of paint that I had. I hand painted the other small pieces with Testors metallic gold, which flows out and doesn't show much in the way of brush marks. I left the body tube unpainted since it seemed to be white enough, and spray painted the large ring gloss white. The little fins on the upper section insert into notches on the landing legs, so pay close attention to making sure everything is equally spaced at 120-degrees. In the case of the legs, the plans have a template, plus the rings have notches that the legs plug into. I used a bit of blue tape to anchor the legs to the template while the legs cured. I used my usual wood glue to bond the rings and the legs to the body tube, and for bonding the upper assembly into place. I used dabs of epoxy to glue the large ring to the legs and for those fillet things on top of the legs. I don't usually glue painted joints, but I figure in this case, stresses are low enough that I can get away with it. I notice that the instructions call for using a booster engine, but I think I'd prefer a plugged engine in order to minimize the powder mess on the upper body. Or maybe put a bit of wadding in the top.

Again, a fun little build to do while sitting in on zoom calls. An up-sized version of this would be entertaining, other than having to make all of the cutouts. 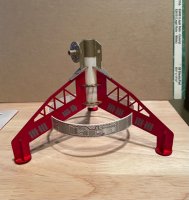 aerojacket said:
...An up-sized version of this would be entertaining, other than having to make all of the cutouts...
Click to expand...

For an upscale, you could make just one cut out, and fill in the braces with individual pieces, or build it up from separate parts (balsa sheet or ply, depending on size/power) glued edge on and paper over the assembly.
B

If you were to Up-Scale it, either laser-cut or 3D print the fin/legs.

aerojacket said:
An up-sized version of this would be entertaining, other than having to make all of the cutouts.
Click to expand... 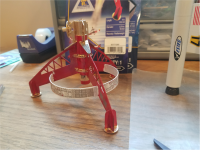 You guys should add your pics to the Lunar Scout Gallery:
Estes - Lunar Scout (#7290) Gallery | The Rocketry Forum