I just wanted to get a few eyes on my first two flights with my RRC3 (or any electronics for that matter). I first noticed that my peak altitude was about 200 ft short of sim, not a big deal just something that caught my eye. However I've now had two flights where I know the launch and landing locations to be the same altitude yet the altimeter shows -150' on landing. Has anyone else experienced this? Is this where my missing peak altitude is going? Do you see anything concerning before I start flying this combo higher?

View attachment 112115i218.rff - RRC3 and DDCS2 were both set up for drogue at apogee and main at 600'. Drogue failed to unfurl and Main ejection charge split the seam of the nosecone which muffled the charge and failed to separate the forward body tube. The impact with the ground shorted out the switch to the battery but it looks like the capacitor continued to provide power and the altimeter went lower and lower.
Last edited: Oct 23, 2016
M

More information about the rocket please, where was the Av-Bay located, diameter of rocket, static port sizes, location of static ports in relation to nose cone. Do you have a RocSim or Open Rocket design file for the rocket. Photos of the rocket before damage would be helpful. Was the rocket a stock built kit, if it was a kit what kit?

Its not unusual for sims to be inaccurate to some degree depending on the settings of the program used. For example in OR the finish (smooth paint, polished, etc) can affect the altitude by the amount specified, there are many small variable that are just not able to be put into sims.
M

I'm not concerned with the sim being off as much as the RRC3 registering -150ft every time it lands at the same altitude it took off from and that this might be indicative of some future failure.

There's no damage to the rocket (even after coming down under a unfurled drogue). It's a 4 in Apogee Components Level 2 kit. The ebay is 8" x 4" with FOUR 1/8" static port holes. Although if this was a static port hole wouldn't the RRC3 altitude rebound once the rocket sat on the ground and the ebay pressure normalized?

I've not used an RRC3 but I wonder if perhaps your altimiter bay is not sealed from the ejection charges and this is wrecking the calibrating?

edit - Other factor could possibly be temperature difference between on pad and in field, color and ventilation/wind may contribute to this. I don't think atmospheric pressure change is likely to be an issue provided your flight time is not huge.
Last edited: Oct 23, 2016
M

SpaceManMat said:
I've not used an RRC3 but I wonder if perhaps your altimiter bay is not sealed from the ejection charges and this is wrecking the calibrating?
Click to expand...

Ohhhh now that's an interesting thought.... the sharp altitude drop during the drogue ejection charge could mean the ebay is seeing a sudden increase in pressure and who knows what that does to the baseline. I'll see what I can do to better seal the fiberglass lid. Vaseline?

I use this stuff for sealing any wire penetrations thru AV bay lids:

Use Silicone RTV. Squeeze it into the holes for wires coming through bulkhead, onto the nuts and all thread- pretty much anywhere site could leak in.

timbucktoo said:
I use this stuff for sealing any wire penetrations thru AV bay lids:

+3 on poster tack. I keep a pack of it in my range box. it's incredibly useful.

I was crawling through the Altimeter data from my L3 and I'm experiencing something similar.

4" DX3 XL. 12" AV bay with 3x(3/16") ports. Aluminum bulk plates sealed with JB weld around the wires. Also sealed the screw holes for the terminal blocks with JB. Threaded rods were not sealed but were extremely tight.

Stratologger CF and RRC3, both mounted near the AV band, and on the same side of the board. Gap on each side of the mounting board was around 1/16", but the board was only 9" long. 1.5" Gap from board to either bulk plate so plenty of breathing space. Two of the ports were on the side of the board facing the electronics.

Both altimeters report very consistent results, but the results are weird.

It seems apogee occurred very close to 13.9k, and then altitude increases to 14.1k over the course of a full second (20 samples). When the backup drogue charge pops, there's another altitude spike. It could be that the rapid acceleration due to the charges going off caused a pressure gradient in the AV bay, but I feel like the static ports would have equalized pressure in less than the half a second it takes in the data to start correcting.

Both altimeters report the landing site being 500-700 feet above the launch site. This was at Airfest... as in Kansas... As in God's reference surface for machining. I'm glad I set the main for 1200!

Anyone else seen this before? Should I have tried to seal the point where the aluminum mates to the coupler? I had it all tightened down pretty hardcore.

Send an email to Missile Works about this thread, asking for help. Likely he'll be able to help figure things out, just remember that he has a day job, too.

As an aside, what software build is everyone using in their RRC3s? There are 3 or 4 different versions out there now, I think, and that may be a factor why some have issues and other don't

I don't think it's the altimeter.

Stratologger and RRC3 had consistent data sets. They both show the anomalies at identical times.

I'm just wondering what behavior people are used to seeing when they get blow-through.

I have a similar issue as well. I flew my Madcow super DX3 a few times with a rrc3 and rrc2+, micro peak altimeter and a JL3.

The temp was 96.8° on start up, 103.8° on launch and 101.8° at landing. I looked at the barometric pressure from launch to landing, it was higher at landing then launch, a smooth ramp down and back up. IDK if it's an issue with the 300' launch detection and the algorithm used to calculate back to launch, I saw a setting to record data pre launch as well, I might try that.

My H160 flight was off more from the data file from the rrc3 but I added the -altitude at landing to the apogee number and it matched the JL3, micro peak, and rrc2+ apogee numbers.

But now that I look again the data is different from the graph screen to the flight log manager.

I am thinking on making the holes bigger as well, the one I use for the switches could be larger anyways to help get the screw driver in for turning them on/off.

Hot-melt glue is another option for sealing avionics enclosures around wires and other penetrations.

OverTheTop said:
Hot-melt glue is another option for sealing avionics enclosures around wires and other penetrations.
Click to expand... 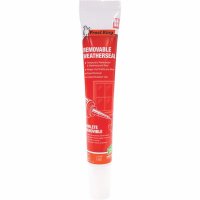 I use silicon rtv

Is there a range of airframe diameters within which an RRC3 not work?
2

RRC3 recorded no data and did not beep out altitude. PROBLEM -- OR NOT?