Odd'l rockets newest addition to the fleet is the Squatty Body.
got this sent from the States, and it arrived in the UK just in time for some of the worst weather we've had ever.
the Squatty Body is a small rocket that is designed to fly on a small field, but unlike most small rockets, you actually get this back. unlike the mosquito "fire and forget" rockets that have been sacraficed to the rocket gods.
my first thoughts when i got the kit was that its a nose cone, where a bit of a rocket body has been added as an after thought!

The instructions for the kit are probably the best set of instructions i have ever seen. The diagrams are very clear and every possible gotcha is removed. They also include some technique tips such as double glueing etc.

The build is not complex.
First stage is to make the motor mount, and then add the motor hook, centering rings etc.

So what kind of recovery device does it use and how does it fit in where ever it goes?

Uses streamer recovery, and the streamer fits in between the nosecone and the motor tube.

BTW, today is the last day of JonRocket.com's Holiday Sale. You can save 15% on the Squatty Body kit today:

Next the fins are attached. The instructions come with a sheet that makes aligning the fins easy. The balsa is nice and strong. Before attaching the fins, they were given two coats of sanding sealer.

The shock cord is in two parts. kevlar cord is anchored to the motor mount -Quest style, which is then attached to the elastic shock cord. The overall length is two foot, which is ample given the size of the rocket.
The problem of attaching the shock cord to the nose cone is solved by fastening the elastic to a small section of hexagonal tube. This tube is then attached above the inner lip of the nose cone.
Mine had quite a tight fit, and i understand that all future kits call for the hexagonal tube to be shallower on one side.

The nose cone is weighted by adding a supplied amount of clay, this is then sealed in with a covering of glue. i chose to use aluminium (British spelling - i think USA is aluminum) tape to seal the top of the clay.

At the same time i added a launch lud to the body tube.

In answer to the tight fit of the hexagonal plastic tube -
It was a close fit, even on the prototypes. All the new kits (this is a new kit, Matt did get one of the very first ones) have been adjusted and the instructions updated.

Now the rocket is built, i sprayed the entire rocket with white primer

the recovery system is a silver mylar streamer, this is attached to the shock cord about 1/3 of the way done from the nosecone.

both of which i would recommend.

Here's a shot of my new Squatty Body.

Dragon rider, that's a nice looking squatty body, like the orange nose cone. how did it perform?
Last edited: Dec 14, 2009

written a review of this rocket on EMRR. link below:

The instructions are detailed on how to prep the rocket for flight.

The Mylar streamer is folded as opposed to wrapped around the extended motor mount tube. No wadding is needed as the ejection charge blows the nose cone off.

The squatty body lifts very quickly on a full A. Despite the winds, she flew straight, and ejected the streamer just after apogee. The streamer does not do much to slow the decent, but does help spotting the rocket in the air.

Exactly the same as the first flight.

On a B, the rocket leaves the pad in a blink. Gaining enough altitude to make it hard to see, but still trackable. Ejection at apogee. Recovery is fast, but again close to the pad. Some slight charring to the mylar streamer was found, probably caused as the streamer deploys/opens as it passes the top of the extended motor mount tube. The Quest motor seems to kick out far more black soot than the estes motors, and this caused a most of the blackening that the top of the motor tube recieved.

The estes motor was a bit slower than the Quest, but the flight was very similar.

This time the streamer was removed, and break apart recovery used.

Flight was good with ejection at apogee. Recovery was faster, but this is a tough little rocket. The top of the motor mount is getting covered with ejection charge muck. The shock cord is showing some charring.

This is not a recommended motor, but I thought Id give it a go.

The rocket leaves the pad quickly and just keeps on climbing until it disappears, I was able to track it for a while with the delay smoke. I spent half an hour wandering around in the scrub and the neighbouring golf course but to no joy. Packing up, I headed back to my lab, luckily 500 meters from the pad on the way back I found the rocket.

Gillard said:
Dragon rider, that's a nice looking squatty body, like the orange nose cone. how did your perform?
Click to expand...

Thank you, I thought the colors came out nice as well. This was one of the first kits Odd'l Rockets put together (#3 per the face card) and does not have the new shock cord lug. As such the nose is a little mis-fit, but that doesn't seem to hurt the performance.

I flew it first on a C6-5, I think, and it was lightning fast. I didn't have the streamer installed and it came down fast. I was flying near the woodline and it happened to land in a fallen tree. It hit a branch hard and popped a fin.

After repair, I flew it on an A8-3 which worked well. I had the streamer this time, but it melted entirely away with the ejection. I may have had the streamer stuffed in the tube instead of accordion folded beside it when I flew the rocket. I'm not certain, but I think I had experimented with that. I have a feeling I had it assembled with the streamer in the tube and no wadding.

I popped a fin there too. So, back to the bench she goes for next week's flights.

wow, a C6 for the first launch.
surprised that the fins popped, even when mine fell without the streamer on a C6 there was no damage, but then again mine didn't hit a tree, which will be harder than balsa!

Flew her twice again today, both times without the streamer.
Had near perfect conditions, no wind.
First flight was with an Estes A8-3, flew straight, ejection after apogee.
Second was on a B6-4, great flight, noticed some roll on the rocket on the way up, flies high on a B but easily trackable. recovers fast but with no damage.
The twenty children that were there rated this as there best rocket out of the ones that flew, esp the B6 flight.

To Dragon Rider,
Sorry, you can't put the streamer into the body without wadding. Well, you can - once! Originally, the model was simply "Break-Apart" recovery - no streamer. I added the mylar streamer simply to help track it when flown with Bs and Cs.
From experience, I don't use Cs in the Squatty Body. It flies fine with Cs, but like you, I was lucky to get it back.
To Gillard,
I'm glad your having great success with the Squatty Body. Kids (and bent adults) are always attracted to something a little out of the ordinary. Maybe England's bad weather is over!

If you want a clue as to what might be coming from Odd'l Rockets, check out the "Christmas Rocket scratch build" thread and Roger Smith's video in this LPR section.

hcmbanjo said:
If you want a clue as to what might be coming from Odd'l Rockets, check out the "Christmas Rocket scratch build" thread and Roger Smith's video in this LPR section.
Click to expand...

I saw the christmas tree and wondered if it was to be a personnal one off or hit the production line.
Looks good.

The best Squatty Body photo EVER. Leave it to my photographer father to get a good one! The model launching the rocket is my wife who is not a girl scout. 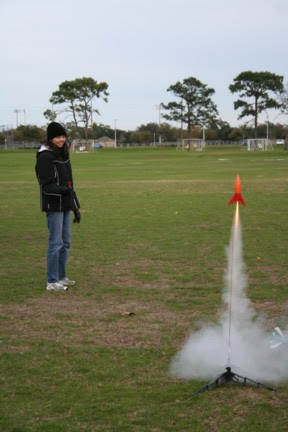 I have to agree - that is:
The best Squatty Body photo EVER!

Thanks for posting it!

Fred22 said:
A smile and a rocket How does it get any better
Cheers
fred
Click to expand...

She would never admit it, but I think she's starting to like rockets. I didn't even get an eye roll when I mentioned us going to the NEFAR launch Saturday in 30 degree weather.