Has anyone thought about getting one of these 1/100 LUT unites for building? Some might want to construct it to use as a lunch platform.https://educraftdiversions.org/ I know its made out of paper so work would have to be done to make it hold up for a lunch.

This would be a nice display unit for the new Saturn V SEMROC is bringing out soon I hope.

If someone is intersted in this LUT or Crawler here is where you can get them.https://shop.ebay.com/merchant/d-condave

Mine was built almost entirely out of balsa I stripped myself and shaped from a KFC postcard I recieved from my grandmother during her Florida vacation one year.

I didn't include the crawler as this was a working launch platform with remote controls the drew the access arms in and out. rotated the crane 360° in both directions and raised and lowered the winch.
The Custom contoller was set up for either standard or Cluster Relay ignition as my Estes Saturn-V could switch from 3 C6 motors or a Single might D13 Later downgraded to D12's.
The Tower, base and crane came apart for transport in the trunk of my Old Dodge Dart.

The Tower was distroyed by vandels, during a break-in in the late 70's, after taking more then 1000 man hours to construct, I've never had the energy to rebuild it even though I kept the complete base and crane.
maybe someday? I do have a smaller LUTs paper model I'm working on that I plan on using with a small micro powered Saturn-V and Saturn-1b models at some point.
The Saturn-V was eventually retired with 139 flights (our club Section Number).

A Complex 39A LUT pad is a very worthy project, as it's full size counterpart is all but completely gone now. theres a LUT's yahoo group you might want to take a look at. they have extensive photos of the disassembled parts of the tower laying a Fla boneyard somewhere.

I have a 1/144 scale one I am working on now. I plane on building the 1/100 scale next. I may give some thought on using it as a lunch platform. I belive Dr. Zooch was talking about selling a LUT kit to go along with his Saturn V.

Saluki said:
Has anyone thought about getting one of these 1/100 LUT unites for building?
Click to expand...

Your tower is great every time I see it. That's an impressive piece of work. Didn't know about the vandalism, that's just rotten.

I agree it is a steep price, but he is the only game in town. I'm sure if you built one. Had you newly fresh painted 1/100 scale Saturn V resting on it looking like it was going to lunch any minute, I'm sure $65.00 wouldn't enter your mind. I'm also sure everyone who layed there eyes on it the first word out of there mouth would be WOW!

Anybody got a website for plans or drawings of the LUT??

I was thinking about using gas welding rods soldered together with a torch... should be fairly easy to do with my farm shop stuff...

Luke there's alot of information at the LUT Group.https://tech.groups.yahoo.com/group/LUT_Group/?yguid=61130565

Look around in this group links.

Look around in this group links.
Click to expand...

Thanks for the link Sal... I appreciate it! OL JR

I received my 1/100 scale LUT from DM Productions to go alone with my ESTES 1/100 Saturn V thats still in the box unbuilt also. I have built there 1/144 scale LUT a couple years ago so I have some idea what it take to do one. The 1/100 LUT looks to be quite a bit more work to it. I had the thought of doing a build thread for the LUT if anyone would be interested in one. After looking over thinks this build thread could take some time as slow as I am. A farm house Im working on and my Harley that my wife and I are on all summer long leaves little time for fast builds. Ill give it some thought.

I was going to build one to go with my estes satern V but after I began the planing of build I came out of work to care for my father. I still might build one but it will wait. as mine was going to require alot of soldering due to the fact that i was useing brass I and H beams.

I'm embarking on a project to build a 1/100th scale version of the LUT and Mobile Launch Platform. I know this thread is more than 10 years old. Just thought I'd revive the idea and ask if anyone has tips on building one to launch the Saturn V from without burning it down.

I might buy the paper kit to use as a template for one that could actually be functional at the range.

I had the paper kit, until my cat tried to climb it.
It would make a good template, but it will be very time consuming.

As I have gotten older I find I don't have the room in my home for a big display for a large Saturn V LUT.
What I would like to see is a good Saturn V LUT for Estes 1/200 scale Saturn. I know at that small scale it is hard to build one. I have a 3D printer and have tried to scale down the Saturn V LUT I found on Thingivison for that size. The structure is pretty small and the pieces are a big puzzle to put together. I wish somebody that had skills in CAD drawing would draw 3D files based on the way Metal Earth has there Saturn V LUT parts laid out for 1/200 scale. 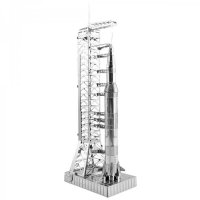