Nose cones are my least favorite part to roll from paper. And this model has two of them! A lot of work for something that never looks that good anyway. Glue tabs and transitions cut out: 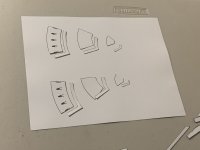 That last little transition is always a pain: 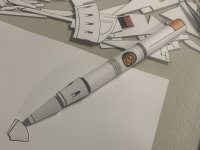 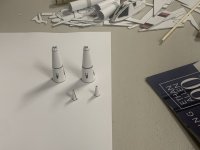 All the cardstock parts have been built, this is basically kitted up now, except for thrust and centering rings, which I roll to fit by hand and a coupler to attach the noses to the bodies. The rest of the build will basically just follow along the kit instructions now. Building the canopy is actually Step 1, and that is already done. 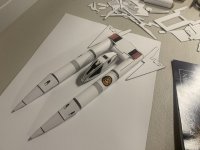 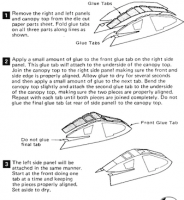 Great work so far. I was wondering are you going to show how to find the CP and CB and where to add weight for flight?

I LOVE your detail wraps!

Most flat details were thin plywood, Canopy was thick card stock cut out and folded.

Saluki said:
Great work so far. I was wondering are you going to show how to find the CP and CB and where to add weight for flight?
Click to expand...

Thank you for the kind words. Since I am committed to 13mm power, I will weigh it, and add as much clay as I can to keep total weight under the lift off limit for an A10 and split that clay into the two nose cones. That is usually conservative, since the cardstock models are usually lighter in comparison. I might try to swing test, but this one might be hard to harness up for that. I suppose I could use the cardboard cutout method to get CP.

I like to use the cardboard cutout method to find the CP. I believe a swing test would be good to find stability.
I'm thinking about starting a build of this model using your patterns. Have you given any thoughts about a Draconian MARAUDER in the
same scale as your Starfighter?

Saluki said:
I like to use the cardboard cutout method to find the CP. I believe a swing test would be good to find stability.
I'm thinking about starting a build of this model using your patterns. Have you given any thoughts about a Draconian MARAUDER in the
same scale as your Starfighter?
Click to expand...

I was looking at the Maurader, man that is a lot of cardstock, I can’t even think about starting that until I finish this one. Abandoning a partially built rocket to start another one would be so draconian.

Getting the wings on and one main body tube attached, letting the glue dry on that side before attaching the other one.

I have to fill the gaps in here, I could have done a better job dry fitting these first, but the other parts will hide the gaps. When these fully dry I will add some fillets along the body/wing joints. 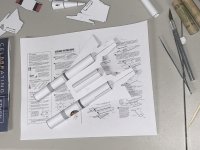 Lower plate/supports and shock cord retainer/former are in place. I need to tie a long Kevlar leader on there before attaching the lower body plate. I will add some extra layers to that part of the Kevlar anchor point, seems a bit thin for that right now. Might be better to drill two little holes in that thrust ring at the end of the center body tube in front of that bulkhead, and thread the Kevlar through that, hmm, I may come up with something, like add another thrust ring segment that mounts inside that end of the body tube and add a small notch for the cord.

Small thrust ring segment to tie Kevlar around will get glued into the central tube with a notch to hide the cord behind the shroud. Dry fit shows how it will work. This will save the lower former from possibly getting ripped out during ejection.

I really like the way you show each and every step you have taken. Good instruction build thread.
Thanks.

Thanks! After anchoring the Kevlar in the fillet of white glue, I think that thrust ring anchor was probably overkill, that line won’t rip out. Just about ready to attach the lower body panel. It gets exciting when the parts pile keeps getting smaller as the rocket build gets bigger. 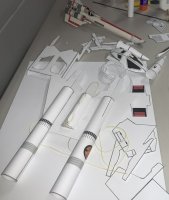 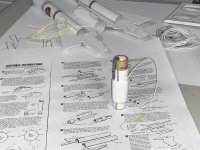 17. Got the lower panel glued on, will add fillets once that has dried. Deviating from the kit, I am using about 3x body length of Kevlar on the main body, and a short leader on the engine pod, for heat resistance. These will be joined by about 3x body length of elastic cord. There should be plenty of room for this and a small chute in the body compartment. 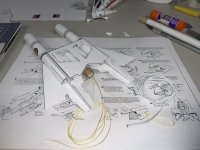 just waiting for the fillets to completely dry tonight, then will add the front lower shroud and lower body panel doors tomorrow to complete the parachute compartment.
Last edited: Mar 12, 2022

14. While waiting for that other glue to dry, I found a toothpick and cut it in half to attach to the lower wing fins. I might just leave them bare wood. I do have some fine tip modeling brushes and white acrylic paint though, I just don't want to get any on the paper. I could have painted them first with a masked stripe for the glue. Maybe I can go over them with a Sharpie pen, either black, silver metallic, or a red? 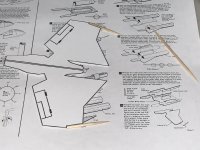 I'm confused to where the chute goes?

Where the Kevlar line goes around the extended tube and the parachute is wrapped around the inner core of the H protected from hot ejection gas.

So how does your pop pod stop the charring of the parachute?

cbwho said:
Great build so far
I'm confused to where the chute goes?...how does your pop pod stop the charring of the parachute?...
Click to expand...

Thanks! The center body tube is totally filled by the engine pod. The chute goes in the body compartment between the center tube and one of the side tubes. See the picture in step 35. It is just packed in there sort of friction fit, which is why these commonly fail to deploy. If too lose the chute can fall out, if too tight the chute won’t deploy.

That is also a good question, it makes me think. I might try to custom fit a shield of baking parchment paper, kind of like those paper burrito wraps to help shield the chute from the hot gas, but it probably won't get any direct exposure long enough to melt it.

Alternately, I could use a technique like the Satellite Killer, where a strip of thin paper is used to retain the chute in one of those open tubes as a shelf on the bottom with one end secured in the rear-eject motor mount. One end of the retaining paper strip is released by the motor mount at ejection, so you have a shelf to hold the loosely packed chute in place during thrust/coast. Kind of hard for a downscale model this size to fit something in there like that, but I might give that a try.

hopefully I can incorporate something like that to avoid the most common failure point of this kit.

Update: Maybe I can use retainer strips on both sides and use two smaller chutes that are more loosely packed and more likely to unfurl. I am getting a bit concerned about total weight, I hope I will have enough margin to add the nose clay.

Also, it would be cool to rig up a shroud line harness so the model descends under the chute in a horizontal "gliding" orientation, like the SR-71. For higher drag, and general overall coolness factor. Not sure if the external shroud lines over the top would survive ejection, I am still thinking on that.

I've never seen that SR71 parachute rigging before. Very clever. I have a NASA pegasus clone that I will try that on. I assume some sort of notch is made on the cone? Also probably need extra reinforcement to prevent zippering?

cbwho said:
I guess I

I've never seen that SR71 parachute rigging before. Very clever. I have a NASA pegasus clone that I will try that on. I assume some sort of notch is made on the cone? Also probably need extra reinforcement to prevent zippering?
Click to expand...

The shroud line that goes into the body under the nose cone shoulder is a thin chute cord line, it can fit in between the nose and that size body tube within the tolerance, it might stretch a groove into the body tube after a while. You can put a drop of CA at that spot on the tube to reinforce it a little. 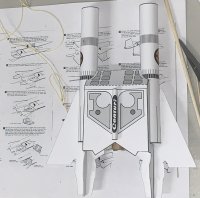 Now it’s a party! These panels close off the lower body chute compartments.

I took some liberty with the shading on these panels when I drew the template since these parts are not embossed like the original. I also like to put logos on the lugs, I mean why not?
Last edited: Mar 13, 2022

Just a dry stack up of the remaining parts, with another member of the fleet waiting for a new buddy.

Another dry fit test, the template has little fin marker lines to help position the fins. 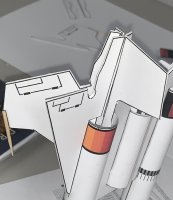 22 & 27 Lower wings and vertical fins glued in place and drying: 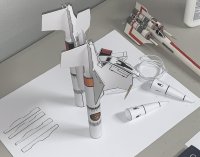 You have got to tell us where you got the Viper, or did you design it?
How well does it fly? What size engine?

Saluki said:
You have got to tell us where you got the Viper, or did you design it?
How well does it fly? What size engine?
Click to expand...

That is a 13mm min dia cardstock model, it can really scoot off the pad about as fast as coming out of a launch tube on the Galactica!

I recently got the 24mm Super Viper from More Rockets, and decided to try building a min dia 13mm clone from cardstock, (see thread in the mid power forum) The first trial was just from some spare paper and roughly scaled 32% from the geometry of the Super Viper. When I started to make a decal...

that one has an external shock cord rigged for horizontal recovery, shown here suspending the model balanced with a spent engine, next to a concept for an upscale Colonial Wiper

23. The wings are pretty much dry. I got started on the landing gear. 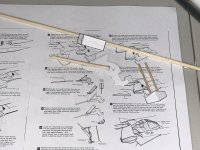 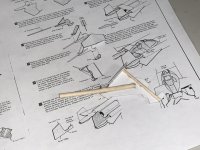 M
Getting back in the saddle...