today we had successfully launched 3 rockets for level 1 and 2. It was great. My LOC IV flew 3200 feet with a perfect recovery. Took 4 tries though due to bad igniters.
our level 2 test rocket hit 5300 feet!! Right before leaving to launch, we did one more sim for the level 2, and we noticed stability was low, so we hurried and dumped dried black beans in the nose cone, 400 grams to be exact based off of the open rocket sim data. Put the cone back on and then launched it. It was a perfect flight and the TAP member at the launched that inspected all of ours was super impressed of how we did with so little time and everything against us.
For others it was kind of a bad day. 2 rockets completely exploded off the line and parts went every where. one rocket had NO deployment and fell at ballistic speeds.

I did not get a good video because of such bad ignitors, mine went off 5 seconds after the countdown when no one expected it too. My sister has a good video, so i will get it later. Shows the chute opening and all.
so, we are level 2 now and ready to move forward.
thanks for the tremondous amounts of help and even though it seemed impossible to get to this point due to so much constraints, we made it. Now time for the level 3 12,000 foot rocket. But luckily the committee agreed with me to let us use a kit and focus completely on the ADS. 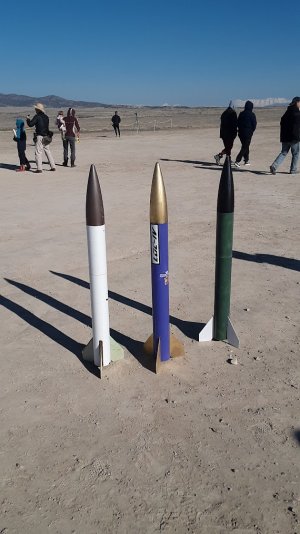 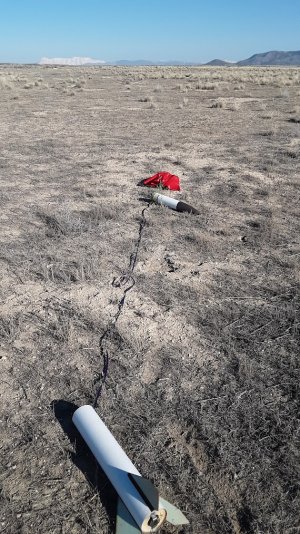 here is a video. i accidentally cussed in front of the kids, but i apologized

Congratulations on the cert accomplishments

you make it look so easy
L

It is, but its not.. if that makes sense haha.
Building the rocket was easy, up until the shock cord and parachute. The instructions were kind of odd. But the forums straightened it out pretty quickly.

The written exam is not too bad, we got a 100% on it so we are happy with that.
What made this difficult, open rocket gave 11 seconds for ejection charge, and we only had the tools for 2 second increments. We were going to go with 10, but the mentor on site suggested 12 seconds. it worked so i am happy with that. It did feel a little late, but it was hard to see
no wind so rockets were going straight up and straight down.
L

video is now attached to the OP

L
Need some help with design ideas and or kits
2