The neighbor boy came over this evening and showed me some rockets that's his mother's friend had given him. All low power of the Estes variety. One caught my eye, something I'd never seen before. It had an Estes parachute, but there are no Estes decals on the rocket. Anyone recognize this? I'm thinking it would be cool to get this working again, if I can even find film for it. Anyone know what this may be worth, if anything? Or how it operates?

Looks like the version released at the end of the film age. The original (1979) had yellow and black decals 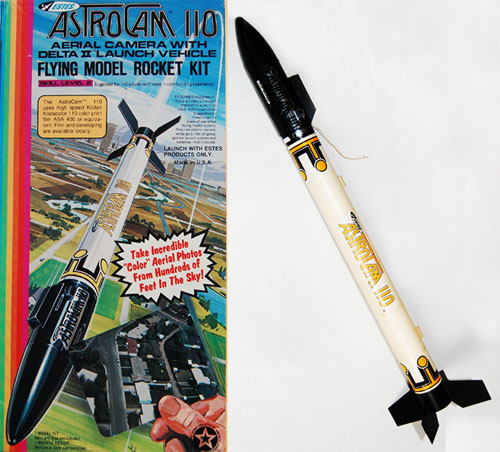 I had one of these when I was young. It is probably still in the tree that ate it on its third or fourth flight.

I don't know if they still make 110 film. You might have to try Ebay. But even if you could find some, where would you get it developed?
K

I've bought 110 film from these guys before on Amazon. Haven't tried their developing yet, though.

I got a few pics off one but they aren't the greatest. Still have it and another in the package. Kurt
R

I used to have the CameraRoc, Had to cut round pieces of film for it, as a kid had a darkroom
Bill
T

PhlAsh said:
Looks like the version released at the end of the film age.
Click to expand...

Yes, this is the 4th and last of the so-named Astrocam rockets, an E2X build and shown in the Estes catalogs of 2005 to 2007. The shutter was triggered off a pin device when the nose cone and body tube separated, instead of the shutter cord mechanism of the earlier versions. Though also sold with blue decals on a black body tube, this one is the far more common black decals on blue body tube. The Snapshot, with effectively identical camera unit, ran one more year to 2008, thus ending the 110 film rocket camera era.

Not worth a lot to collectors, particularly built, as many many thousands were made and sold. But still an important piece of the history of model rocket photography and well worth saving.

a specialty camera store may still develop it. My Dad still loves to shoot in 35mm but getting it developed got really expensive. I never got great pics out of mine either. I saw a mod once where they flipped the NC and put a standard NC on top. They claimed to get more consistent pics. Have no idea what the source was it was years ago. you might be able to gut the inside and put one of the new smaller cameras in it's place thus avoiding the issue with film
You must log in or register to reply here.
Share:
Facebook Twitter Reddit Pinterest Tumblr WhatsApp Email Link