After coming back to rocketry in 2009, using my son as an excuse for me to indulge my own yens, I tried to get back to RC planes a few years later...it never really 'took'. Part of that was I was too scared to fly anything other than my foam trainer, despite having tracked down and assembled 2 CLASSIC Carl Goldberg planes, a Senior Falcon trainer and a 56 Falcon; both were Great Planes ARF versions that had been discontinued a few years by then. Both have OS engines (.61 and .42, I believe), Hitec and/or good import servos, and most important of all, the Sr. Falcon was flown twice by an expert flyer (less than 10 minutes in the air....ever), and the Skylark has never been flown at all. I'll get some actual photos up soon, but stock photos below.

If you're in IL or WI, don't let me stop you from making offers, but that's not really the purpose of this thread. Mostly, I'm wondering what their value might be, and where ae some good, Midwestern RC websites where I can find them loving homes with owners who know how rare & cool it is to have these planes in such utterly pristine shape...nary a nick in any Monokote. I also have an unbuilt giant-scale kit, a NIB Syssa gasoline engine & some radio stuff...but it's the Goldbergs that need to find homes...and free up valuable closet space!

Is $200-250 unreasonable and/or unrealistic for each plane (more for the falcon)? God knows that's less than 1/2 of what I paid for kits, motors & parts! 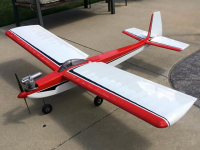 Being that nitro fuel is $50 gallon with massive shipping fees, it's only domain is 1/8 scale car racing. Will be tough to sell. Might be easier parted out, ,maybe.

Everything else is electric or gasoline.
V

Glow planes are still popular although it's a smaller crowd now. I'd list them on RCU, RCGroups and Flyingiants, local pickup only if you'd rather not ship. You can check out their classifieds to see what similar planes have sold for

Good luck. I tried to sell off/give away my fleet of RC planes 2 years ago when glo fuel wasn't quite so expensive. Of the 3 fields we have in our area, 2 are Electric only.......and the flyers at the glo OK field simply didn't want anything....even for free!

Seems like non-electric and non-drone flyers are dying off and not getting replaced.

There's a swap meet coming up in Toledo in less than a month. I'd double your asking price. Those are both highly desirable and you shouldn't have any problem selling them.

MidOH said:
Being that nitro fuel is $50 gallon with massive shipping fees, it's only domain is 1/8 scale car racing. Will be tough to sell. Might be easier parted out, ,maybe.

Everything else is electric or gasoline.
Click to expand...

Glow fuel is available in our local hobby shops is about $28 a gallon for 10% nitro.

Glow powered RC aircraft are less active, but certainly not dead in most places.

I forgot the link to the swap meet.

Classified ads stating "local pickup only/will not ship" on RC Groups ( RC Universe is still around, but less active of late)
Ads on Craigs list. More and more popular. I sell this way once in a while, but never meet at my home. Usually meet in a local shopping center parking lot for the exchange.
You can do "local pickup only/will not ship" sales on Ebay.
RC swap meets, if there are any near you.
Notices in local RC club newsletters, if there are any clubs near you.

For things that are shippable for a semi reasonable cost, RC Groups, Ebay and RC universe, in about that order.

thanks so much, all!
I'd think n hope converting then to electric would be possible, fun and relatively cheap, actually (hobbyking). The idea of doing that is why I've hung on so long...but its time to let them finally fly!