Nothing fancy, a PML AMRAAM 4 which will be modified for dual deploy. I know DD isn't required for L2 but our HPR fields here in Georgia (USA) can be a bit small, especially if there is a breeze, so it's actually necessary for this model. All standard HPR construction.

Major parts are laid out below. I've already put together some of the sub-assemblies. There's a 54mm MMT with the PML Kwik-Switch adapters. The MMT U-bolt I added as an afterthought, just in case I have to replace the nylon strap some day. I should have just done that in the first place.

There's a PML piston, which I will move to the front of the rocket vs the rear. And two av-bays. ??

At first I couldn't decide where to put the av-bay. I decided just behind the 11" coupler which joins the BT sections and also helps support and secure the forward canards. This would work though I would have to cut the aft tube, but I would also not have a lot of room aft for shock cord. I would like 20-25', but only had room for about 10'. I thought I could get a little more maybe by stuffing some down into the MMT.

So I built that av-bay using a 7" coupler and the usual parts and it came out great. As I was test-fitting it to the airframe I realized I could actually put my whole arm down the forward BT, which meant I really didn't need a fully removeable av-bay. So now I'm just going to use the glued-in 11" coupler as the av-bay. I'll be able to prep the bulkheads and innards outside the rocket and then just assemble everything normally before flight. What's great is now I have plenty of room aft for shock cord and even some nomex sleeves if I want, plus the CG is moved forward somewhat. That 7" av-bay I'll just use for some future project. Something without canards in the middle.

So anyway. I will have the av-bay in the middle, more or less, popping the aft BT off at apogee, shear pins of course, the rocket will tumble, and then at a comfortable mains altitude it will pop the forward charge which will push the piston which will pop the nose and the chute and about 24' total shock cord from the front. I'll put a screamer on it also just in case it goes down in one of the cotton fields. I lost my favorite MPR scratch-built plus a video camera in one of those cotton fields. It's mulch now r.i.p.

Last year I built a LOC Shadowhawk and modified it for DD. I've flown it several times with 100% success on G and H motors so I'm pretty comfortable with DD at this point. I'll probably use a single ALT with dual 9v batteries, dual non-pyro e-matches, and single charges. With a 4x10" av-bay I can do a lot with this rocket. We'll see what the future holds.

Motor will be your typical J350. I have to adjust Rocksim for actuals on all the add-ons but altitude should be around 3500' or less depending on how much shock cord I can stuff in. L2 attempt will be in late fall, or spring, or whenever launch schedules, kid schedules, wife schedules, scout schedules, sailing schedules, work schedules, and most of all weather all align. I might even get to paint it.

Enough yammering. There won't be a lot of pictures here but there will be some. I have benefitted a lot from those threads (over years) that explain and show how certain mods or custom built things are done (like av-bays). So I'll be focusing mainly on that kind of thing. 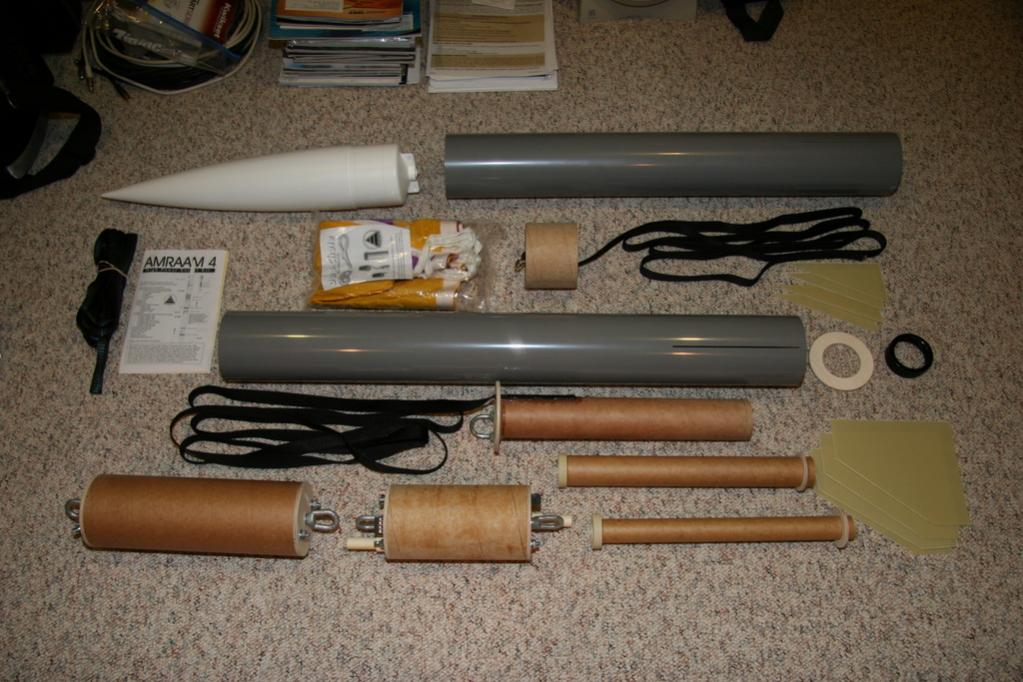 I'm partial to this model as well. It bears similarilty and heritage to the very live AIM-7 missiles I loaded onto many F4 aircraft my first few years in the Air Force.

That was awhile ago.

The 11" e-bay idea is certainly an attractive one, but I may want to discourage it. I don't like the idea of reaching down into a body tube while live charges are hooked up to an altimeter. YMMV, just a red flag I picked up while reading that. Having a separate altimeter bay that detatches allows me to have open air around the charges and the ability to test the continuity of the matches before putting it all together

Not to worry. Nothing gets connected to electronics until the sled and rear bulkhead get assembled from the other end.
You must log in or register to reply here.

Rebuilding a 4" cardboard DX3. What would you do?