Here's something interesting from HK, a ME-163 R/C plane with an 18mm motor mount. They're suggesting a C6-0, I suppose the idea is to use an extra channel to airstart it at some point in flight... don't know if that's NAR kosher.

Airstarting is ok, if you stick to the nar requirements if at an nar launch for min altitude before air start

Instruction manual says:
To prevent damage to the model, use only &#8216;capped&#8217; type &#8216;single stage&#8217; rocket engines. , hobbyking was suggesting plugging the motor to "cap it", ie not just a -0 as is to avoid ejecting the motor after burnout, and that is a motor modification according to NAR. In my opinion, the C-6 in a model of this weight is just a neat effect and isn't really doing anything for speed or altitude...ie a gimmick.

You could use an 18mm RC motor, like the D-2.3 which has an 8 second burn and would look nice as an effect. or a single use 18mm composite with ejection charge removed which is not a modification.

Air-starts. During stable, gliding flight of the R/C RBG, an attached motor may be air-started to increase the model&#8217;s altitude or airspeed without diving. This is permitted if:
The onboard R/C ignition system is designed to not to be triggered accidentally, possesses an arm/disarm system, and is not armed until the model is on the pad with the radio system turned on and verified.
The proposed airstart was reviewed and approved by the Range Safety Officer (if present) prior to launch.
The model heading is not toward spectators.
The model is at least 100 feet above the launch site.
The pilot gives a loud countdown for the air-start.
If the model descends below the minimum altitude for air-starts or the air-start fails, the model will be landed in a safe area, clear of people, and only the pilot or pilot&#8217;s appointed helper will be allowed to approach the model until the ignition system has been disarmed.
Last edited: Mar 15, 2017

Absolutely cool. Even comes in an unpainted version! For those of us who want to get our JG 300 markings "just right".

I have seen a 1/5th scale (big) Komet that had a D rocket motor with onboard ignition. But this was not meant for flight; it had an glow/gas engine up front, and the rocket motor was for smoke & effect on take-off.

My impression is that this is the case as well (i.e., the rocket motor is for looks on take-off).

I posted on the rcgroups thread, I'd like to see someone try 18mm composite D motors, sirrius has a plugged D-10 which would be more interesting, but they'd have to switch to a 12v e-switch setup to ignite it. Right now everyone over there is digging their ejection charges out and capping with epoxy, which people over here would freak out about as a motor modification. The 18mm composites don't need a modification, just remove paper cap and pour out bp.

It's interesting, the aerotech retail price on D-10P motors is $5.30 which isn't bad. I think this would be a great motor for some actual boost, or use the D-2.3 for an extended smoke trail and 8 second burn.

I've also asked the AMA for clarification on their rules when flying at an AMA site, which say

Rocket motors (using solid propellant) up to a G-series size may be used provided they remain attached to the model during flight. Model rockets may
be flown in accordance with the National Model Rocketry Safety Code but may not be launched from model aircraft.

This is sort of like the second amendment, it does not say that an RC plane with rocket assist is a model rocket and must follow NAR safety code. They are two distinct sentances.

Which means, can you modify a motor by removing the ejection charge and still be ok under AMA but not NAR rules? One district rep said no, the other said they were not sure.

If you do have to follow NAR safety rules for rocket powered rc planes when flying at an AMA field, then horizontal ground starts are NOT ok, you can only do air starts above 100' and you have to launch within 45 degrees of vertical for pure rocket takeoff. I specifically mentioned this model because a lot of people are plugging motors and flying them at ama sites.

I know many people have their interpretations and beliefs, but I wanted AMA to give a direct clarification.

Of course if you are flying at your own site you aren't bound by this.

Just looking at the Durafly Me-163, I am wondering if the initial thought for the motor was to use the ejection charge to "pop out" the rocket motor.

There does not appear to be an engine hook.

No, it's just a foam pocket, instructions say to use a plugged motor and the videos talk about epoxy plugging a c6.

At an AMA field, AMA rules apply. NAR rules do not apply because it's not an NAR activity. It's a model plane, with a rocket motor, not a model rocket with wings.

The problem would be with an NAR launch, wanting to do a horizontal takeoff. But I COULD see that happening, if the landowner allowed R/C planes to fly and it was flown as a Model Plane with a rocket motor. RSO could say no, not on "MY" range, but then if the landowner was OK with it, then it could take off somewhere other than the official rocket range (RSO does not "own" the land!), like any other R/C plane the landowner allowed to fly. Have to admit the chances are small that such an occasion would come up, but theoretically it's there.

An R/C Modeler article in the early 1990's showed an ME-163 that was powered by an HPR motor. Perhaps J power.

It took off horizontally, from grass. Very notable to me, because it used a balloon with water in the nose, to give it noseweight to counteract the tailweight of the propellant. When it started rolling, the end of a tube attached ot the ballon was unplugged, allowing water ot be squeezed out. And I used that idea for my X-1 and Orbital SkyDart booster to keep the CG from changing drastically, though I made mine gravity-fed with hollow tanks rather than a balloon.

Also many years before that, articles.photos of R/C planes using "Rato", a rocket motor to assist take-off. One was simply like a 40" high-wing Cessna, with the engine under the fuselage and a bit behind the CG, at abut a 30 degree down angle so the thrust would not affect the pitch moment too badly and a vector of upwards thrust (it was often fired during the middle of takeoff run and was something like a C6 or D12).

What the AMA code specifically bans rocketwise is firing "Missiles". And some jack.....persons have done that thru the years, 13mm missiles launched horizontally from R/C planes, to hit the ground. More importantly I think that is FAA illegal.

Back to the Durafly model, they came out with this two years ago, in greenish camouflage. So it seems the new red one is a different color and some improvement to the wheeled drop-off dolly system. Here's a video:

As for modifying motors to get rid of ejection charge...... none to remove in C6-0's. But there is a little bit of a forward fireball/pressurization even from a booster motor, which could cause it to pop out. I'm not sure that small vents would be a good idea on this.

I have heard of some people who fly R/C RG's who are very sloppy with their mixing of 5-minute epoxy at times. Epoxy accidentally dripping into the forward end of booster motors..... which has the effect of plugging them, useless for staging. What to do with such booster motors when such epoxy mixing accidents occur?
Last edited: Mar 20, 2017

burkefj said:
No, it's just a foam pocket, instructions say to use a plugged motor and the videos talk about epoxy plugging a c6.
Click to expand...

Yeah, "ejection charge" and "foam" are not words that go together very well..... :eyeroll:

I converted the original HK Me-163 to 18mm rocket assist, before they ever offered the second version with the rocket motor mount.

A C6 actually gave a nice added boost after a flyby at half throttle, a pull up to about 45 degrees and an air ignition. More than an effect, less than a typical R/C rocket glider.

I bought some D10s to try at some point.

FWLIW: I came across an online vid a few years ago of an R/C Bell X-1 that was air-launched {or air-dropped} from an R/C B-29 bomber. The X-1 carried a rocket engine that was air-started. Whether this engine was a "-0", "capped", or was a composite engine, I do not remember.

From what I remember, the rocket engine was the only propulsion the X-1 carried. That is, it had no propeller & electric motor.

FWLIW: I came across an online vid a few years ago of an R/C Bell X-1 that was air-launched {or air-dropped} from an R/C B-29 bomber.
Click to expand...

I saw the same vid. Seriously . Both were piloted back to the ground by separate pilots.

RocKiteman said:
From what I remember, the rocket engine was the only propulsion the X-1 carried. That is, it had no propeller & electric motor.
Click to expand...

EDIT: I'm an idiot, and failed to note that the conversation shifted to the Bell X-1. My apologies...

As a point of interest, the X-1 flight team did launch the aircraft under rocket power from the ground late in the program, just to prove it could be done. This was a significant departure from the previous practice of dropping it from a B-29 carrier aircraft. Legend has it that this effort took place as the result of a challenge from Navy personnel working on the Douglas D-558-1, which was just barely capable of supersonic flight following a ground takeoff.
____________________
Original post:

That is correct, the Me 163 boosted horizontally from the ground under rocket power, and became a glider once the fuel supply was exhausted. Here's a short film on the Komet I did several years ago:

OverTheTop said:
I saw the same vid. Seriously . Both were piloted back to the ground by separate pilots.
Click to expand...

1/10 scale, G12 reload power. Used a water ballast tank in the nose to keep the CG correct due to the loss of the burning propellant mass in the tail. I learned that trick from an article about an R/C ME-163 that took off from the ground, using H or I power. First pic shows the vac-formed water tank in place before the nose section was completed. 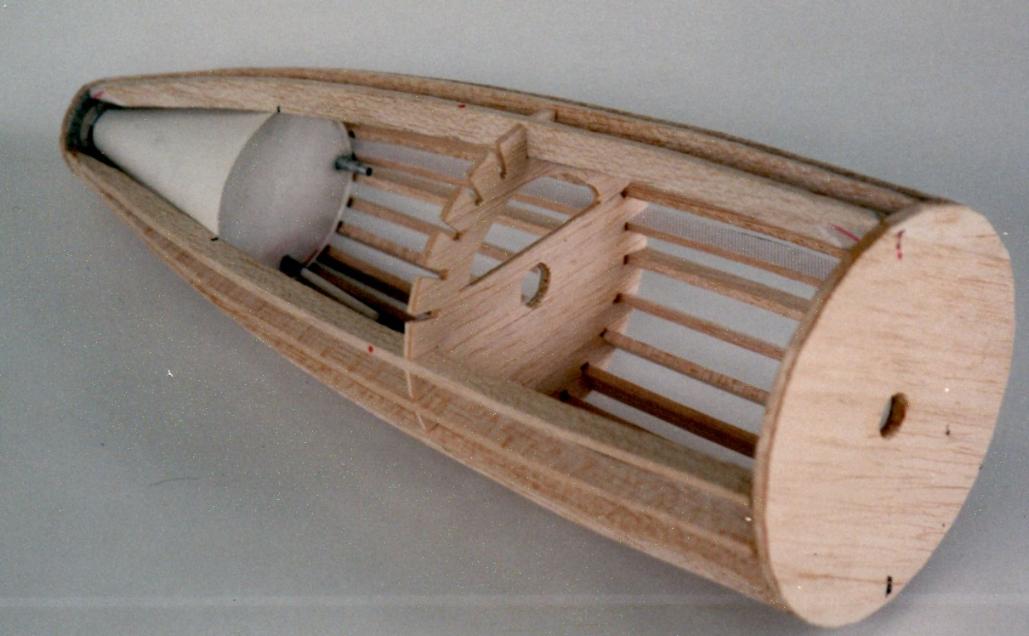 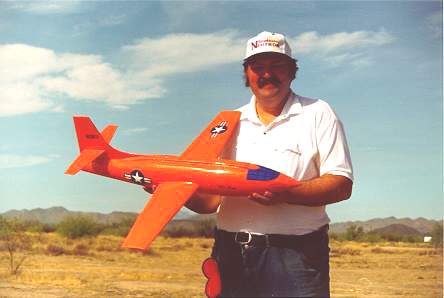 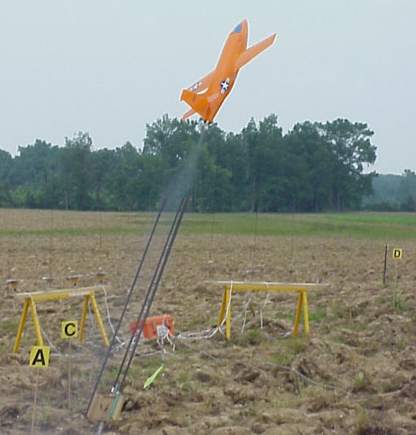 The Klima Me-163 rocket glider kit: a mini review