Ok, I realize that I did post this in another thread, but I didn't get the answers that I was seeking... So, I'll start a new one.

Here's my idea. Attaching a drogue to the top of a main parachute (perhaps with a dedicated shroud line going to it), then reef the main so that the the whole bundle is unrolled, and ready to deploy when the JLCR releases. Would this work? Why, or why not?

I realize that there would have to be something done to make ensure that the JLCR isn't lost when it releases. Perhaps a tether attaching it to the attachment point with the drogue.

The answers so far have been:


rharshberger said:
Appearances are that it would work, the issue is whether the band on the JLCR is strong enough to keep the main reefed during the descent and keeping the JLCR in place.
Click to expand...

( If I'm understanding the pic correctly... )

Anybody else have an opinion? John?

Another idea would be to have the main vented, much like you'd do to an Estes chute, to prevent the drogue from collapsing on the main after the JLCR deployment.

I have done something very similar with a cone shaped pilot chute and it worked great!!! Also the return was much more stable than the typical tumble fall. It lined everything up nice and easy, so the chute deployed quicker when the JLCR did its thing.

From the feedback I'm getting on FB, it looks favorable.

The issue that prompted this was seeing images of damaged rockets, ones that were damaged by the nosecone striking the fin can. I'd hate to have a Cert flight fail due to a stupid accident like that. If this idea was implemented, and since everything is hung from a single point (with the lines are already extended), there would be no chance for the two chutes from drifting together, unless the fin can is so draggy that it is keeping pace with the parachute.

I like this idea a lot. But how necessary is the drogue in this case? Wouldn't the reefed chute act like a streamer/drogue-thing, slowing the decent until the main deploys? That's the basic concept for MPR with a JLCR, and it works great. I'm thinking about using a JLCR for my L2 flight to keep it simple, so thanks for starting this thread, K'Tesh, but I first need to need to practice packing a 36" chute with the JLCR.

BDB said:
I like this idea a lot. But how necessary is the drogue in this case? Wouldn't the reefed chute act like a streamer/drogue-thing, slowing the decent until the main deploys? That's the basic concept for MPR with a JLCR, and it works great. I'm thinking about using a JLCR for my L2 flight to keep it simple, so thanks for starting this thread, K'Tesh, but I first need to need to practice packing a 36" chute with the JLCR.
Click to expand...

My imagination has most people using the JLCR holding the parachute in a bundle, not reefed like my diagram. If the chute is just reefed (like my image) then I guess a drogue wouldn't be needed, as it would likely, like you said, act like a streamer. (3 forms of the word "like" in rapid succession... Can you tell, I'm, like, from the west coast?)

I have used my JLCR to reef the main chute on my Bullet Bill (Cowabunga) with a 30" elliptical chute to act as a 'streamer', then open like normal, like your first picture, but without the drogue. I basically fold my chutes like shown in the Fruity Chutes video, but in this case I put the JLCR around the base of the parachute where the shroud lines connect to the canopy BEFORE doing the Z fold and rolling the bundle. This puts the JLCR at the center of the bundle, and held in by the roll of the shroud lines.

Important note: Put the JLCR INSIDE the fold/roll. If you put it on the outside, you'll risk getting the rolled shroud lines trapped under the JLCR and it won't unroll. Ask me how I know

The now folded and reefed chute goes into the burrito like normal. Upon ejection, the slip stream unrolls the shrouds from the canopy like normal, and also makes the canopy flap like a streamer, with the JLCR keeping the canopy opening from getting enough air to inflate.

2 things that I had to figure out to make it work:

1. Wrap the JLCR around the base of the parachute TIGHT. I bought a bag of rubber bands and found several sized that worked. Pain in the @22 to get it stretched out and wrapped around, but it works. I went through several rubber bands to find the right one, kept not getting it tight enough and it would only act like a reefing ring.

2. Lanyard length on the JLCR. I initially wrapped it around a shroud line, but invariably it got tangled up when it released and did some strange things to the canopy performance. Eventually I made a long loop of 100lb Kevlar and now I attach it to the same swivel at the base of the parachute. When the clip releases, the 'pop' of the parachute flings the JLCR clear of the inflating canopy and shroud lines = no tangles.

The only real thing to be aware of is that the chute will inflate with authority! Make sure that your rig can handle it.
Last edited: Sep 29, 2016

Only thing I would caution is the rubber band would need to be able to hold the package closed. I used a drogue at main chute apex with an Archtype rockety cutter. I used a piece of hard foam at the base of the loop at the top of the main to allow
the ziptie to positively occlude the main from prematurely deploying out of the nomex reefed package. I take no credit for the idea as another fellow posted this. I looked up the link a couple of months ago and the pictures he posted are gone from the post.
I can take a picture of my chute and post it here if desired. The concept can be workable but the risk is the drogue pulls the main out of the package too early if it works the main free from the rubberband restraint. Kurt
Last edited: Sep 29, 2016

Copying what I wrote about this same topic on the NAR Facebook page:

For various models I sometimes use a semi-drogue parachute method. It would work well for this too. Drogue chute attached to nose section (with a short shock cord). Main shock cord goes from nose section to main body, and main chute is about 2/3 to 3/4 up for the main body. Main Chute is packed so it is a LOOSE slide fit inside of the main body tube. The drogue chute on the nose is the LAST thing that goes into the main tube, and it is packed so tightly so that if the nose comes off at all, it will bring the drogue chute out with it.

So, if the main chute is not ejected out of the main body, the drogue chute on the nose section (if it gets out and deploys), will pull the main chute out. I have been using this method on various models since 1980 and it has worked great over the years. Attached is a one-page article from a newsletter from long ago, and then a photo of a model.

In the case of the Jolly Logic Chute release, Id set it up the same way regarding drogue and main chute locations on the shock cords. Have the Chute Release set up for the main. I would make sure however that the main shock cord could not in any way pull on the chute release tether in such as way that the main shock cord might be able to yank the chute away from the chute release. So, there should be some slack in the TETHER line, to prevent that from happening (Stock tether line is not very long, so may need to be extended) 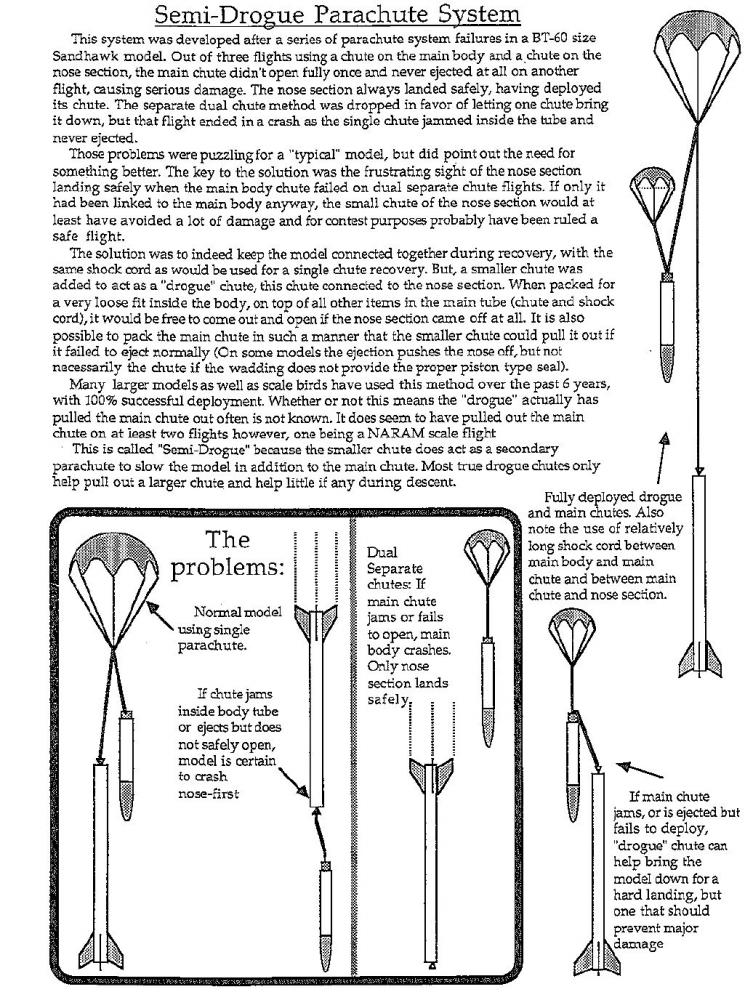 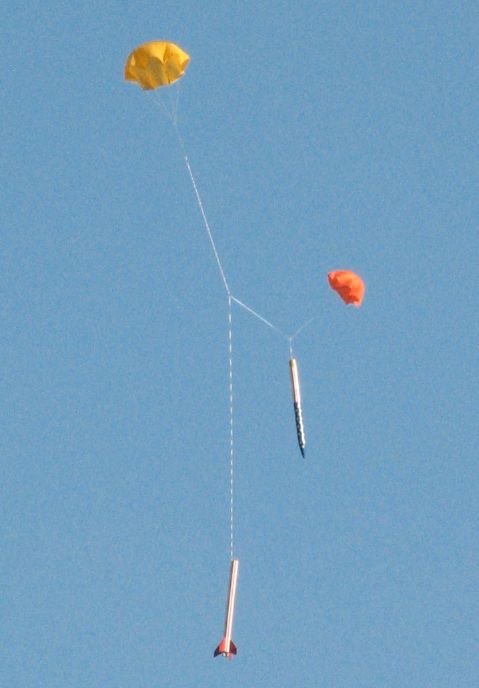 On a related matter, we designed our Guide Chute product so that it only has four shroud lines that aren't too long. It really helps to prevent tangling, and the conical shape pretty much bounces off the main chute if there happens to be a collision.