Flight Systems, Inc. (FSI) was possibly the least-heralded major player in the hobby during model rocketry's Classic (or Golden) era. The company produced kits and its iconic black powder mid-power motors for 27 years (1967-1994), and they were in business for many times longer than any number of better known companies such as Enerjet. Yet you can search high and low throughout TRF and find nary a peep about them. The company survived and thrived for almost three decades, which included some of the most fiercely competitive years that the hobby has seen, so they were obviously successful. Yet you can lurk on this and other forums and you'll never run across a true, diehard fan of the company and its products.

I never knew about FSI during its heyday. I didn't discover it until after I became a BAR, ten years after the company closed its doors. And I'll admit right up front here that I have still as yet never laid eyes or hands on any of their products, save several unassembled parachute kits that were sent to me by a very kind person after he found out about my obsession. I learned about them with the help of Ninfinger, Ye Olde Rocketry Plans (YORP), the oldrockets group on Yahoo and some conversations on Ye Olde Rocketry Forum (YORF). FSI certainly didn't have anything close to the biggest catalog of kits, but they did produce a bunch, and I was immediately drawn to them when I first saw them on the pages of their catalogs at Ninfinger. In 2007 I set myself the goal of cloning every one of the 30 kits that they produced, and I have been at it ever since.

The Hercules (kit #1020) premiered in 1987, during FSI's 20th year of operation. It was arguably the brawniest kit that they produced, and one of their larger ones in terms of length. It had a 28mm motor mount, but I built my clone to fly on a 3 x 24mm cluster. It had a glorious maiden flight last year, but then met its demise on its second, due to a freak accident. Here are some pictures of it before the accident. The paint job was my first ever attempt at camouflage decor.

Right up until its accident, the Hercules was the star of my rocket fleet, my pride and joy.

Here are some close-ups of the paint job. I wish I had taken more and better pictures of it.

I can't say I was a fan, but I did purchase components a couple of times from them in the 80s.

They had airframe tubing with unusual diameters that appealed to me for some long forgotten scratch builds. If I recall correctly, I think they had some with thicker walls too. I probably still have some of their tubing and cones in my buried stash. Somehow, I never purchased their motors though a friend of mine loved their E-60s.

I have built numerous FSI kits including the Hercules kit which met it's demise via a F100 cato (which FSI replaced at no charge). I still have a Maveric with a Astrocam for a nose cone. I wonder where Starlight got it's insperation for it's shock cord mount
Mr. Bob
Starlight model Rockets LLC
www.starlightrocketry.com

I learned of FSI when I started out in the hobby in 1990. My stepfather bought all of the scale kits they made at that time; a Black Brant 2, Javelin, and a Nike Tomahawk, all flown on F100s, until the Black Brant came down under parachute almost fully engulfed in flames. Another guy in the club [which would become Connecticut Tripoli later that year] attempted an Estes kit with an F7. When they kept telling me it was a long-burn motor, I was expecting the splintered pieces of rocket wouldn't be the thing that burned a long time. I flew a lot of F100s [without one CATO, I might add] when they seemed, to my budget as a 14 year-old, to be far more cost-efficient than the single-use Aerotech motors.

Out of almost 100 FSI f100 and F7's I had 1 Bad F100 In my Hercules and I did a cluster 1 g80 airstarting 6 F7's and one of the F7' CATOed acting like a retro rockets turning the rocket arc 80 degrees. Messed up the rocket but was interesting. Yes I would love to get my hands on more! Silver Streaks are also fun.
Mr. Bob
Starlight Model Rockets LLC
www.starlightrocketry.com
C

You probably do not realize it but you basicly have a Megaforce Dune buggy rocket. Just put 3 F100's in it instead of 24mm motors.
B

bob jablonski said:
I have built numerous FSI kits including the Hercules kit which met it's demise via a F100 cato
Click to expand...

One of my coworkers bought an FSI kit along with a couple of packs of motors. He got a few good flights, then had an ejection charge failure. We cut off the few inches of crumpled body tube and launched again. It got a few feet up in the air and cato'd into little fragments. He decided not to pay money for another kit and trust it to those same motors so he gave the 2 or 3 leftovers to me. I wanted to fly them but didn't want to trust them too much either. I found a 2" diameter cardboard tube out of a roll of paper, or maybe it was a mailing tube. I rolled a motor mount tube out of paper, make fins out of poster board, and even rolled a cone-shaped paper nose cone. I.E. I built a rocket for no money at all. We launched it using the remaining motors and got successful launches and recoveries, and I still have the rocket.

I ordered a batch of parts from Semroc earlier in the week. One of the kits I planned to clone out of the horde is the Hercules. (The other is the Intrepid.) I'm planning to do a camo paint job, but since I'm now flying out of a cornfield, I'm a little leery about going with the traditional earth colors. I think I may go full day-glo, just to make finding it a bit easier. Whatever the case, I hope to have my own Hercules to add here in the coming weeks.

carbons4 said:
You probably do not realize it but you basicly have a Megaforce Dune buggy rocket. Just put 3 F100's in it instead of 24mm motors.
Click to expand...

Oh, I knew that I was altering the motor configuration when I built it. I'll try to get it repaired this year, and then it will be Q2G2s only for the cluster ignition from now on.

I'm not sure that three F100s would fit; the three 24mm tubes just fit with no room to spare. Three 24mm motor tubes fit into the LT-225 for the Herc like three BT-20s fit into the tube for the Estes Ranger. And it's highly unlikely that I would even be able to find three F100s these days anyway.

Fishhead said:
I ordered a batch of parts from Semroc earlier in the week. One of the kits I planned to clone out of the horde is the Hercules. (The other is the Intrepid.) I'm planning to do a camo paint job, but since I'm now flying out of a cornfield, I'm a little leery about going with the traditional earth colors. I think I may go full day-glo, just to make finding it a bit easier. Whatever the case, I hope to have my own Hercules to add here in the coming weeks.
Click to expand...

I have had a replacement for the crashed one on the back burner for some time now. I need to get back to it. Wonderful rocket.

This gallery showcases the FSI Hercules (#1020) and those rockets derived from it. Particularly appropriate in this thread are the following:

Mfg. Description: The Hercules is a large 33 1/2" rocket used to demonstrate the high performance of F100 rocket engines. Its always a crowd pleaser as it streaks off the launch pad. The Hercules makes an excellent research vehicle capable of carrying large payloads. (FSI 1990 Catalog) 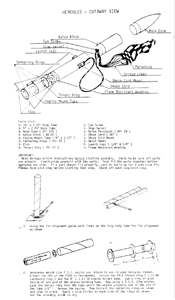 
If you have any additional information on this rocket and/or catalog photos please let us know.
Last edited: Feb 22, 2013

This is my brother in law loading his FSI Hercules at NARAM 55. Tony bought this with a bunch of other rockets in a Goodwill store years ago. It sat in his shop and was one of the rockets he dug out last year for the Skybusters regional. Having just cloned a Hercules with Semroc parts, I recognized the shape and was able to put a name to it. It's sturdy like you wouldn't believe. The flight at NARAM wound up coming in without a chute and hit the launch pad HARD. Not a scratch on it.
You must log in or register to reply here.
Share:
Facebook Twitter Reddit Pinterest Tumblr WhatsApp Email Link