Free Body Diagram for a Rocket

But I was bored today and was trying to do the free body diagram for the rocket. And I just can't get the same equation. It's driving me crazy. I can't figure out where I went wrong. Anyway, here's my work.

If anyone can point me in the right direction, it'd be much appreciated!

It is hard to describe in words, but I'll try. This is usually done in a Fluid Mechanics class with a Control Volume analysis. You have put the C.V. around the entire outside of the rocket going around the front, the aft end, the outside of the nozzle, and finally crossing the plane of the nozzle exit. The flow going throught the nozzle exit plane gives the momentum thrust term mdot x exhaust velocity. All the ambient pressure forces resulting from the pressure acting on the normal surface area vector cancel, except for the ambient pressure acting on a projected area that turns out to be the same as the area of the nozzle exit plane. This contribution is in a direction opposite to the momentum thrust. There still remains one pressure term to examine and that is the part of the C.V. that coincides with the nozzle exit plane. There the exhaust pressure acts on this exit plane area and has a sign opposite to the previous pressure evaluated term. It is a confusing derivation and I think most Fluid Mechanics books that I had in college do not handle it well. I remember the diagram in George P. Sutton's "Rocket Propulsion Elements". It confused me for the longest time, but after many years it came to make sense.

I don't know why but the link broke in my first post. This was my work. I think I'm doing what you're saying for the most part. There's definitely some detail that is making it wrong though.

Also, I totally agree. I've looked through 3 different textbooks from college and none of them seem to handle it very well. That's what's really been bugging me because I can't get it even with the textbook at hand, and it seems like it should be pretty simple.
Last edited: Feb 6, 2010
R

phil303 said:
I don't know why but the link broke in my first post. This was my work.
Click to expand...

The link is not broken, but your image host blocks any referrer except the Something Awful Forums. Here is your picture. 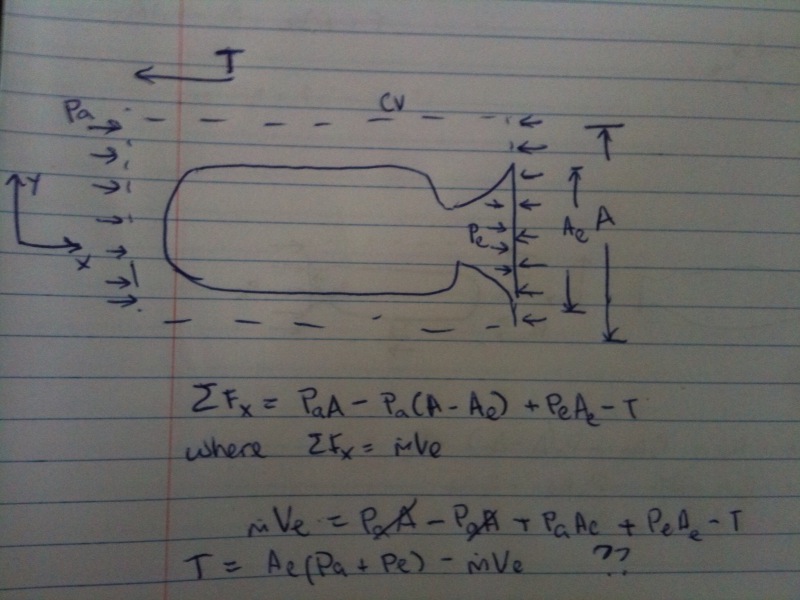 Thanks for printing the picture! I could not access it.

I should maybe try to draw my own picture, but I would not be able to draw it and make a copy until next week.

The basic problem in the diagram is that the ambient pressure is shown acting only on the front end. In contrast all the outiside motor surfaces are part of the C.V. not just the forward end. (Think of this C.V. as a magical siran wrap that goes all around the motor's outside including the nozzle exit plane, The magical siran wrap is completely porous to nozzle exhaust gases, yet somehow registers the force from the integrated exhaust pressure acting on the exit plane.) Also, the exhaust pressure only acts on only one side. Recall that the forces from pressure are found by multiplying the pressure by the unit normal vector times the associated increment of area. All the forces from pressure exerting on the cylindrical faces cancel. The (axial) force from the ambient pressure acting on the converging nozzle cancels with the same projected area on the head-end. However, this force gets added back in on the diverging nozzle, because the projected area is in the opposite direction, i.e., the surface normal vector has an axial component in the opposite direction compared to the nozzle converging section. When you carry out this operation carefully, you will get the correct answer.

Ah yea, I apologize for that. I didn't realize that only allowed referrers from the SA forums. Good to know tho.

Ok I kind of understand what you're getting at there. I'm still kind of confused so I uploaded a few pics from a book I had.

You're saying look at it more like what's shown in my Elements of Propulsion book, which I have attached.

What I don't understand is why wouldn't it work the way I did it. And let me just reload a new picture that I have because I did have the axial ambient pressure on both sides of the CV, it just wasn't clearly shown. Here I have the ambient pressure acting on the area of the entire side of the CV being canceled out. Leaving the term P_a*A_e pushing to the right side (shouldn't it be to the left?) while the exhaust pressure also pushes to the right side with the term P_e*A_e. What I don't understand is why does the math work out like this? I know it should be opposite but it's not coming out that way..

Bob, is there any chance I can see a copy of your work? 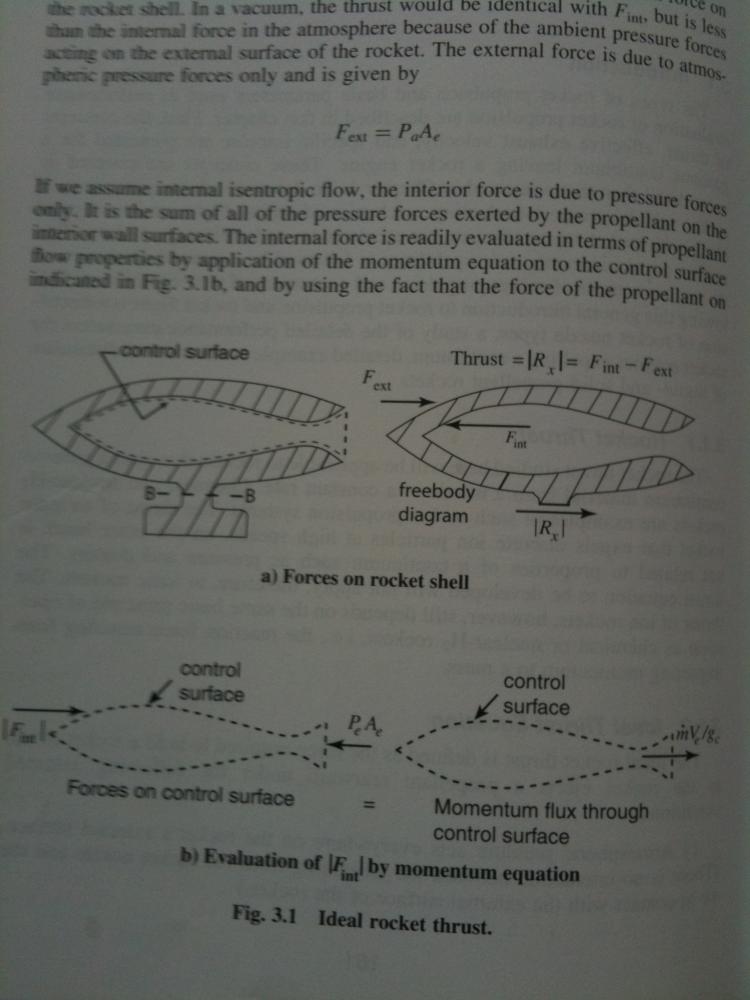 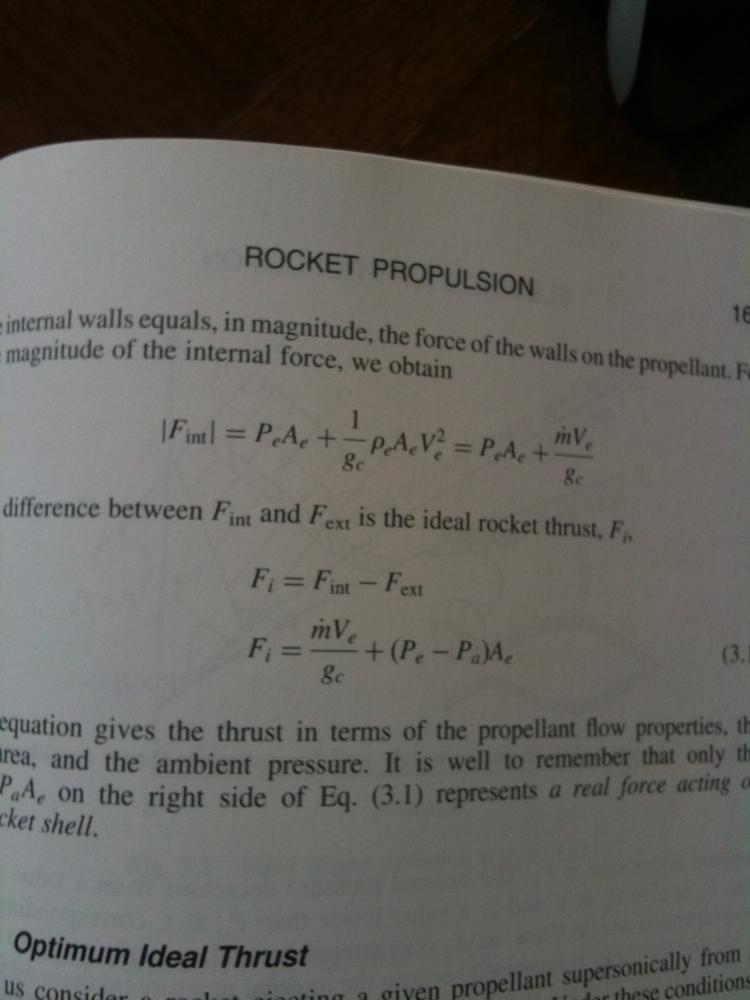 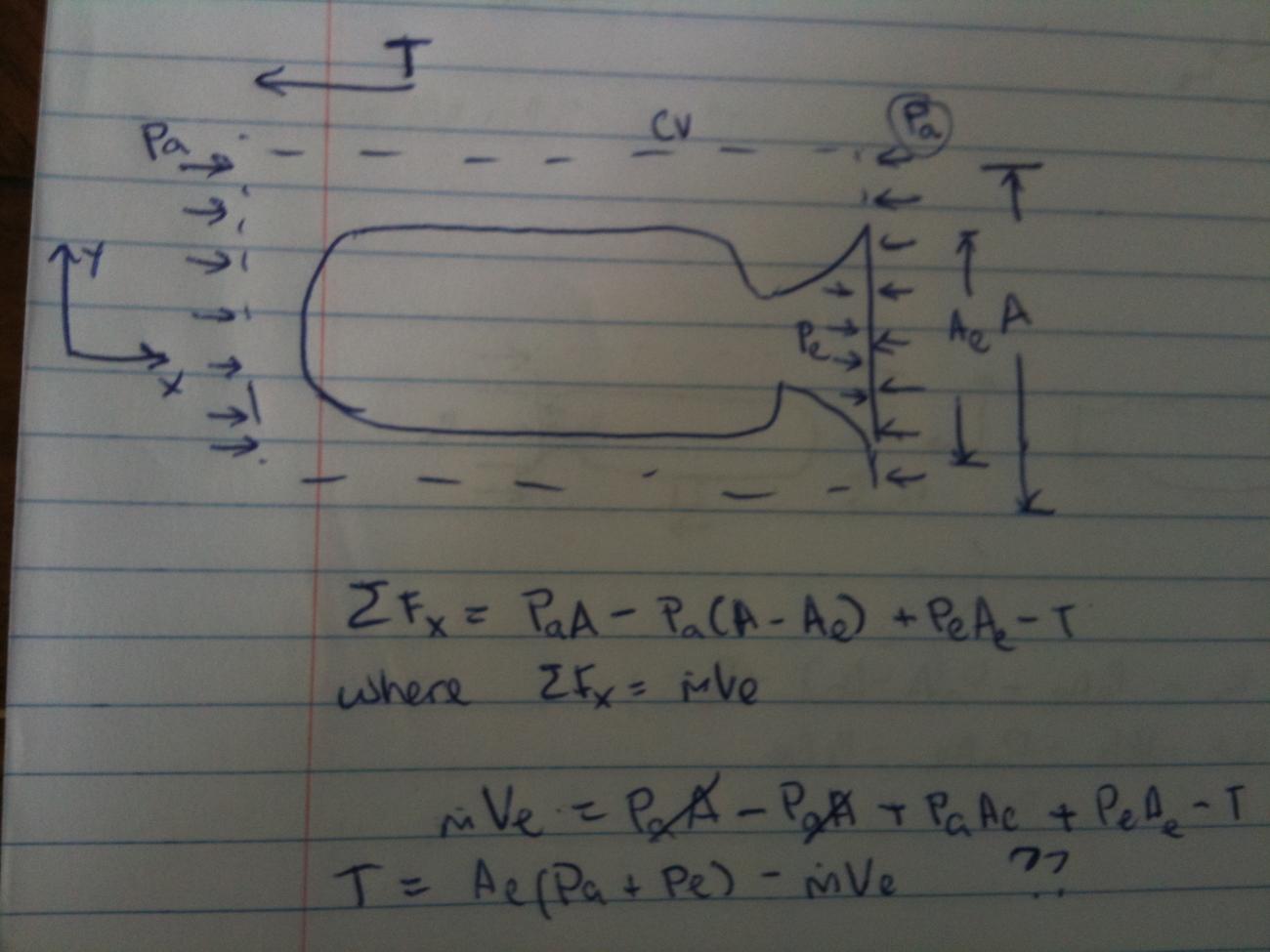 No matter how you draw the C.V. you will get the correct answer. Your C.V. will work.

The last two terms on the left hand side (LHS) of your first equation in your diagram have a sign error. The equation should be writen as follows:

Doing the algebra you will get the following:

Going back to the first equation above, this is the summation of forces acting on the C.V. is equal to the momentum flux out of the C.V. for "steady-state". The third term on the LHS is in the negative direction just like the second term. Since this is a steady-state C.V., the C.V. is not moving in our reference frame. The best way to think of this C.V. is that it is a static test for the motor. Therefore "T" is the force exerted on the motor, so it won't go anywhere and the direction of T is to the right and it is positive.

The C.V. I mentioned in my other posting looks different, but it will give you the same answer. I can actually think of a third C.V. analysis that goes around the outside of the motor and then wraps into the inside of the motor without crossing the nozzle exit plane. However, this C.V. analysis requires a detailed knowledge of the pressure inside the motor including the nozzle. I have applied this kind of analysis with a commercial CFD (Computational Fluid Dynamics) computer code to rocket motors and it works fine.

Ah ok thanks Bob. Now I understand it a bit further, at least the thrust term. I guess my final question is why does the exhaust pressure term act in the negative direction. Shouldn't it be pushing on the control volume to the right?

Looking through my books, I see that it's always to the left but I just don't understand why if the exhaust is going out of the CV.

Technically, pressure is a normal stress and it does not have any direction associated with it and until it is combined with an area normal vector. A person can go back to the surface integral form of the momentum flux equation and see how this procedure is handled. Rather than do this, I would say look at your diagram. You show arrows for the exhaust pressure, pe, on both sides of the nozzle exit plane. Actually, only the arrows on the outside of the C.V. pointing to the left should be shown. These arrows are associated with the outer normal area vector and follow the "same" convention as all your other arrows. For example, the arrows for the area (A - Ae) right next to the nozzle exit plane point to the left.

Our journey begins in earnest...
2