Picked up a pair of the Estes Fire Flash a couple years ago on clearance. I paid around $4ea. if I recall correctly. The Fire Flash is one of Estes E2X series rockets. While I like the scale like missile appearance, the materials and execution just missed the mark. The rocket really has two major issues. The first is with the pre-colored tubes. They are very thin and soft. I was very tempted to replace them all with standard Estes or Apogee tubes but decided to see what I could do with the stock stuff. After all it was $4 and some of my time so nothing lost.

The second issue is with the transition coupler. While it works fine in the upper tube as it gets glued into place, the lower section simply isn't long enough. It only extends down into the lower tube about 1/2 inch which isn't enough to keep the long upper section stable. This really needs to be at least an inch long maybe longer.

Sorry I don't have pics of the process or this would have been a Build thread and no a summary During the build I took a look at all of the molded plastic and didn't care for the dull almost faded look. The fins and transition coupler and nose cone were all shot with Duplicolor clear coat prior to assembly. This gave them some shine and made them look presentable. During the fin can/motor mount assembly I added a thrust ring and left out the motor hook. Centering rings were glued to the motor tube with Tite Bond then the fins were attached to the lower gray tube using 5 min epoxy.

The plastic center coupler was sanded and installed in the lower Gray tube using more 5 min. epoxy. The upper and lower launch lugs were aligned and set aside to dry. Before attaching the upper Black tube, I added a 200# Kevlar leader in a normal Estes tri-fold mount. This was attached about 2 inches up from the rear of the upper Black tube. I have seen Estes plastic melt away under ejection so I didn't want to mount it to centering ring per the instructions. About 7ft. of 1/8" elastic was then attached to the leader. Finally the upper Black tube was attached with more 5 min. epoxy and placed in a "L" channel for alignment while drying.

Next came the smaller upper section. The instructions tell you to add clay to the nose cone, attach the first tube then add more clay. I simply replaced the clay with 1/2oz of BB's and epoxied them into the tip of the nose cone. I did use some rough sandpaper on the inside of the nosecone for better adhesion. The nose cone was then inserted into the BT5 upper body tube. Next came the upper fins. I test fit the fins and marked their location on the tube. A small strip of the outer layer of the tube was removed where the fins attached and they were glued in place using epoxy and left to dry. The coupler was installed next. I added epoxy to the upper and lower BT5 tubes and inserted the coupler into both sections. The excess epoxy was wiped away and the tubes placed in some "L" channel for alignment and left to dry.

Finally the upper part of the elastic shock cord was attached to the top of the transition coupler. The coupler was then epoxied into the upper BT5 tubes. At this point the assembly was completed. Total time with drying was about 2hrs. Actual working time was many 45 mins.

Next came the stickers. I looked them over and liked the design. I quickly determined I could recreate them in vinyl and started that process. All of the stickers were replaced with 651 vinyl.

The rockets first flight was on a B6-4 and it flew well. I was concerned about how loose the upper section was but figured I was in the field with no one else around for a mile and it was a small motor so lets see what happens. Everything went great and I was happy. A few hours later we it was the Fire Flash's turn to go up again. This time on a C6-5. The pic below shows the rocket ready to go with the C6-5. This flight wasn't so successful. About 30ft off the pad the upper section folded over at the transition coupler. The rocket spun around for a few seconds with the chute and shock cord out then came down in some tall weeds about 30ft. from the pad. The ejection popped on an empty tube and I went to recover a minute later.

To my surprise, only the very top 1/4" of the lower BT50 tube had any damage and only three lines pulled off the chute. This tube was straightened, the rocket was repacked and set aside for repairs. Since this flight I have not gotten around to repairs. I need to figure out a way to increase the length of the lower part of the transition coupler. I'm thinking of adding some heavy wall coupler to the bottom side of the transition and soaking the whole thing in thin CA. I'll keep you posted.

For now, here is the only pic I have. Fire Flash waiting to go up on a C6-5. I'll add better pics after repairs. 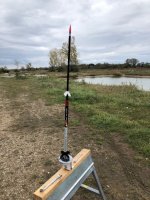