boatgeek said:
Too thick and heavy*. That's something that I always do when 3-D printing stuff. I'm trying to back off, but it's hard to break bad habits. I deliberately made the fins thicker so that they'd have a rounded leading edge that was less likely to stall, but it was probably still too much.

* 4mm ring, 6mm max fin thickness. It's got pretty light infill, but the fin can is still too heavy. Bulletproof, but too heavy.
Click to expand...

Well, the cat is less likely to knock it off the shelf......

Science got done today, and all things considered it went pretty well. The sustainer flight was straight on average though with a bunch of corkscrew. The booster took damage at staging. More data and thoughts later.
M

I can't tell if this came up already but is the sustainer classically stable? I mean, I know without fins that is supper hard to calculate but can it pass something like a swing test if oriented correctly to start?

mooffle said:
I can't tell if this came up already but is the sustainer classically stable? I mean, I know without fins that is supper hard to calculate but can it pass something like a swing test if oriented correctly to start?
Click to expand...

The sustainer is not stable on its own per OpenRocket. It has about -0.5 calibers of stability after staging. That gradually improves as the motor burns if it can hold on that long.
M

I'm honestly shocked that it's that unstable and the spin stabilizes it that much.

mooffle said:
I'm honestly shocked that it's that unstable and the spin stabilizes it that much.
Click to expand...

I did feel a bit like Elon Musk: "This has about a 50% chance of working" I wasn't too worried about overall safety since I was confident in the stability of the entire stack so any skywriting would happen far above the ground. That's also why I started it off with an A motor--less burn time for something to go wrong. I also was launching at a small launch not associated with a club. I would not have been surprised if an RSO turned it down without a history of prior good flights.

boatgeek said:
The sustainer flight was straight on average though with a bunch of corkscrew. The booster took damage at staging. More data and thoughts later.
Click to expand...

Interesting, did you get any photos or video? Are you planning some more launches?

mbeels said:
Interesting, did you get any photos or video? Are you planning some more launches?
Click to expand...

No photos or video. I wanted to be ready in the unlikely event it went spectacularly badly. More flights are up in the air right now. (I'll be here all week!) The booster took some moderately serious scorches, so I think I'd need to reprint the booster to fly with confidence. That would allow me to fix some of the overbuilding I did (see earlier in the thread), so it's not all bad. I would want to try to figure out how to minimize the scorching for next time, though.

Maybe just use some high temperature paint, like engine or stove paint.
B

boatgeek said:
I would want to try to figure out how to minimize the scorching for next time, though.
Click to expand...

on my gap stage boosters, particularly when I use a smaller than motor mount diameter “chimney” internal tube, I cut a piece of aluminum can about 4 inches (shorter if needed) long and wide enough to unroll inside the chimney tube with a touch of overlap, placed immediately in front of the motor, to prevent scorching. Options on the outside include high temp paint or aluminum tape.

OK, so here's the good, the bad, and the moderately ugly.

The good:
* The 18mm sustainer fit perfectly into the ID of the 24mm booster. I knew that they nominally fit, but I didn't realize how ideal a fit it is. That meant it was easy to keep things collinear.
* Stability was good for the full stack. Nice boost off the pad.
* The sustainer was surprisingly stable under spin. Even though it had half a caliber of negative stability, it flew in a somewhat wide spiral rather than tumbling.
* The booster tumbled nicely on return to earth. It was maybe a little faster than I'd like, but fine for a grass field.

The bad:
* I need to figure out print tolerances better so that I have better control over the fits. The booster to sustainer joint was far too loose on just the motor and a bit tight with the body tube. I had to jam it in fairly tight, which led to a couple of other issues.
* It took a lot of tape to friction fit the booster motor in. Even with that plus a couple of wraps of electrical tape on the outside, the booster spit the spent motor casing. The electrical tape broke clean away. That might have impacted how much burn damage there was to the booster.

The ugly:
* The moment you're all waiting for: pretty serious burn damage to the booster. The stuff inside the body tube isn't really surprising, given that the booster spit the spent casing. The damage on the fins and inside the ring did surprise me. The fin damage probably isn't enough to keep it from flying again, but the burn inside the tube looks like it goes partway into the structure. As previously mentioned, this is overbuilt, but... 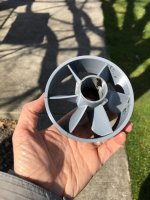 Next steps:
I like the concept, so I think I will replace the booster. I'll reprint it with thinner walls and fins, and adjust the tolerances of the tubes so that the sustainer fits snug but not tight in the upper part and I can line the lower part with a piece of 24mm body tube. I might leave clearance to line the sustainer mount with tin foil or can as mentioned above. I'll definitely print in the launch lugs too. Painting the outside with grill paint seems to be in order. I do have aluminum tape for the outside, which would be nice and flashy.

That doesn't look so bad to me!

mbeels said:
That doesn't look so bad to me!
Click to expand...

Maybe I just need to adjust my expectations! I do want to reprint the booster anyway so that it's lighter, spins faster, and falls a little more gently.

boatgeek said:
I do want to reprint the booster anyway so that it's lighter, spins faster, and falls a little more gently.
Click to expand...

That looks like pretty normal damage to a booster. They're pretty much in the direct fire from the next stage's engine. Your idea of using foil tape is a good one.

Awesome design and build @boatgeek . Any more progress on this?

lakeroadster said:
Awesome design and build @boatgeek . Any more progress on this?
Click to expand...

Booster Mark 2 is designed and with my friend to print. I’ll post more about it when I get it back and can share pictures as well as CAD models.

OK, here's an update on progress on this rocket. The first task was to redesign the booster stage. The fins and ring are much thinner (2mm) so the booster is much lighter than the old version (72g vs. 96g). The fins are also a simple arc section with a constant thickness rather than an airfoil. That made the design much simpler. Finally, I integrated a launch lug on each side (to maintain symmetry for the spin) and glued in a cardboard tube to hold the booster motor rather than extending the 3D print. That saved some weight and will make it easier to (a) friction fit reliably or (b) use tape retention.

As before, the fins all have a constant pitch. The leading edge has 1.0m of pitch and the trailing edge has 0.5m of pitch. OpenRocket says that the rocket will be going about 85 m/s at booster burnout, so the leading edge will contribute to increased spin up to about 85 RPS, and the trailing edge will contribute up to 170 RPS. That's a theoretical top rotational speed of ~5000 RPM, which it will never reach in practice. Doing some mumbly mindsims, I'd guess its top potential is on the order of 200-300 RPM, maybe a bit more if it has a longburn motor. As with the previous design, the pitch is constant all along the fin, so the whole fin will stall at the same time.

First off, images from the design in Rhino, seen from the top on the left and bottom on the right: 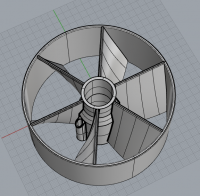 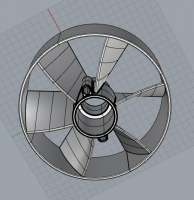 The next post will have pictures of the real units, with the old version on the top and the new one on the bottom. Still to come: painting with grill paint and then a new test launch.

And here are the pretty pictures. 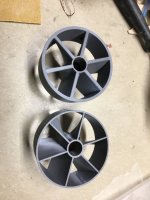 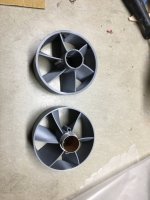 B
Thoughts on Booster backslide recovery on two stage.

3"-to-2" two stage scratch build, should fly in May