mbeels said:
Nice touch. I'm part way through a Star Orbiter and may borrow this idea.
Click to expand...

The fact that such a slick rocket has this nobby drag thing BIGger than the airframe.....not to be tolerated

Nytrunner said:
What is that all over the aft centering ring?
Click to expand...

it’s string it’s an idea tim from apogee does where ya get the two centering ring in line with the fins Tac everything with super glue together except the aft use the strings to then pull the aft ring back out and now do all the epoxy inside. Kinda a cool little trick
It works lol

All the gray goop in the last picture

Nytrunner said:
Not the first pic (i do similar to get the aft ring out after the mount is fixed)

All the gray goop in the last picture
Click to expand...

Adam3836 said:
its rocket poxy on the aft ring
Click to expand...

Copy that. Looked like JB weld and I was real confused

Working on repairs to my daughter's largest park flier "Spiralized blue tip". I flew it on a AT I 327 DM metal storm reload last month.

The rocket left the pad with athority, made it to 1000' and at motor burnout it pressure separated, caused a 4" zipper, shattered JLCR, broken swivel for the main.

The recovery harness kept the rocket together and it landed in the field with a light thump at 50fps. The chute floated about 1000' down range.

I have made the vent hole larger, I am going to tighten up the slip fit for the payload. I will also add shear plates and 2 2-56 nylon shear pins for the flights that will accelerate quick like this attempt. Next will be a AT J270W to 4200'.

soldered some stranded wire onto a TeleGPS. I had antenna fail. It works.

Starbucks app diverted our order to a huntsville location instead of our local Madison store for no apparent reason, so I got a rare leisurely drive down 565 past the USSRC.

Got the fins mounted on the Apogee Diamondback. This rocket build has given me grief so far. First thing was I papered the fins, got in a hurry and had a quarter size section of paper on one of the fins badly wrinkle and had to be removed. Repaired that and mounted the fins using the fin guillotine. Removed the rocket the next day and discovered I must have bumped it, because the fins looked more like a x-wing. Carefully removed the offending fin and remounted correctly aligned. This thing is correctly named because I've been snake bit so far (nothing wrong with the kit, this is all on me). 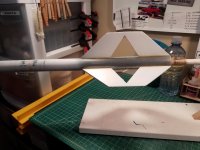 I always find it funny how people say "can't wait", and then they wait. Seems like they're underestimating their own abilities.

jqavins said:
I always find it funny how people say "can't wait", and then they wait. Seems like they're underestimating their own abilities.
Click to expand...

More of a excited to get it can’t wait, not figuratively. After the raving reviews for it and less tinkering around on it seems like, will be worth the wait yes.

Didn't fly anything of my own, but pushed the button on a couple dozen flights as LCO at the Music City Missile Club launch. Lots of people had a not-fun time attempting (usually succeeding) to find their rocket in two-foot-tall dried-up soybeans. Pretty decent attendance, and the food truck had a wonderfully greasy delicious double cheeseburger.

Built another Eggfinder, supposedly for my Frenzy XL, but it will end up in Sharon's "Grand Optimist". I cut two nosecone sleds back in May, one for the Frenzy and another for the Optimist. Apparently I built an Eggfinder and installed it in the Frenzy before our long vacation in Red River, NM. and forgot about it.
The good news is that the latest Eggfinder was built in about an hour and a half, and it WORKS!

prfesser said:
Didn't fly anything of my own,
Click to expand...

Was a nice sunny day finally. Got primer on the repaired MRDM. Have a feeling it will develop the red disease tomorrow, and hope it will fly in primer this Saturday. I have a I285R that should be a nice flight

No, the fellow is doing it (hopefully) next weekend.

Re-upped for another year of NAR...lasts night actually.

Taped up a few rockets for paint or primer.

Located a forgotten supply of epoxy that I had stashed in an ammo can. The idea was to be able to store it in an extra bedroom over the winter without the fragrance of BSI and others wafting through the house.

Cleaned off my outdoor workbench so I can perhaps get some painting/priming done in the next few days. Pine needles and leaves were getting obnoxious. The prevailing wind is from the west so I stand on that side of the bench when I paint and the vapors disperse away from me. Still wear a 3M organic vapor mask when I work out there. to paraphrase Sargeant Schultz: “I schmell NOZZING!”

Examined the fuselage balsa stock of the 7-8 boost glider kits in my build pile for correct balsa grade and grain. All but one are well chosen. The other one will require me diving into my AMA FF modeling balsa wood pile...Related news, the small hand plane I ordered from Amazon for carving airfoils into glider wings arrived and is perfect!. See videos from JHaerospace.com (Josh Finn) for videos showing the process and several outstanding boost glider kits. Home video production values but content “for days”.

Built a rocket sled and finished inter fillets on a Mach1 Area 51.

Stuck an eye hook in my basswood-balsa bulkhead with epoxy, stuck that in a coupler, and stuck the coupler inside half of a star orbiter tube.

Since I wanted a payload tube, I cut slots in the nose cone shoulder and glued two offcut dots of wood in the mouth of the tube. Now I have a twist lock!

Thats the last structural piece, so I can begin the finishing process prior to hooking up all the shock cords

After drooling over the Mach 1 site and then picking myself up offa the floor after I saw the shipping costs for my shopping cart (US$350 to US$900 for a US$300 order), I was then inspired to design a clone of the Mach1 Daedalus in open rocket, mainly to see if I could achieve a similar outcome using junkshop and scrap items I do have, plus tailoring the nosecone and boat tail to suit the nosecones I can buy and afford to ship in from the US.
I think this project is going to have to be a 3 to 6 month affair once I can feel confident to place the order and await the long shipping period to Oz.

Pulled out a five or more year old storage box, and decided the grandkids might enjoy making a scaled down version of my 38mm ArchAngel and 29mm Black Ice, into a D (maybe E) sized Stealth designed by Art Applewhite.

Finally finished painting my Farside-X clone. Prepping and masking 9 fins is a PITA !

After much pandemic-induced procrastination, I finally started reading "Make: HPR" and I'm already pleasantly surprised. Chapter 1 covers some basics, such as differentiating between LPR, MPR and HPR using impulse. An extremely interesting chart lists individual impulses and runs from 1/4 A up to 8Z. As everyone knows, H marks the dividing line between MPR and HPR and the book makes a further distinction after O, calling this stage "amateur rocketry." Included are the impulses for the Mercury Redstone, equivalent to a Z motor, and the Saturn V, sitting at an 8Z motor or 1.07E+10 Newton seconds. That helps put my last D engine launch into perspective. There follows more details on MPR vs HPR and a run-through of a "typical" HPR flight.

From there, it looks like the book outlines a few HPR rocket builds and even throws in an Open Rocket tutorial. Chapters include L1, L2 and L3 certification, dual deploy, altimeters, tracking, etc.

The introduction also says that this book picks up from its predecessor, "Make: Rockets," which discussed LPR and "basic rocket science, including construction, aerodynamics, simulation, tracking and electrical engineering." I'm hoping that since I've recently finished "Handbook of Model Rocketry" that I've covered an adequate amount of that material, but I have to admit that I'm a mite curious about this predecessor book now as well. Has anyone read it?

I prefer the other motor scaling convention of X, Y, Z, AA, AB, AC, etc.... (Shuttle SRB clocking in as an AD)

Plus I absolutely disagree with lumping in rockets with liquid engines like the Redstone or SatV in the counting since they're essentially gas tanks with a hot end.


ewomack said:
I'm hoping that since I've recently finished "Handbook of Model Rocketry" that I've covered an adequate amount of that material, but I have to admit that I'm a mite curious about this predecessor book now as well.
Click to expand...