Ulexis said:
I attached 5 fins to a rocket.
Click to expand...

Yes sir, 54mm version. Figuring out what to add to the 3" version right now since I like the kit so much.

No need to buy stands after a launch day!

Goblins and Berthas and Halloween Oh My...

Super Big Bertha with E-Rockets upgrade fins, papering, and basswood half-rounds.
Also armored the corners and bottom edges of all Berthas with thinned epoxy. Am tired of dinged fins. Will see if it helps. You can see standard Estes 2 tubes + coupler issue lol. I like single tubes but I had these so used them. The Super is also sleeved with a BMS coupler - wanted to try it on a non-sensitive build.

A scratch built Baby Bertha with TTW fins and a 24mm mount...Boo!

That was a NICE one in prev post BTW, will have to paint this one a little brighter for spotting and recovery.

Looking at a BT80/2.6 Goblin with a 4 x 24mm cluster (rings from Rocketarium) an a slotted BMS tube I have. That should be smokin' and cheaper than a single 29mm mid-power. Cluster + TTW = sturdy. If I keep weight down it will fly on 4 C6-5's with adapters. Even cheapier.
No sanding or VOC in shop due to temp animal hospital status.

Got my rotisserie running and a first and a second coat of 105/205 on my Soller Composites fiberglass sleeved tubes.

Lost my Estes PS2 Nike smoke along with a motor casing! Oh well it happens.. though with just a wee bit more forethought, preventable!

XrayLizard said:
Lost my Estes PS2 Nike smoke along with a motor casing! Oh well it happens.. though with just a wee bit more forethought, preventable!
Click to expand...

Did the same the other day with a citation patriot and a 24mm casing...also preventable..lessons learned

rklapp said:
The Protostar decals do not like the metallic paint, huh? I thought it was very stressful.
Click to expand...

They went on ok and stuck pretty good. Flew it today on a D12 and it was awesome. Had a nice slow roll all the way to apogee.

Busy 36 hours, cloned an Asteroid Exploring Dragon Ship thing and a Centuri Magnum Sam-3. Many thanks to Boyce Aero for the dragon capsule and tail shroud retainer. No ideas yet on paint schemes....

I primed an Estes Crossfire and touched up the paint on my DS Mini. The mini will be ready for decals and clear in a few days. I also added the 2nd base layer coat of white on my DS Jr. It will need a 3rd coat still. This will receive the same color treatment as my mini to be ready for Michiana Mayhem.

I rescued Big Daddy from a tree about 30-40ft high no branches till the very top, built a contraption out of latex tubing, pvc tube and a fishing reel to hurl weighted dowels with fishing line tied to it. Worked but took some doing to get it up and over to tie on some masons line to it. Some damage from a crash two weeks ago (I tried a C engine, and it did not work well.) The damaged tube delaminated when the moisture in the mornings and the fog hit it. I need to cut off about 2" of the tube and replace it with new tube and a coupler. Got the RMS back!! That was what I was really after it costs almost twice what the rocket costs.

Yesterday, actually... Demo flights for some friends who had never been introduced to my obsession. 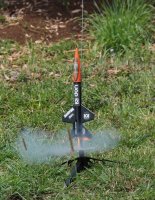 Fun Rockets version of Doug Holverson's brilliant Silver Hawk. The glider is somewhere in about 5 acres of Lantana.

Dusty, a mini engine prototype with guitar plectrum fins. Hit around 600 ft on an A10-3T, followed by no ejection charge. Somewhere on the neighbour's farm now. My friend is devastated because he punched the button and a prototype is gone. I said, "Mate, if I have the computer simulation and pages of build notes and I couldn't build another one, what chance would my customers ever have?"

He settled after that. 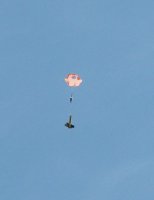 Sugarbag, our first kit. Another beautiful C6-5 flight. The original badly painted prototype. Couldn't kill it with a stick.

All in all a great day. Lessons learned and new converts to the hobby!
X

XrayLizard said:
Lost my Estes PS2 Nike smoke along with a motor casing! Oh well it happens.. though with just a wee bit more forethought, preventable!
Click to expand...

I’ll keep looking for it... lol
With any luck the Nose cone, fins and 29mm hardware will be ok

Filleted the launch lugs on the LOC Blaster.

Re-arranged the rockets on my workbench so I can more room to work...on more rockets...d’oh!

XrayLizard said:
I’ll keep looking for it... lol
With any luck the Nose cone, fins and 29mm hardware will be ok
Click to expand...

I went back and looked for mine with my drone . It was in corn. Still couldnt find it

shawn_rocket said:
They went on ok and stuck pretty good. Flew it today on a D12 and it was awesome. Had a nice slow roll all the way to apogee.
Click to expand...

It reminds me of the probe ship taking off from earth in Wall-E.

Worked on the Astron Explorer.

The slots were not that bad. I wasn't confident, so I practiced on a spare tube. It was not horrible. Sharp new blade, support your work, use a straight edge (if you can) and be careful. I can go into more detail if anyone is interested. Here on TRF, someone mentioned putting clear tape over the slot outline on the wrap-around template, prior to cutting it out This helps keep the template from tearing and bunching up when cutting it out with an Exacto blade. It works, thanks.

There was some controversy about whether or not to pre-paint. A good point was made about wanting to have alignment marks and lines available which would be covered up by painting. The consensus was that, once assembled, it would be extremely challenging to do a good paint job. I put small pieces of masking tape over guide marks and used thin strips of masking tape for the fin guide lines. I have dry fitted it with the jig enough times to be confident that my tick marks will be sufficient. Then I prepainted.

I am real pleased with the silver paint. I hesitated to buy it because the cap looked more grey then silver. The label says: gloss chrome aluminum. All the right words, so I took a chance. Here on TRF, someone mentioned that black made a great base color for silver. It was also mentioned that you can top coat within 2 hours or wait for more than 48. Already in a daring mode, I applied the black base, then the silver about 15 minutes later. It looks nice.

As you can see I am not ashamed to use the great information provided here to improve my rocketry. TRF is a great resource. 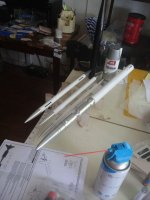 I did 20 internal fillets in one sitting. Well, I think 19 actually, but who's counting. Kind of messy, but they will get the job done behind the scenes.

Finished turning, sanding and 3 layers of glass on a 12" DIA NC. Took the masking off a 3D V-2. Painted a Nike Smoke and another soon to be Stubby Heat. Mounted the tubes for "bomb rocket".

Getting some ducks in a row for a rocketry club talk on altimeters this coming Thursday. A few different people are presenting on different altimeters. I am to describe the TeleMega by Altus Metrum. Just making sure I have files and hardware ready for the night.

I got out Sunday for my first launch since Father's Day. Four launches, three successes, and no damage ain't a bad record.

Top row: an unnamed canted fin rocket that will eventually get lights for a night launch on an ancient Estes B14 and Spruce Goose, an HPR-capable rocket built entirely of wood (including rail buttons) and epoxy on a CTI G126 WT.

Bottom row: Drag Queen, on a B-C-B cluster of QJets. One outboard didn't light, and the wad of masking tape carried the launch controller wire with it on a spiraling flight. For this we have safe standoff distances. And Cheeto Dust, my L1 cert rocket on a CTI F79SS.

All that plus our TARC team got 4-5 flights off and recovered both rockets safely even after one got stuck in a tree (twice).

Ran out of epoxy! Mixed up the last of the 105/205 with colloidal silica for the first internal fillets on Fusion, sets of external fin fillets on Mach1 micro mamba and Patriot, as well as the Estes super big bertha. Now to see if Ace has some West Systems in stock.

Just ordered my Apogee X-15. If anything can get my MPR build enthusiasm back, it will be this one.

Cl(VII) said:
Just ordered my Apogee X-15. If anything can get my MPR build enthusiasm back, it will be this one.

I bit as well... I'm considering getting an X-15 Grande to do a comparison build... https://sngaero.wordpress.com/

Got a box of motors!

You must build it stock. Then you must buy another one to get creative with.

jqavins said:
You must build it stock. Then you must buy another one to get creative with.
Click to expand...

I'm trying to convince myself not to build it with a 38 motor mount. The G80 Loki White would look amazing in that rocket. Flame to rocket ratio would probably be >1. You may be right, I may have to go for a second down the road.

I placed the decals and the first layer of clear on my Darkstar Mini. Will add another light coat or two of clear and see how nicely it polishes up.

My daughter wants to build a new rocket and she already picked a name, Mako. We sat down tonight and modeled a fincan for it based on Estes 2,5" Pro Series II tubing. We also started the OpenRocket sim for it - looks to be a good match for the Aerotech F67 motors. 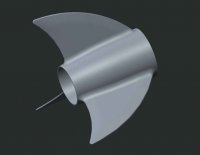 The boat tail is sized to fit around an Estes 29mm retainer. She likes the looks of Von Karmen nosecones over ogive so we will design it tomorrow night. I'll have to bust out some math since the VK is equation-based. Both the fincan and nosecone will be 3d printed using black PETG. This will be her third mid-power scratch build - not bad for a 10-year old.

Sat down and finally designed a dual deploy sled assembly to fit inside a 29mm coupler (TOP LEFT pic).
Easy Mini with 2ea A23 for the 29mm tube that is reduced on top of a 38mm min diameter rocket.

These will be on top of various rockets with 38mm motors, 54mm motors and 75mm motors (lower pics).
These redundant dual deploy systems will sit on top of reducers from larger body tubes with larger motors.

Now I can start making chips to realize these projects.
This will be a fun winter.