I didn't do much rocketry wise today, all I did was spray the first layer of primer on my Darkstar Jr nosecone. I want to launch a few rockets tomorrow.

Finished the the Low Boom SST, the waterslide deceals were diabolical. The hardest part of the build. 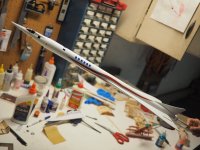 After some long delays between chapters, I'm getting back into reading more of Stine's "Handbook of Model Rocketry, 7th edition." Today's chapter covered scale models, but not just buying a kit and following directions, real scale modeling that involves getting original plans, scaling them and building from scratch. As usual, some parts really showed their age, such as the drawings from 1967 and 1969 and the suggestion to write handwritten letters to aerospace companies asking for information. Another section did mention Rocksim, though, but only once and very briefy. Since I don't plan on building a scale model from scratch this chapter didn't have a lot to offer me except some interesting information. I also think that if I did take on this challenge I would use software far more than this chapter suggested. Nonetheless, it mostly kept my interest.

Only a few chapters left.

Ordered an F7 flight controller that is Ardupilot compatible. The idea is to revamp my Vertical Trajectory System with some more capable hardware, and firmware that is accessible (open source).

Details on the VTS here.

I had to go to the office and pick up all my stuff, as it won't be re-opening... We'll all be working from home from now on, but this allowed me to retrieve my Mauna Kea marble and hoodie. I also did my early voting. Then the family did a Zoom meeting. After that, I had enough time to get another set of fillets done on the Wildman Andromeda before MNF started...

A but more work on the Astron Sprint XL and the L’il Ivan.

Apparently when I primed the Panavia clone with white flat primer I went a bit “snowblind” and there are blotches where the coverage was not uniformly thick. Oh well. Another addition to my chore list for tomorrow.
B

o1d_dude said:
I’d caution you about the sharpness of the legs on those sawhorses but I’m guessing you’ve already discovered that.
Click to expand...

Nothing sharp left on this one. Been using that old thing since I was a kid. In the process of retiring it for a launch pad made from 2 inch PVC for larger rockets. Might have to throw it up for sale one day.

Vdutel said:
My buddy asked if I could take on a project for him. Jumped on that ASAP! He had a 16’ Church Pew and wanted it cut down to fit 2 big guys.. lol aka Bench for Dude Room...
So here are pics as it came to me during the redesign and pics as I’m sending it back to him!
This has been a fun project not rocket related.. Now it’s time to finish a Rocket as I’m jonesing to Launch!!!
Click to expand...

Delivered to my Buddy’s house last night... He is Totally Stoked on the finished project. Lol made them stay in the house until we had it on his deck!!!

Desert-rat82 said:
Built rockets with my grandson 300 miles apart! Built Baby Bertha’s. First time we tried this. We are already talking about which to build next.
Click to expand...

You are Awesome!! Virtual Launch date??? I bet he is one happy camper!!!

So today I’m going to take one section I had left over from this Pew Project and make a seat for my Daughters bed!! She will be able to put her Sports bag or Back pack on it, sit at her desk on it or whatever she likes.. Since I have the middle support leg to use as a pattern I’ll cut 2 so they are made from same type of wood.. Going to be a fun project.. I’m excited ...

Just finished reading TRF, just like every other day for the last three months. Big difference today is that i'm doing it from my lazy boy in front of my big screen TV with a wireless keyboard and mouse, instead of on my Ipad in bed at our place in Red River, NM. Finally back in Goodyear after spending the summer up in the cool high country of Northern New Mexico. The fishing was great, but no rockets was kind of a bummer.
It was somewhat surreal sitting down in the rocket room today and looking at all the projects that I was working on back in May. Still need to populate the avbay and nosecone sled for Sharon's "Grand Optimist", which should be pretty easy, since it's an ultimate wildman. She want's to fly it on a 98/10000 "Sharon's Sparkler" that we cast back in May to fly at Airfest. Now it's scheduled to fly at "Aguila Skies" back here in Arizona next month with TRA/PHX.
We also need to start setting up some of our smaller rockets for the SSS GHS Memorial launch coming up the third weekend of October. Might need to start a list....

Finished assembly on my asp tall boy. Excited to see if the full version actually flys well. Its sooo tall....lol

Primed up my new scratch build and spent the rest of the day thinking of a name for it...its my version of the dual 18mm rear eject, its part viking, part esam (parts from damaged beyond repair rockets) and all awesome. Im thinking Raptor? Next up on the thinking list is paint scheme...im thinking dark blue but Im not sure on stickers on the dark blue...

I went to the park to launch 4 rockets today, but left without anything flying. There were too many people around and school teams playing soccer on the fields. I thought they were just Summer and weekend leagues, but the schools apparently use them too. Friday will be my next chance to launch. I'll just have to go in the morning while the winds are usually calm and before any teams have the fields.
Last edited: Sep 29, 2020

Built that one last month. Its was practice for what I am currently working on: Orbital Transport.

I finally epoxied the silly landing springs on the Smurf rocket. Can't wait for JB Weld to dry so I can finally stand it upright. Can't believe it took so long to get there!

Got some white primer on my Viper. Filled in a few spots with CWF and sanded again today.

NateB said:
I went to the park to launch 4 rockets today, but left without anything flying. There were too many people around and school teams playing soccer on the fields. I thought they were just Summer and weekend leagues, but the schools apparently use them too. Friday will be my next chance to launch. I'll just have to go in the morning while the winds are usually calm and before any teams have the fields.
Click to expand...

It’s annoying when the leagues use the soccer fields to play soccer.

At the parks, there’s sometimes a couple small football leagues, about a dozen each. We’ve also disturbed a few baseball games. The park is designated for rocket launches but over the past 6 months, we’re the only ones I’ve seen launching.

Sanded and re-primed the Astron Sprint XL nose cone and filleted the launch lugs. Tomorrow the aiframe and boat tail get their first coat of white primer.

Filleted the fins of my Semroc Lil Ivan and finished “case-hardening” the balsa nosecone. Sanded the nosecone to fit correctly into the body tube.

I have previously mentioned the beautful C-grain balsa fins and with white primer in tomorrow’s forecast, I took some photos of the fins this evening...

Looks like they were cut from the same plank.

EDIT: Note to self - You’re gonna need a launch lug on that little bird before you prime it!

Got out the Kitten car cutting paste to cut out some scuff marks on the Nike booster lower airframe. It carried a lot of marks from making two trips to Queensland for launches. The white is automotive two-pack so it is coming up nicely. This is the undamaged section of airframe that survived a ballistic flight from about 6k'. My first bad recovery .

It is reminding me how much I hate washing cars.

OverTheTop said:
It is reminding me how much I hate washing cars.
Click to expand...

I still use the drought as an excuse not to wash the cars. Besides, it might rain this weekend.
X

Holy Schmolly, OTP has the cradle of Cradles. lol!
At least you seem to have a nice and properly dirty work area.
Can we all agree that our Fine Feathered freind, John Coker, has way,way, way to clean of a workshop ?
John ??

XrayLizard said:
At least you seem to have a nice and properly dirty work area.
Click to expand...

That's the heavy mechanical workbench. There is also rocketry workbench, electronics workbench and another one in the garage for when working on the car.

Just finished the series AWAY on Netflix about a crew going from the moon to mars and there journey. I must say it was pretty good kept my attention. Check it out if you find some free time
Cheers
Last edited: Sep 30, 2020

Cape Byron said:
I still use the drought as an excuse not to wash the cars. Besides, it might rain this weekend.
Click to expand...

Some people complain about rain after they've washed their cars because it leaves water spots. I complain because it means I've wasted a chance for nature to wash my car for me. It doesn't clean the undercarriage, you say? That's why I drive through deep puddles at speed.

We just finished Ratched (series) on Netflix. It is the backstory for the nurse in the book/move One Flew Over the Cuckoos Nest. Well worth watching.

Also watched My Octopus Teacher, which is a documentary about a guy who spends a lot of time learning about an octopus. Well worth watching also, and it is only a single session.

Made progress on OT. . In west central Florida, today was the first day in forever when it was not as hot as Hades, so I did yard work between glue sets.

The jigs are fantastic, nearly idiot proof. I did manage to build the other jet a bit out of plumb. It works but it takes a bit of persuasion . I'll give it a shot tomorrow, probably sand it a bit and try for a better fit. 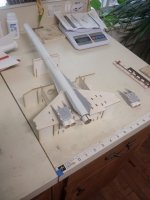 jqavins said:
I complain because it means I've wasted a chance for nature to wash my car for me.
Click to expand...