What are you working on?

Just curious what kits or rockets you are currently in the midst of building. I am finishing my 2.6" PAC-3 and about to start my Pro Series Nike Smoke. Really want a fiberglass kit so might be trolling for ideas here too.
S

I've got two builds running now, which is unusual for me. Three if you count my wife's first rocket (she's doing the building, but there's a lot of coaching, so it FEELS like a build!). We're building Mini DX3s, hers is stock (well, using Estes 29mm retainers), I'm building mine dual deploy because I thought it'd be a fun challenge. 38mm av bay is tight though!!
My other build is a LOC Stovi, also modified for DD. That one has finished ground testing, and is just waiting on paint. Trying to come up with a soviet-looking scheme that isn't the same as LOC's, but that's tough- I can't stop thinking red and gold!
I need to actually get out and fly though, it's been more than a year

If you're looking to get a fiberglass kit, can't go wrong with Madcow IMO, especially now that they have Rocketry Warehouse kits. My LAST build was a Mac Performance Rayzor, and my god, was that a straightforward process! Excellent fit and finish, and terrific documentation. Strongly recommend Mac if you're looking for a great kit...they thought of EVERYTHING.
D

My L3 rocket- Wildman 6" V2. Will be flying it at Midwest Power if all goes well

djs said:
My L3 rocket- Wildman 6" V2. Will be flying it at Midwest Power if all goes well

What I do need is a 75mm #40 graphite nozzle for an L EX motor for my punisher. Will try to track one down when I have a little more cash.

Really looking at the Formula kits especially the 54 - but I like a lot of wildman's and Madcow's. So many rockets, so little money.
D

viciouspeanut said:
Really looking at the Formula kits especially the 54 - but I like a lot of wildman's and Madcow's. So many rockets, so little money.
Click to expand...

Wildman Jr kits are a good way to start learning dual deploy (if you want to go that route). Also capable of being flown motor eject.
S

viciouspeanut said:
Really looking at the Formula kits especially the 54 - but I like a lot of wildman's and Madcow's. So many rockets, so little money.
Click to expand...

Ain't that the truth!

Working on a 2.6'' thin wall fiberglass Madcow Tomach. I've been taking photos of the build and will probably do a write-up for the fun of it. I have been creeping on this forum for a while and have learned a lot of information from all the great posts.

I'm working on 3 right now. A 3" MAC Zodiac with the 54 mm mount, a 38mm md scratch build out of thin wall fg, and a 4" scratch build with a 54mm mount out of some loc tubing that I glassed. The Zodiac is almost finished, just have to test the apogee charge and get some paint on it.

54mm semi-scale Falcon Heavy with drop-off side boosters. I'm thinking 29mm in the side boosters and 38mm in the center core so I can longer burns. Maybe F59s + H110. I'm in the middle of designing some latches to 3-D print so my Eggtimer and use a servo to control the booster drop.

I am working on repainting my Public Enemy SA-14 Archer and getting her decorated with Stickershock decals.

Plan on flying her at Bong Recreation area the end of September at the WOOSH HPR launch.
Also looking forward to seeing my youngest son (20) trying for his LVL1 HPR Cert flight with a LOC Precision V2

I guess I can get an input. I have a lot of fiberglass to make a tube, some vac bagged carbon plate and a 4 grain casing. Its all just begging for a 38mm rocket. Its either that or I waste my cash on getting my Mariah 54 in the air.

What do you guys think?


Sent from my iPhone using Tapatalk

soopirV said:
If you're looking to get a fiberglass kit, can't go wrong with Madcow IMO, especially now that they have Rocketry Warehouse kits. My LAST build was a Mac Performance Rayzor, and my god, was that a straightforward process! Excellent fit and finish, and terrific documentation. Strongly recommend Mac if you're looking for a great kit...they thought of EVERYTHING.
Click to expand... 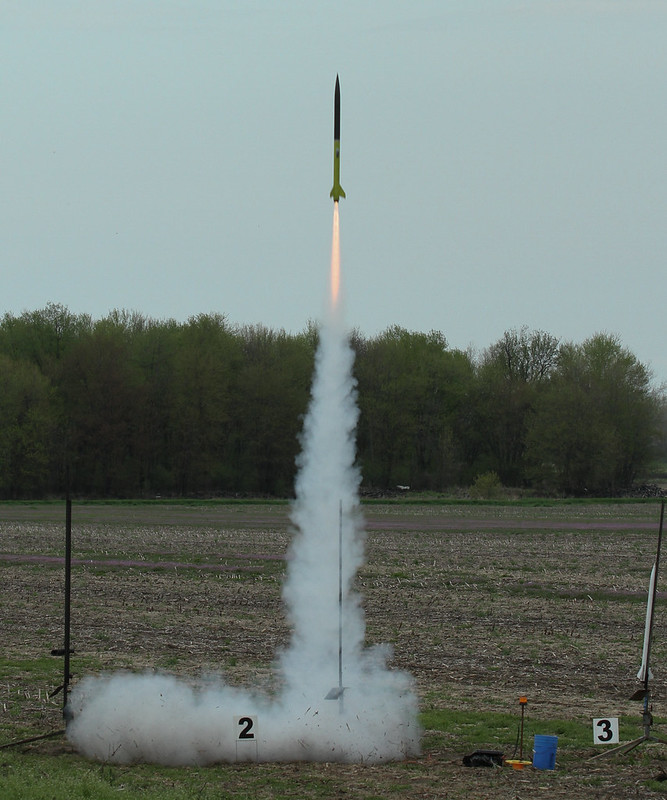 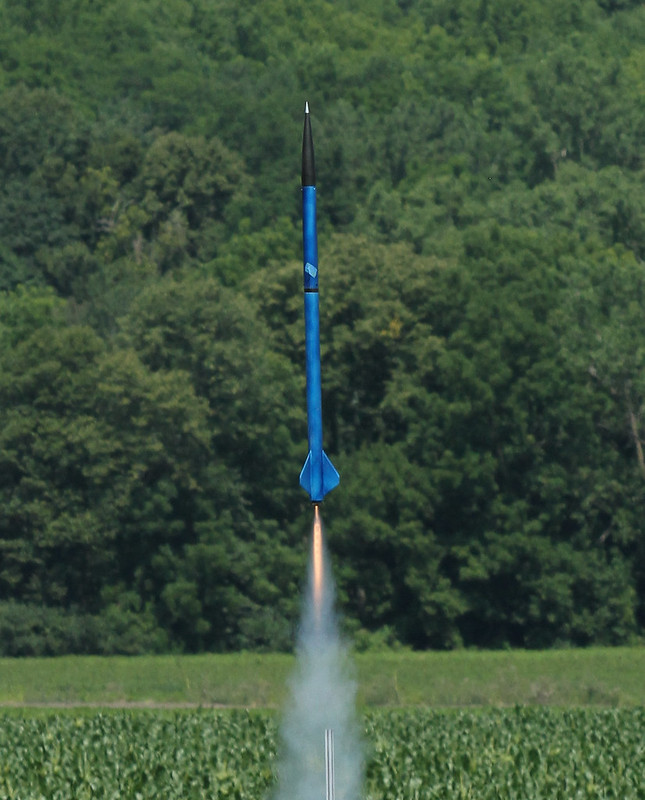 Got him cutting up something..... different.... for me right now.

Im really leaning towards a Darkstar (or Frenzy) or a Punisher now. I have never flown dual deploy, but want to so something that makes it very straightforward is best. I know the Punisher is HED so its a little different and that is pushing me to the 3" split fin since both are traditional and that might be best for my first. Also want them to be able to fly motor eject as my rocket fund is split between casings and kits so it might take a few months lol. Main goal is to keep it under 3k feet with the big Loki "I" motors and also be able to cert lvl 2 next year without hitting stupid altitudes. Wouldn't love to lose a $200 kit and case lol, but I know its a risk. Still learning about tracking but its a bit more than I am ready for, plus I would need a HAM license right? Even if everyone at my club uses the same system and can assist in tracking (so I would only need a transmitter)?

Tracking can be fairly easy. Some of the systems require HAM, but there are a few 900 mhz ones that don't. when you build, plan a nose bay just in case you need it. even using an all in one tracker/altimeter now, I still build with nosebays in case. 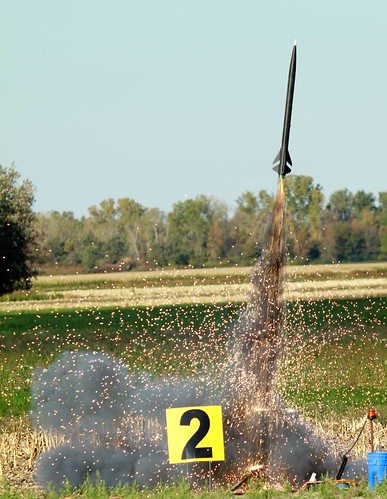 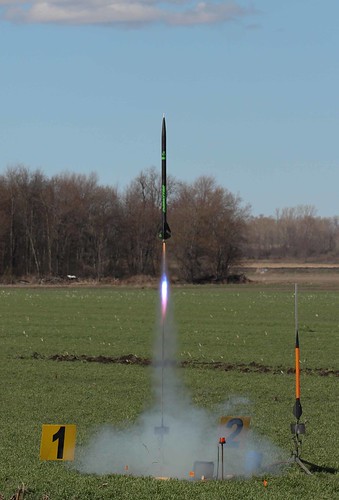 It's gonna be a good show whatever happens.

Working on wet sanding my L3 rocket and also building a AMW FiberMax.

I am just finishing up some final touches on my first 2 Stage a RW Double Shot that I hope to fly in a couple of weeks at URRG. I have about five others that are undergoing some sort of repair or modification. I find that even after I think I an done building a rocket and flown it I still come home and have to mess with things...

Getting close to finishing my PML Endeavor that I want to use for an L2 cert attempt. Still needs rail buttons, external fin fillets, then final sanding and paint.

After this I'm going to build a FG Ultimate Endeavor.
A

Just finished an Estes Mercury Redstone, it turned out real nice. Now starting an Apogee Saturn 1B. If I can get the paint on the 1B to turn out anything like the Mercury, Im considering the Sirius Saturn V as my next build. I thought about the Apogee Saturn V, but I want a big one.

When that's done, I'll start what will be my 3" minimum diameter altitude attempt rocket for next year's AirFest. I plan to modify/bash a MadCow Adventurer 3" with the DX3 5.5:1 VK nose cone. Current plan is to put it up on the CTI M2245 (95% M).

Down these mean skies, a kat must fly!

Wet/Launch season in NorCal isn't for a few more months, so I've got some time.

My build pile keeps growing. Currently I have 2 Estes PSII Nikes that I need to build; a Nike Nike Smoke might be fun! Then there is the Mega Der Red Max (a 38mm demands to be placed in it!), then I am finally getting around to acquiring the final parts I need to build a scratch 4" Aerobee 150. The Aerobee is my main winter project.