I've been thinking of making a rocket boosted rc airplane. I was thinking of controlling/piloting the airplane with a camera feed, but it seems that is illegal.

I'd like to ask if anyone has advice on making a rocket-boosted RC airplane? Also, what can I do to control the aircraft? It would help to get some sort of pilot's view of the aircraft, but I don't want to violate any laws

First off, do you know how to fly R/C already?

If not, you need to learn to fly R/C first.

The boost part is usually the hardest, so you need more piloting skill for that than for the glide part.

Really ought to consider this in several phases.

Learn R/C if you do not already know.

Work up a design, possibly adapting some off-the-shelf plane if it would be suitable (most would not be suitable unless designed specifically for Rocket Boosts).

Using the right kind of motor. No crazy high thrust stuff. Some of the best R/C RBG's fl with long burn motors like E6 (24mm reload or expendable) or F10 or G12 (32mm reloads). Though some others can be flown with 2-stage D12's and smaller ones on C6's. The FASTER the boost, the hard it is to control it and the stronger the glider has to be to not shred (My E6 powered gliders would all shred on an E15).

Various other things to work out and get right before test throws for glide and then....

Fly it, get experience with the boosts. Trim the model between boosts till it requires less piloting corrections.

Once you are accustomed to it all and boosting and landing with no problem, only then try onboard video for piloting (FPV = First Person View). Even at that, I do not think that FPV for rocket boost would ever be a good idea. Because you want the model to boost close to vertical, but the front facing camera would only show you sky on a good boost, no reference point. If you see the horizon in the camera view..... you are pointing more horizontal than up! So unless the model could boost up by itself without any R/C correction, that would not be good. For the glide down it'd be OK.

But you'd have to get used to FPV first too. Fly FPV on a regular plane, something slow and not twitchy, and get used to that.

I myself have just gotten into FPV recently ($80 FPV goggles and $25 camera-transmitter in one). And most of my flying so far has been on a Quadcopter, so I could take it slow and even stop. Last week I tried FPV on a small 20" span flying wing, in way too much gusty wind, and had a lot of trouble. A couple of crashes, fortunately no damage. Should have tried it in calmer weather, and also realized it was way too maneuverable in roll so I need to reduce the aileron throw a LOT. Actually I may switch over to a more conventional plane with dihedral, using rudder, a much more docile (and larger) plane, a deign used a lot for FPV. Later, I'll post info and a pic on the camera/Tx I am using.

Whatever FPV you use, you'd not want it to be very big or heavy. Fortunately some good options for lightweight small FPV

As for PFV flying legality, technically you should have a spotter with you. So if you lose orientation of where you are in FPV, or the video gear goes out for any reason, the spotter could point out where the model is. That spotter can be anyone.

BTW - a photo of someone else's plane, an "Easystar", with FPV added to it. This would not be good for rocket conversion, I'm just showing an example of a good plane to learn doing FPV with.

All of the stuff below is moot until you have a model that you can fly well to begin with. But since you;d need ot have the right kind of model to carry the camera gear, you would want to take that into account (3 ounce camera on C6 powered model = NO!)

I&#8217;m currently using the Eachine TX03 camera with built-in TX. It is very small and weighs about 6 grams. A separate 3.7V Battery is about 3 grams. Banggood.com has it for about $27 at their US store, $19 at their main store in China. Here is just how small that is, next to an 18mm engine. 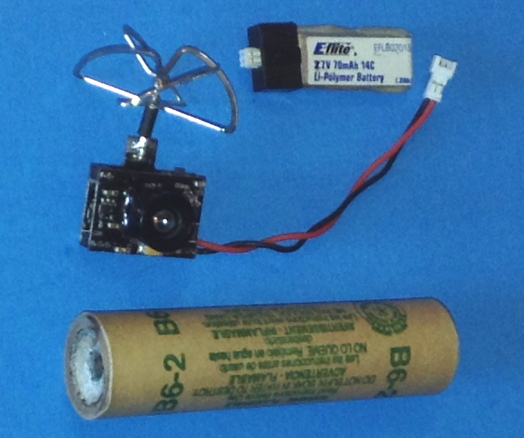 The goggles I&#8217;m using are the Eachine VR D2. Pretty much a modern smartphone type screen a few inches away, rather than the small types like Fatshark which cost many times more. This one has a DVR to record the flying, and two different types of antennas, the "mushroom" or spiral type is omnidirectional, while the flat "patch" antenna has a narrow reception field of view but works at better range (so you try to point the goggles at the model if the omni starts to lose it, while also turning the model BACK!). The electronics of the goggles chooses moment by moment whichever has the best signal (diversity).

There are certainly better cameras, and better goggles. But for small models, it&#8217;s not practical to lug around a bigger heavier camera, with a separate video transmitter. Mainly a better camera if you wanted better image quality for a recording to play back, as opposed to just FPV flying.

Now indeed I do have a better camera and separate Tx, but that&#8217;s for a bigger model later (Quadcopter). And ultimately for that Tx I plan tp plug it into a GoPro so for FPV flying I can see where to aim the camera, then after landing get the high quality GoPro video file for it. But that would be pretty heavy for most R/C RBG&#8217;s. I&#8217;m mainly planning that for Quadcopter flying, MAYBE on a big electric plane like Radian.

OK, so some past onboard video stuff I did. In the early 2000&#8217;s, there was the &#8220;Gearcam&#8221;, an onboard 2.4g video camera transmitting video to the ground. I never tried FPV, it was just for recording onboard video (a few years later, the 808 type &#8220;keychain&#8221; cameras came along, making live video obsolete since the camera was ampler, lighter, easier to use, and required none of the ground equipment (to record the video on the ground, in those days, I had to use a real VCR powered by a voltage inverter off a car battery!). Also, sometimes the video signal cut out, even when not nearly as far away as the range should have been.

Anyway, a link to a page that has info on the modified &#8220;Cuda&#8221; R/C RBG that I added a rotating camera pod to. For launch the camera was pointed at the tail. Then after transition to glide, I flipped a switch for a servo to unlock it to allow a rubber band to rotate it 180 degrees to face forward. 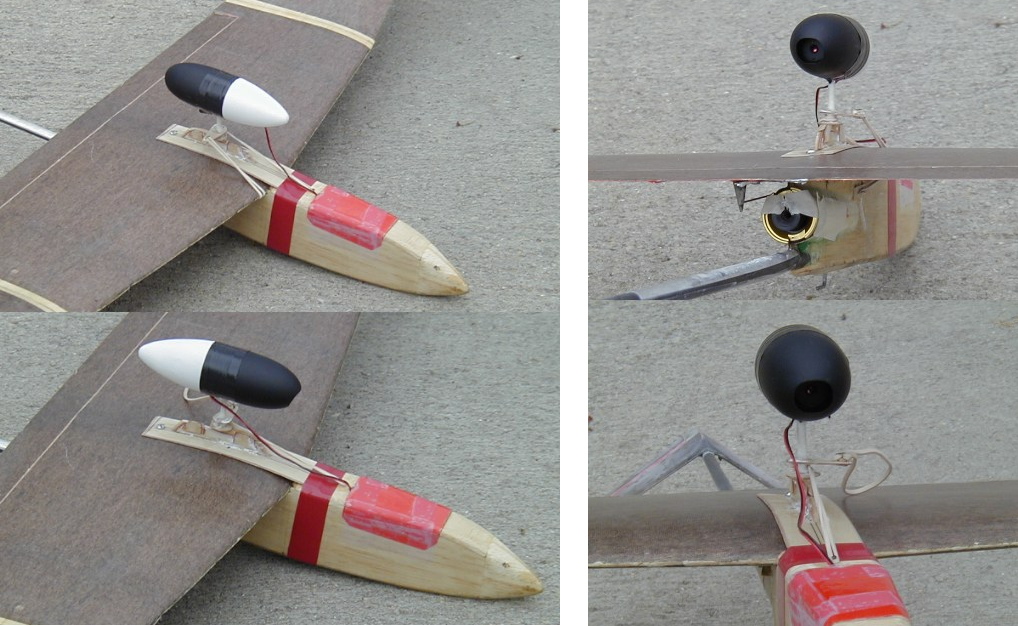 And here is one of the best videos of a boost. Note there are some tiny elevator (V-tail) corrections on boost, but the model was very well trimmed out by that flight so it did no need much correction.

Here is a much shorter one using two staged C6&#8217;s. The camera only looked at the tail. Good way of seeing how a mixer with and inverted v-tail works out for flight control.

Also, for the heck of it, video from doing some practice landings for the FAI S8E-P event. I practiced by using a short Hi-Start to pull it into the air. The model had a big flap that I activated shortly before landing (can see it deployed in the ground shadow after the first landing, at 1:51. At 1:57, it is retracted and you hear the servo when it retracted). And the onboard camera was an 808 Keychain type camera, just to document the flying for review later. The way these models have to be maneuvered around to try to land on a spot at an exact time, it would not be very practical to use FPV (note the landing spot is often not visible until the last moment, while for FPV landings you need a good view of the intended spot long in advance and make a long mostly straight approach).

I've been thinking of making a rocket boosted rc airplane. I was thinking of controlling/piloting the airplane with a camera feed, but it seems that is illegal.

I'd like to ask if anyone has advice on making a rocket-boosted RC airplane? Also, what can I do to control the aircraft? It would help to get some sort of pilot's view of the aircraft, but I don't want to violate any laws
Click to expand...

George is definitely the one to talk to about RC rocket gliders . . .

Where are you located ?

What sources have told you that it is illegal ?

What type of flying are you looking to do ?

I think it would be pretty tough to pilot the boost using fpv only, even looking rearward as George was saying, unless you are using some sort of stabilization electronics to keep you vertical, even if trimmed well, there is always some wind etc that will impact things and there just isn't enough time to react. The E-6 is a nice mild long burn motor and what I prefer if you can stick with a reasonable size/weight for that motor(8-13 ounces rtf) Once you are comfortable with RC piloting, then you can play with a rocket conversion of a normal plane or an RC rocket glider kit purpose designed, then play with the fpv aspect.

Here's a video looking forward and down on one of my RC Interceptor rocket gliders, you can see as George said you don't have any reference till you pitch over unless you can pan the camera, if you had any roll it would be very confusing.

And here are some front and rear view videos of an X-15 profile model, you can see that even when trimmed well, you still need some adjustment on boost, as well as pitching over at burnout:

Great videos George, especially the first. And what an awesome field!

Frank, what were you using for your video camera? I am sure it was light!

Just a good quality 808 camera from bayourat velcrod in place.

I originally posted this question in an RC airplane forum, but they seem to think I was trying to make a drone of sorts. Hence, the 'illegal' statements.