I have 2 of these old kits and have been really looking forward to building one. I don't know how old either kit is but they have different parachutes and different payload sections. One of the kits has a spiral flimsy clear tube and the balsa parts don't fit very well. The second one is a yellowing clear tube that is thick and the balsa fits nice. I was going to replace the clear tube with an after market payload section, but no one makes one. Semroc has the balsa pieces, nose and transition but no payload sections. Since I could not find one, I just dipped the thicker clear section in future and it came out nice. I will begin on this build while my Firecat is drying. I have a busy month ahead so my construction time on these rockets is limited.

Do they say what the maximum altitude is (with an egg)?

I finally got around to starting on my Scrambler. First I had to cut the fins from the old balsa that came with the kit. I applied 3 coats of Aerogloss balsa sealer so the fins, cone and adapter are smooth and ready for paint. I also applied 2 coats of future to the payload section and most of the yellow cleared up. I had a couple of runs with the future but was able to smooth them out. The engines are done and waiting for the glue to dry. Should have the build done today and primed tomorrow. The Firecat is all painted just waiting for the gloss to dry so I can add the decals then the dullcote.

The Scrambler is built and will get a coat of primer tomorrow. This is a bigger rocket than I thought it would be.

I remember the first Scrambler I ever saw fly. At least I think it was the Scrambler. It had the clear payload and there was an egg in it. IIRC it was 1969. It was my first organized launch at a park in Green Bay WI. The guy had a raw egg in the payload with tissue for padding. The flight was perfect, except he forgot to attach the second parachute to the payload.

The egg wasn't just broken, it was scrambled!

I have the rocket primed and sprayed a coat of flat white. On my next day off I will apply a coat of glossy white.

Well it is all done as far as paint goes. I still have the decals but I don't know when I will get around to that. They are old so I am applying Liquid decal film to strengthen them. I may never find out the true colors, but I sure like the orange, white and blue. I wish someone had the clear payload section for sale. Semroc has the cone and transition but no payload. Semroc 's nose and transition is dead on accurate. I don't mind Estes going back to balsa nose cones, after 3 coats of Aerogloss balsa sealer it looks like plastic. 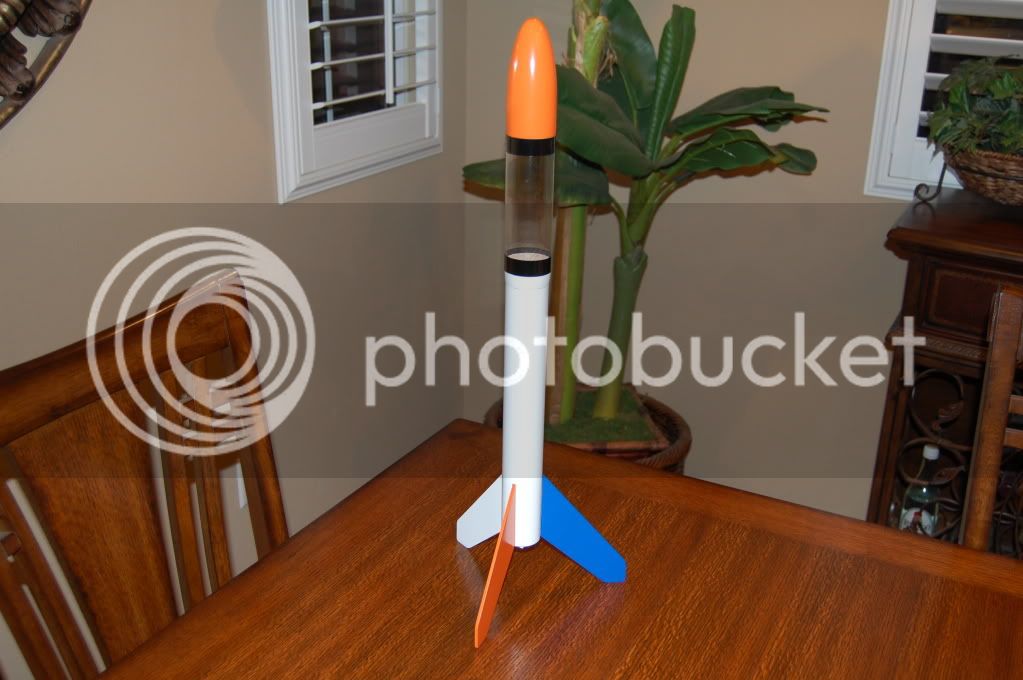 What brand tape did you use to mask off the fins? Very nice and clean color seperation..

Nice job on the build! I like the paint scheme. The colors should make the rocket fairly easy to track.

Another Vintage build complete, off to the next project. The decals were old and went on ok. The wrap around was tough, but snugged down with setting solution. These decals are not the typical Estes silk screen. These are like the after market decals where you have to cut each individual decal out. With other Estes decals I can just rough cut the decal paper and after sliding off the backing they are in the perfect shape because of the clear film Estes puts over them.

Congrats on a great job! As a BAR from the mid-70s, I truly enjoy seeing high quality work that brings back those days.