V2 Rockets, why didnt they use solid fuel propellents?

After watching a bunch of documentary's on V2 rockets, they used liquid oxygen and alcohol as fuel, which made the design, manufacture, and launching of them extremely complex. (especially the turbo pump!).

I read an article saying that when Werner Von braun was a teenager, he set a cart of solid rockets off, and it raced down the main street, and he nearly got arrested.

Why didn't he use Solid Fuel in the V2 rockets? It would of made everything so much simpler!

If he had used solid fuel, manufacture, transport, and launching was simple, do you think the shape of world war 2 might of been different, as it could of become a front line weapon?

Or a smaller solid fuel missile that was designed to travel a few kilometres, as a front line weapon.
B

On a documentary about von Braun he said he always thought his rockets were landing on the wrong planet. I think he was using the Nazi war machine to help develop rockets as opposed to trying to create true weapons.

I dont think it was till the minuteman and Polaris timeframe mfg of large enough reliable solid fuel motors was possible.

burkefj said:
I dont think it was till the minuteman and Polaris timeframe mfg of large enough reliable solid fuel motors was possible.
Click to expand...

oooo im not sure what they are, ill have to google them!

Pressed double-base is fairly far down the performance scale. Remember that Tsiolkovsky had already run the numbers on a great deal of possible candidates before WWI.

Zeus-cat said:
The Germans used a lot of man portable solid fuel missile launchers in WWII. The Panzerfaust and Panzerschrecks were widely feared by allied tank units. The Panzerschreck was similar to the US bazooka. The Panzerfaust was an even simpler design that could be used by just about anyone.
Click to expand...

oooooo rightoooo! Ill need to google these too, as I havnt heard of them before! 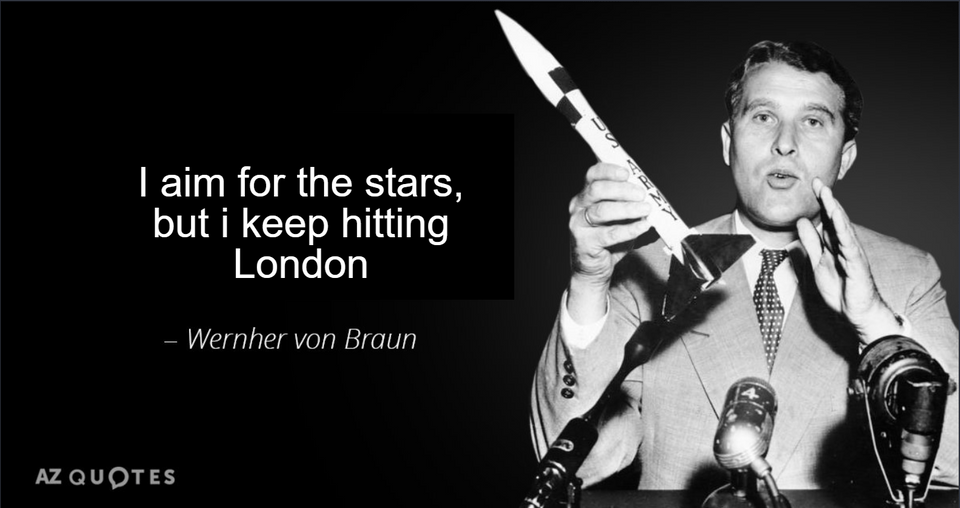 The CTO at my company was born post-war thanks to the V-2 (not the Honest John depicted here). His dad's first wife was killed in a V-2 attack. Some few years later, the fellow remarried and along came the chap I know. He got a bit of a chuckle out of the picture.

There was no real development of reliable, large solid motors that could lift that tonnage and go that far across the channel.
Certainly no solid motor technology of that time could work with the guidance system it had either.

In a very horrible irony, more Jewish slaves died of accidents and starvation building the V-2s vs. how many the English it killed.
Probably the only reason Hitler kept the program going as long as he did, can you imagine the psychological effect it had on Londoners waiting for the next one to drop through the clouds?

More V2's were fired against Belgium than England.