I don't have the video skills of @rklapp , but figured I'd tried to help those who haven't launched much lately live vicariously through some videos of my recent launch.

Hard to see descent, recommended go to end of video and then back it up. I was happy with a nice straight boost, the rotor retainer really worked to keep it straight.

Someone asked about the sizing of the vents, when I built it I eyeballed it. I didn't paint this before the flight (had about 1 spare hour with free time, sunny day, and light winds and said, let's just run with it), turns out to be a good thing. I think @cwbullet said somewhere that rockets should earn their paint. This one is a good example. The piston moved backwards to the vents, but apparently there was too much vent, and it didn't deploy the piston all the way. So two of the fins deployed, but one didn't. It was an interesting recovery, it didn't rotate but it kind of tumbled/stumbled down.

I don't mind failed recoveries when 1. no one is hurt and nothing, including the rocket is damaged, and 2. i can figured out exactly what went wrong. The frustrating ones are the ones you can't figure out. This one is helpful. THIS rocket can be fixed by covering up the forward ends of the vents. If I do a rebuild of this, I would use a LONGER piston, to make sure it is long enough to fully release the rotors. Just have to be sure the CG stays well forward (since the motor goes back with the piston, might change CG too far back.)

Hmmm....... wait a minute. The only thing I DON'T like about the Texas Twister and this design is that it comes in nose first, and my main problem with that is that it is landing on the painted nose cone tip. Since the probability of landing on asphalt and concrete is proportional to the time spent finishing the rocket, I don't like this part.

What if I used a really long central piston, and shoved the piston and motor waaaaaaaay out the back, so the CG changes from FORWARD of the fins/rotors (where it must be for stable launch), so CG is BEHIND the fins? Now it descends motor casing first, my favorite recovery. Okay, next rendition.

Also the rotor retainers, two things I need to fix. on one side need them to be less far forward, this is how the Texas Tornado is set up. The one thing here with current system, it is hard to hold the rotors up all together and even to slide it over the fins. Course, now that I think about it, it WOULD be easier to get the rotors in place WITHOUT the bands on, DOH!

Someone sent me an Apogee Texas Twister in the TRF Secret Santa (may have been the first one they did) many Christmases ago, I finally got around to building it (will show it here later), but looked at it and thought, I can do better!

So I upscaled it to from BT-20 with 13 mm mount to BT-50 with 18 mm mount, using pieces from a Custom Rockets Fiesta bulk pack that I got a LONGER time ago.

The Texas Twister hinge material looks like Clothes Drier antistatic sheets, it's flimsy and I've read some reviews that it seems like it wouldn't hold up very well.

I learned the "double-tape hinge" technique from a Qualified Competition Rockets Glider I built a long time ago (company made some neat gliders and helicopters, sadly no longer in business). The double tape technique was definitely an improvement from single tape, but still the hinges tear loose over time. I added my own touch, sewing them in. For some reason I picked dental floss as my "thread of choice", and it turned out to be a pretty good one. It comes in it's own pack with a cutter, it's relatively cheap (more than sewing thread, but still not significant), it is MUCH stronger than thread, and as opposed to Kevlar thread which I think gets brittle with CA, floss LOVES CA, wicks it up and locks it tight. I originally started with this about the time of the Whopper Flopper Chopper, see attached posts 3-5 for details. Over the decade, I haven't changed it that much, except I only sew in the lateral margins, once those are locked in (since that's where the stress is) there is not need to cross the whole hinge.

Okay, here's my first try at a build thread. Be kind. Always hazardous to suggest something is really new. These are features of this helicopter that I think are either new or at least uncommonly used: 1. Size. Certainly not the largest ever launched, but I think it is bigger than...

Anyway, Texas Twister works, I will post it, but seems like there is much more fin area that could be used, which is what this rocket does. Hopefully after I fix the vents we will see 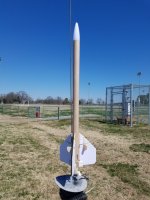 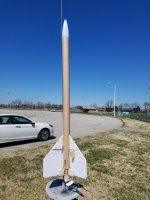 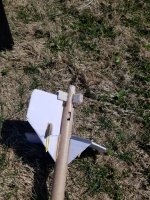 I built but haven’t flown the apogee Texas twister. Neat idea. I think it can definitely be improved on. The surface area for the movable sections of the fence is certainly much less than it is possible. Also would like to upscale it to use standard 18 mm motors. This is the last of my Custom...


Should have done this one first.

the rotor stops have two different angles, I think I got them backwards, as when deployed the rotor angle is 90 degrees, as opposed to the Apogee site 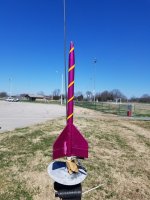 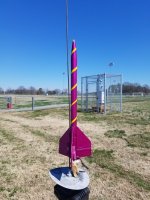 I lost the decals so may paint scheme is a bit different.

Ironically I had planned to showcase this as the use of vinyl tape (colored electrical tape) to cover the spirals ( which I didn't fill), but with just two coats of primer and the Krylon Glitter paint, I couldn't really see the spirals anyway, so just went with a corkscrew pattern. Vinyl tape is about the only tape I have found so far that works with a spiral pattern on a tube, most flat tapes can't "bend" to match the complex curve.

Anyway, nice flight. Interestingly it did spin fast (even with the rotors bending about 90 degrees), and came down horizontal, kind of thinking this actually turned out to be Horizontal Spin recovery, but not sure. Anyone else have this experience?

Subscribed. I like the spiral design. I haven’t done a piston yet. Well done.

I saw that, and thought that this was the announcement of a club launch... I was thinking that it would need a Hostess Twinkie inspired drag race... Little Debby and Dolly Madison would not be welcome.

BABAR said:
I think @cwbullet said somewhere that rockets should earn their paint.
Click to expand...

I am not the first and I will not be the last, but that is definitely me!

cwbullet said:
I am not the first and I will not be the last, but that is definitely me!
Click to expand...

I think they should earn their clear coat.

B
Pirouette- nose up version of Texas Twister/Gyroc