Anyone going to be there? I might.. no idea what I'll fly yet, as I'm currently 4000 miles away from my rocket stuff.

Well, I'm temporarily out of things to bottle, so I'll be there - weather providing.

Given that two flights need my Quantum, I'll likely pass on the Nike Apache test this time.
D

Charles_McG said:
Well, I'm temporarily out of things to bottle
Click to expand...

If you need help "emptying" out bottles so you have some free ones, I think the good folks at TRF can oblige.

I will be there. Anyone know if WM Tim is coming?
W

crossfire said:
I will be there. Anyone know if WM Tim is coming?
Click to expand...

I will be there

I know a few others will as well. Looking forward to it!

Been burning the midnight oil nonstop since October... Might be time to show up at a launch with no rockets just to see friends and help recover. I miss y'all!

We need to get our park sticker, depending on the weather might even fly a rocket.
D

forecast looks cold.. not sure if I'll be there or not, or will just show up at QCRS next sat.

I'll be there - need to break in my freshly built 3" punisher and my scratch built gigantic daddy has a new set of decals to get dirty...

What a great day to fly rockets! True, it was cool, but low-to-no winds at Bong! Nice day, and the larger group that showed up to play surprised Frank and crew. Good times had by all on the frozen, but thawing tundra!

Mark K. got things rolling with his silver phenolic rocket on an I65W...a great tribute to Jack Svetlik who passed away recently. Jack was a faithful attendee of TWA launches, and other launches in the Midwest for that matter dating back to the early days of the Danville launches. Jack would share his stories and photographs with all; in his white T-shirt, khaki pants, regardless of the time of year or weather. We miss you already, Jack! Unfortunately, Mark was too quick and I didn't get the camera assembled in time to photograph, but I'm pretty sure Kevin H took better shots of this flight than I could anyway!

I had a Madcow Big Fizz (4" Alpha) prepped for 6 months or so. Flying the alphabet G-K on Sunday, we started with this one. Mild flight on a fun little H115 Dark Matter.

It was so good to see Bill Bertoldi back at Bong. After being away for some time due to health issues, he returned with his usual clever style and warm smile. Great to see you, Bill! Bill built a Wildman Super Jart and adorned it with Duck Dynasty gear in honor of the wonderful Peggy! Clever name, if you look closely from top-to-bottom on the airframe, it shows Love Si-Ants. Bill and Peggy, both teachers by trade, love science. Nicely done! Bill and Peggy:

Frank became jealous and wanted his picture with Peggy too!

After all the photo goodness, Bill flew it on the lovely Aerotech J800T. Love that motor! Great flight and excellent dual main chute recovery right by the pad; nicely done!

Gary Mr. Top Flight Recovery Pletzer was on hand to melt some prairie grass, hang out, and visit. He flew the dependable RW Rogue on a sparky J motor. It was loud and the Rogue flew straight and true. Recovery was great, even if the JL Chute Release did let go a bit early.

Who doesn't love an Initiator?!?! Here's one with a great (bright!) paint scheme on an Aerotech E15-4W. Nice majestic boost with the crackle of White Lightning!

Eric B. promised us a flight with his new 3" Punisher and he didn't disappoint. Aerotech H242T for the boost and dual deploy recovery. Gotta hook you up with a "standard" Top Flight chute! Nice flight!!!

Charles McG broke out of the fermentation plant for a few hours to fly some exciting creations. First up an upscale Quinstar on a G79 Smoky Sam. Cool rocket, beautiful flight!

Another tribute to Jack! I didn't have any of Jack's favorite I65W motors, but I had a CTI I55 Mello! I55 Mello+light winds+Caliber ISP=good combo. Just kept burning and burning and burning; said hello to Jack way up there! What Mellow propellant lacks in visual appeal it makes up in long burn excitement....pictures just aren't the best way to experience this propellant.

Finally got my son Cody to get out of the truck. He launched his Rocketry Warehouse Scarab 54 on a CTI G80 Skid...fun little motor and landing near the pads...good job buddy!

My Dad Tom decided it was time to participate, flying the venerable PML 1/4 Patriot on an Aerotech I161W....just remembered that was my second HPR flight ever in January 2000. Great combo! 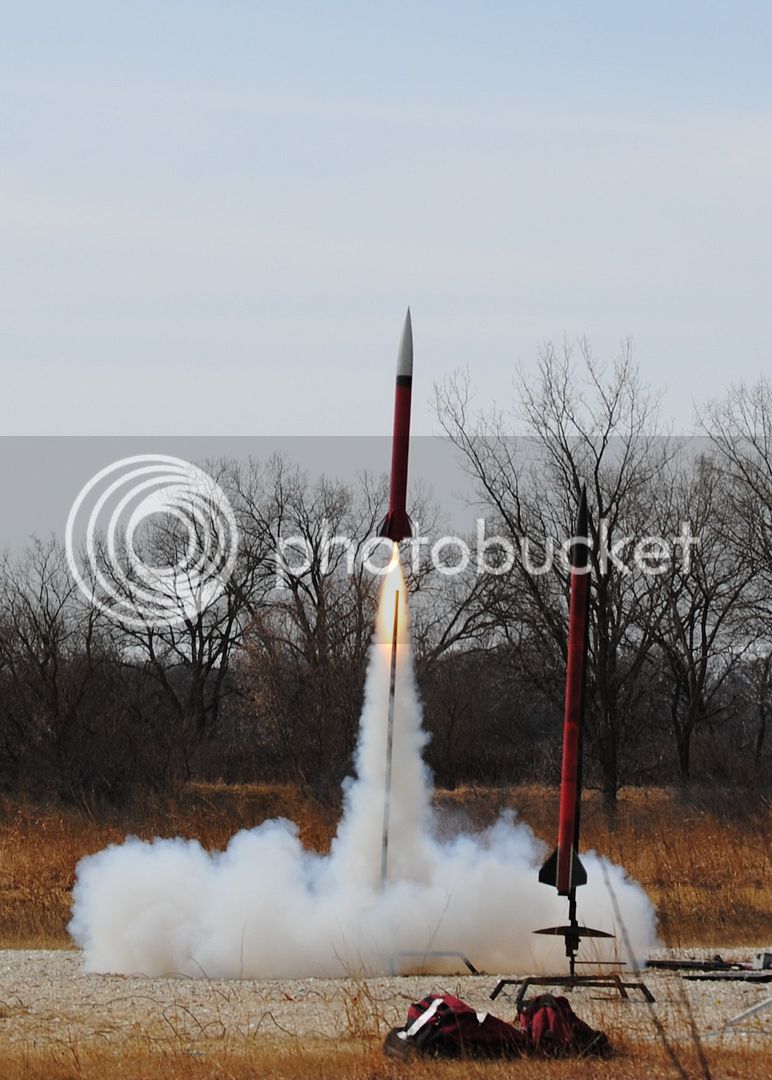 Next to the Patriot on the pad was a 3" Wildman Dual Deploy. Wooshed the skies on an Aerotech J401FJ I believe. Another cool flight!!!

Preston N. put together an EX 75-4G Sparky for the launch. Coupled with a RW Formula 150, he executed a stellar flight. Lots of smoke, sparks, and noise; what's not to like!?! Nice flight, Preston!!!

They're back....with minions! Dave B. on site with kiddos and a new 5.5" Hawk! (Re)Certifying in style using the Hawk and an Aerotech I500T. Solid boost, tons of whistling from the fins during the coast, and a great recovery in the soft grass. Missed the liftoff shot, but captured recovery. Welcome back, Dave!

This guy too! Jason T and Ironman prepare to certify in style with the classic I-Roc and an H100W. I was skeptical when I heard H100 in combo with a good sized 5.5" airframe...the beauty of Loc rockets, no sweat! Nailed it! What a perfectly majestic combo! Congrats, and welcome back Jason!

Recovery on some crazy military type chute that oscillates back and forth...kinda neat!

Charles McG back on the range with a German V-something. Looked like an Estes 2.6" V-2 was the starting point, and Charles went from there. Bob was concerned about stability, but it ended up flying beautifully! Cool rocket and neat flight!

Preston and I are members of the old AMW propellant fan club. Collectively, it's scary how much genuine AMW propellant we've burned over the years, and still have yet to burn. Preston brought a 75-2500 (2G) K600 White Wolf for his 4" Competitor and I brought a K600 White Wolf for my 5.5" Magnum. Similarly at MWP11, we both showed up with AMW L666 Skids (Preston in a 4" Dominator and me in a 5.5" Magnum). Sick minds think alike?:dark: Anyway, classic AMW propellant is great; if you don't believe me, just ask Preston!:wink:

Preston used a single Wildman Big Un to get his K600 started....she slowly built smoky pressure adding dramatic affect to the liftoff. I like the plume surrounding the rocket from the pressure build up (note, normally this smoke careens off to one side or the other....due to lack of wind, it slowly climbed right up!).

Lost sight of this one for a while after it hit 6628', but she eventually reappeared right over the runway under main chute. Well executed!

Last of the collection for the day. Loc 3.0 teamed up with ol' buddy Andy K. to fly a 5.5" Amraam. Jay did a great job finishing this scale monster; I need lessons on how to paint decent during our cold, crummy winters! Match of the day was a K850 Dark Matter, a nice long DMS 54mm motor. At 109" long, I expected it to be slow off the pad; on the contrary this thing leapt off the pad and I only captured one shot just as it started up the rail. Great flight, smooth recovery just on the other side of the access road; a great way to end the day. Box 'er up and ship 'er out!

Great to see so many faces, both old and new at the TWA launch on Sunday. I think we were all a little surprised by the numbers that turned out. Thanks to the TWA crew for putting on a great launch; had a blast and can't wait to do it again! Watch the TWA website for Kevin's photos...he was there and he always takes stellar photos!!! See you next time!

Thanks for the great pics, Eric. I'm pleased to make it to a recap, at last!

It was built from a Big Daddy with an Leviathan nosecone and lots of laser cut fins. Decked out in a Der Red Max Hydra theme.

Alas, I paid so much attention to the issues people have with Big Daddy deployment that I forgot about drag separation. The loose nosecone is out buried somewhere in the prairie.

But it flew straight until burnout!
P

Nice pics and launch report/debrief Eric! Pretty fun day at the Bong and no wind made it great even though it was just about 30 degrees out!

Great pics and report, thank you for sharing!

Eric
Great job on the shots. Very cool to see the LOC kits out in numbers again.

Charles_McG said:
Thanks for the great pics, Eric. I'm pleased to make it to a recap, at last!

But it flew straight until burnout!
Click to expand...

Ahh...gotcha. Cool rocket and good to see you guys!


pnobile said:
Nice pics and launch report/debrief Eric! Pretty fun day at the Bong and no wind made it great even though it was just about 30 degrees out!

Thanks man! Always great to see the Nobile clan!

Great pics and report, thank you for sharing!
Click to expand...

Thanks Justin! Missed you out there...catch up with you in Spring!


crossfire said:
Eric
Great job on the shots. Very cool to see the LOC kits out in numbers again.
Click to expand...

Thanks Gary! Great to see you out there! I really like that Rogue; bright colors and flies really nice!

Eric C. that was my Initiator, thanks for the awesome picture. Also hello everyone, my name is Dan Cummings, I am a friend of Eric B and just did my first HPR launch (and got L1 certification) on Sunday as well!

randomdan said:
Eric C. that was my Initiator, thanks for the awesome picture. Also hello everyone, my name is Dan Cummings, I am a friend of Eric B and just did my first HPR launch (and got L1 certification) on Sunday as well!
Click to expand...

I didn't make the launch, but nice to see more people out. Welcome to HPR!