To DD drogue or not to drogue, that is the question...

I flew my 3rd dual deployment flight Saturday, and while it went off without a hitch again, I did notice the two halves of my BSD 38 Special were flying about without much if any stability, trading places without any one part leading or following. Upon recovery, I saw a couple places where the paint was gone from a tube to tube hit . I am using 20' of kevlar recovery harness between the two sections.

I did buy a Sky Angle DD streamer and connected it to the upper section's u-bolt, but it does not seem to do anything in flight...hardly visible and certainly did not effect the stability at all.

An easy answer would be to extend the recovery harness. But, I saw another flight Saturday from Wolfstar's Thor X where a drogue was connected to the upper half and held the entire assembly in a very stable decent without tumbling about. It also seemed to fall at least as fast despite the drogue. That got me to wondering if that wasn't a better way to go overall.

Viperfixr said:
The question is: do you use a drogue or not. And, if you do, what did you use for one? If you do not, why?
Click to expand...

Going drogueless is often a matter of personal taste. If your rocket falls reasonably well without one, I'd say just extend the shock cord.

I use a drogue on my last two designs, because I also use single-breakpoint recovery systems... the drogue and main come out of the same section. The drogue, when released by my low-altitude PRM device, pulls the main parachute out and becomes the nosecone-parachute.

The thing to remember about drogueless is that, as you've noticed, everything just kinda flops around wherever. Most of the time it behaves itself, but sometimes the results can be disastrous.

A friend used to fly drogueless, until one of his flights went awry. Everything was great on the way up, and looked great coming down, until we went to recover the rocket. Then, we discovered that the Kevlar shock cord had broken and the fin can (and motor casing) were missing.

We knew it had all been attached most of the way down, so we started thinking about where it was, geographically, when the main came out, and we started looking in that general area. After about 15 minutes, we found it -- fortunately, the crops were out, so we were looking in cleared fields.

When we picked up the find can, it was readily evident what had happened...

While flopping around, before the main came out, a length of shock cord had looped around behind one of the fins. When the main deployed, the shock cord pulled tight, pulling it into the rear of the fin.

The shock cord then cut through 1/2 of the G10 fin root, until the Kevlar was abraded enough to break, causing the fin can to free-fall, and everything else to descend under the parachute. There were sufficient marks on the airframe to show exactly where the Kevlar had rubbed before it finally started cutting through.

3" and below airframes I don't use a drogue but I will use a streamer or sometimes just the Nomex blanket. Here on my 4" Nuke I was experimenting with my Chute Tamer and just let the blanket flop around as a streamer. 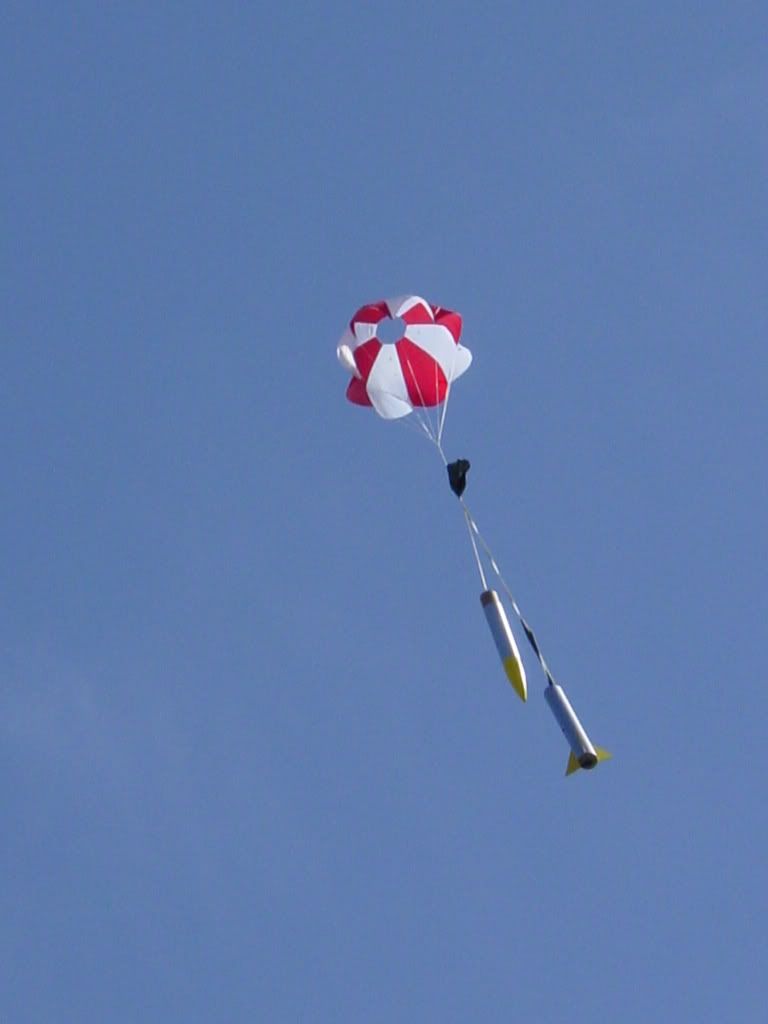 This is my Yank Mystic Buzz (3" airframe) with a streamer that was quite visible at apogee and tracked well. 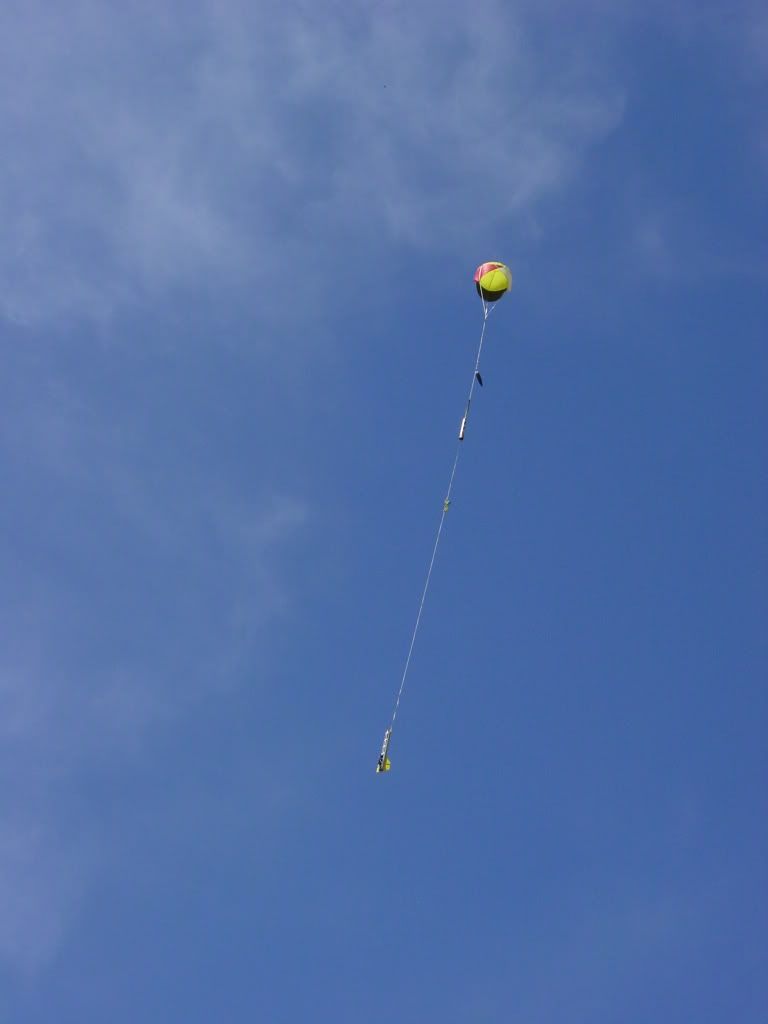 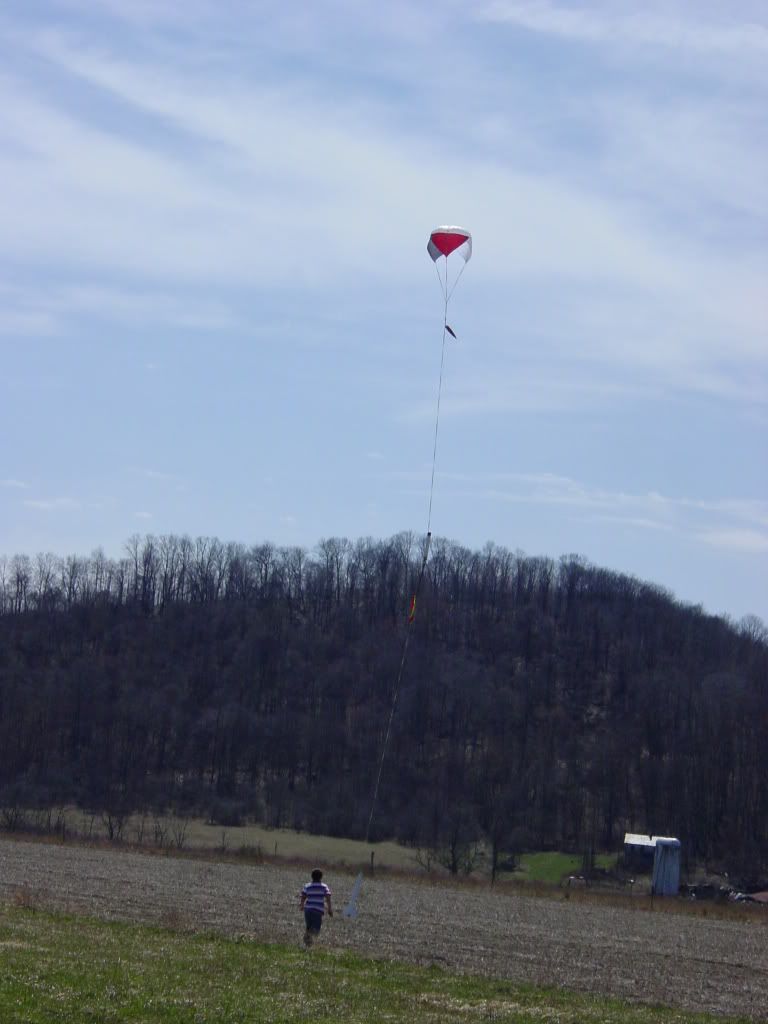 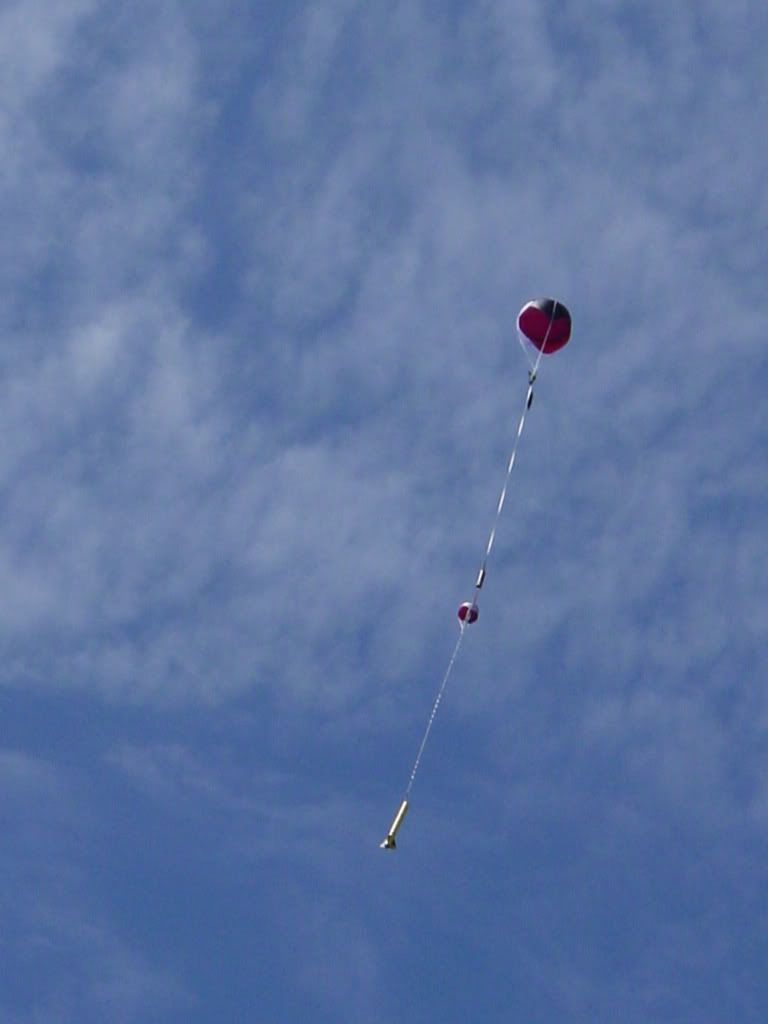 I would advise just to do some experimenting to see what works best for you in your situation.

In the larger projects I need the drogue to aid in two events: 1) allowing the airframe to decend in a simi controlled manner as designed, and 2) to keep the "pointy" end above the booster so that when main chute deployment occurs, the rigging will not become tangled in the fin-set. To that, I will add that placement of the drogue on the shockcord is also important, and I do not place the chute mid-way, but much closer to the e-bay...generally 12" from the booster, maybe a little more.

For the smaller projects, which are usually in the 6-7 lbs or less weight range, a really long shockcord does a great job in slowing down the airframes for controlled decents.

Len_Lekx said:
I use a drogue on my last two designs, because I also use single-breakpoint recovery systems... the drogue and main come out of the same section. The drogue, when released by my low-altitude PRM device, pulls the main parachute out and becomes the nosecone-parachute.
Click to expand...

I concur, for the same reasons. That's how I've built my Level 3 rocket, using a blacksky ARRD for the low-altitude deployment. Very unlikely to get tangled, as long as I pack each chute and its lines well.

This is a good point to which there is no simple answer.

It depends on how stable the separated parts fall.

First let me say that for MOST [ there is always the exception] DD you want the tube with the main in it to fall above the fincan. When the main deploys, there is nothing that can drop into it, deflating or entangling it.

So that's the easy part. Getting everything to fall from apogee in proper order is the toughieee.

Things like multiple fins [Thor] or longer length fins can cause the fincan to rotate at high speed ,[I call it helicoptering] causing the fin can to float above the payload and the possibility of interference once the chute opens and it and the shock cord must pass the open main and fall to its proper position below the chute.

Many times this is what causes a problem. The Main opens, then bam....... something falls into it or over it, collapsing the chute and crashing the rocket.

These types of rocket designs almost always require some type of drogue to slow the payload descent enough that it remains above the fincan avoiding any interference.

The amount of wind on any given day, weight of rocket and even motor flown can all effect how the rocket will fall.
The same rocket flown drogue less with a smaller motor, may drop with fincan above the payload causing problems.
But then fly the exact same configuration with a large heavy motor, and the added weight will cause the fincan to fall below the payload, where it belongs.

It's also the luck of the draw. I see many flights where the main deploys, and parts go flying by just barely missing or even partially deflating the main, but everything recovers fine.

I have found on some of my High Power rockets a large streamer is enough to slow the payload enough to keep it in the upper postion.

My 4in Mad Dog flies fine drogueless,
My Comp 4 the fincan will sometimes spin making the fincan float above, thus it needs the 8ft by 4in streamer to work right.
Little Dog DD drops faster and straighter with a 12in drogue than without.

Sometimes a droguless deploy will start out fine a wind shear will come out of no where and the fin can starts spinning, and it floats above.

My solution is to especially pay attention at the launch site for rockets that are the same or similar to your own and watch their descents.
I like to make my first flight on a rocket low enought that I can see all events and then make any adjustments to shock cord lengths and add a streamer or drogue if needed.

All my large and heavy projects use one, that's a given.

Sometimes a drogueless flight will drop with more sideways travel than when a small drogue is used, resulting in a longer walk.

You just have to tinker and adjust untill you find what's best for any given rocket you fly.
But remember...when using a streamer or drogue....you want it attached closer to the payload, [4-6 feet for me] to keep that section above the fincan, and there by preventing the 2 sections of the rocket from banging one another on descent.
Last edited: Apr 7, 2009

Okay, two questions for you drogue experienced ones.

1) How do you 'size' a drogue to ensure a quick, low drift but stable decent?

2) What did you specifically use (Sky Angle, Rocketman, Spherachutes, etc).

Viperfixr said:
1) How do you 'size' a drogue to ensure a quick, low drift but stable decent?
Click to expand...

That's a bit easier said than done -- the drogue for something with fins with a large surface area will need to be larger than one with itty bitty fins. Why? Because you need the drogue to keep things oriented veritically, and if the fin can creates as much drag as the drogue, it won't accomplish that very well.

That said, for the stuff I've flown, I have yet to need anything larger than a 24" Rocketman drogue.

2) What did you specifically use (Sky Angle, Rocketman, Spherachutes, etc).
Click to expand...

Just about everything I use is Rocketman.

TAC-9 and SkyAngle parachutes are similar but I'm fairly sure they're not the same.

Your drogue choice seems reasonable to me.

I decided to give a drogue a try. Julie at Spherachutes was most helpful and suggested a special/custom one called a "delta drogue" that was originally developed for underwater purposes. The one I just bought is a 36" drogue, but has the drag effect of a 24" or smaller 'normal chute'. I'll post pictures and give this new drogue a try next month with the first flight of my new BSD Thor4".

Spherachutes are great I have one of there custom made chutes that I fly in my 4x upscale Alpha.

Viperfixr said:
1) How do you 'size' a drogue to ensure a quick, low drift but stable decent?
Click to expand...

In my case, I sized the chute to provide a 15fps fall while under the weight of the nosecone section alone. For a 'true' drogue parachute - that doesn't separate from the main body - I might go with a fall rate of between 50 and 75 fps... but this is completely arbitrary.

2) What did you specifically use (Sky Angle, Rocketman, Spherachutes, etc).
Click to expand...

I have both a SkyAngle and a TAC-9 chute, and more-or-less alternate between them. They both work about the same.

B
"Single" Deployment Rocket. Questions from a newbie.

B
Won't the sled itself be pulled out of the e-bay during ejection charge ignition?