The Staple Model of the Hobby

Arguably the most recognizable and undoubtedly a favorite for many, the Nike Smoke has quite the heritage in research and hobby rocketry history. Would you consider it the Staple vehicle among yourself and fellow fliers? If any, should every self-proclaimed rocketry geek have one (or two or three) on his shelf?

I have yet to build either a scratch or a kit version and never really cared for the design. But like a good Scotch it has become an acquired taste over time and I recently stumbled across this kit:

To those more experienced, is this a good deal? Should this be on order or at least on the list? Are there better kit options out there? Looking to stick to a low-high-power kit. I may scratch a larger HPR version down the road, but I'd like to get started on a smaller kit soon.

I would consider the V2 the staple model rocket in this hobby. Like you, the Nike Smoke never really appealed to me. About a year ago I got in the mood to build me a Smoke but never have. I do have a V2 in my fleet though.
L

In terms of a model of a real rocket, I would agree with the V2 being first then the Nike Smoke.

Otherwise, I would say the Estes Big Bertha or Alpha is a kit that most have built, especially if you are one of the "elders" here that started in rocketry in the 1960's, 70's or even 80's.

The Belleville Hobby prices are good. If you are going to buy over $100 of stuff though, AC Supply has similar prices and free shipping.

I would second the Alpha.

For scale, I'd have to say the Saturn V, but only for those who deserve it.
B

Gotta be the Alpha, just because it's been around so long (at least in name). About half of the schools and Scout groups that launch rockets get the bulk packs of them... the other half get Vikings or Gnomes.
C

At first I thought Alpha as well, but reconsidered. Maybe this tweaks the question toward defining a modern-day staple - but I'd suggest the Der Red Max, based on it coming in several different sizes and thereby filling numerous flight goals.

les said:
The Belleville Hobby prices are good. If you are going to buy over $100 of stuff though, AC Supply has similar prices and free shipping.
Click to expand...

I have been ordering from Ron at Belleville for almost twenty years, he is a real stand-up guy!

I'm in agreement with some folks here having selected the Alpha and it's variants along with the Big Bertha. Have to thank Vern for these timeless classics. And K'Tesh stated the Saturn V as a possible candidate. This probably falls in the category of most kids "wish I could have" but never could afford it models. If you DID get one as a kid, you were clearly the envy of the lot. It simply had presence on the pad back in the day.

In the eighties and earlier, it always looked like the Alpha and Big Bertha were neck-and-neck. For my part, it was the Alpha, purely because I liked the looks better. To my mind, it looked more "rocket-ish."

As a "staple" , a basic or principal item, definitely the Alpha and Berthas come to mind (The Baby Bertha seems more common now than the Big Bertha). 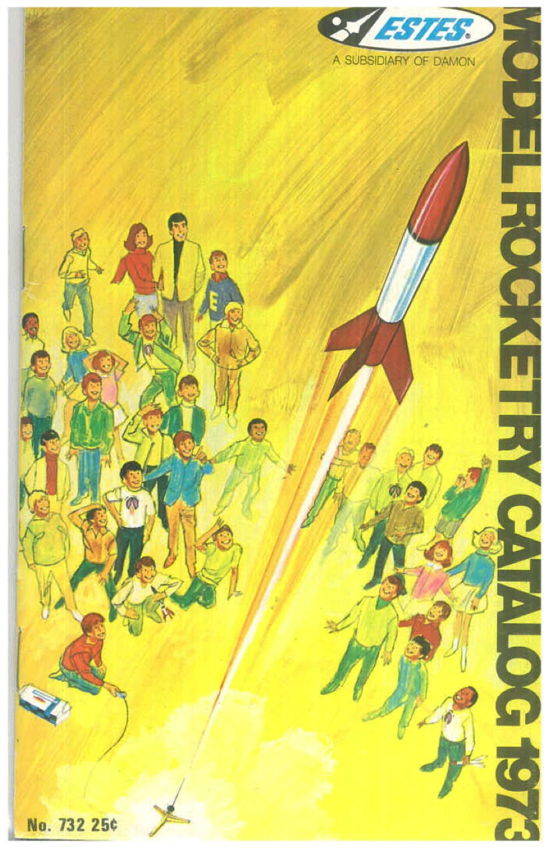 Oddly, my first "Bertha" was the Mini-Bertha. BT-20 diameter, 13mm Mini-engines that had just come out (Mini-Bertha was one of first three kits Estes produced for the then-new 13mm engines, along with the Mosquito and Screamer). 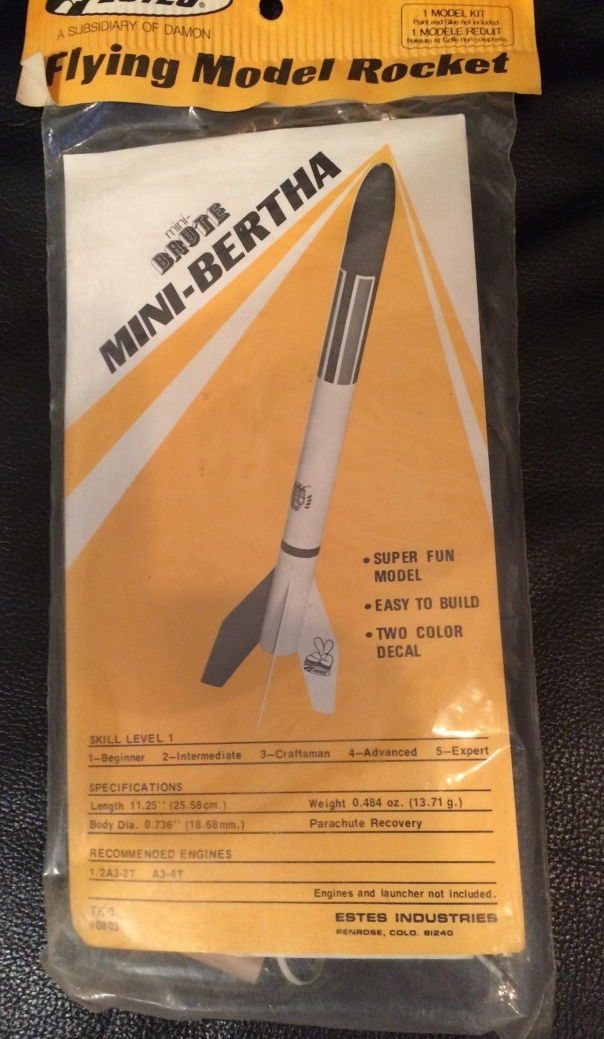 Had a Nike-Smoke, nice, but just do not think of it as "staple", even for scale. V-2 is mostly a staple. For a lot of early years, scalewise, the Aerobee 300 and Wac Corporal were, but those are long gone (as well as the MMI Aerobee-Hi which was THE kit in the early days.)

The Honest john could be considered a "Staple" scale model too. Estes and Cenruti both had kits of it, and Estes has had it in at least 3 different scales for at least 4 kits that I can think of, BT-50, BT-80, and now BT-60 (two kits decades apart, both BT-50 based).

However, since my first "scale" model (5th overall once I got started) was a Little Joe-II, the 1/100 Centuri one, I'll toss that in. At the time, to me and probably a lot of other rocketeers who bought one, it was the "affordable Apollo rocket" they could buy, compared to a Saturn, and easier to build (Well, the Centuri one was, I never tackled the wooden dowel towers of the Estes Little Joe-II). I even had a Cox all-plastic RTF Little Joe-II at one time.

My favorite kit, ever, is the Interceptor. But do not think of it as a "staple" since it was not as widely built and flown compared to the Alpha and Berthas.
Last edited: Aug 18, 2017

Funny thing is, I've never had a desire to build any of the models listed so far. They're just everywhere

Nytrunner said:
Funny thing is, I've never had a desire to build any of the models listed so far. They're just everywhere
Click to expand...

It's not about favorites, it's about the most often built and flown models for the last fifty or so years. The fact you say they're everywhere is a testament to their popularity.

Steven said:
It's not about favorites, it's about the most often built and flown models for the last fifty or so years. The fact you say they're everywhere is a testament to their popularity.
Click to expand...

No arguing that. Then there's the odd one like me that goes "Well, there's plenty of these around. No need for me to build one!"
B

Didn't know you was revering to a "staple" rocket then most definitely the Alpha,
that is the Alpha with balsa fins not the plastic fin can version

Apparently I am behind the times! It seems as though the consensus for most historically recognized is an Estes kit, the Alpha. I'll look into it! I went ahead and pulled the trigger on a PSII Nike Smoke, however, and look forward to having it on the wall. I think my local Hobby Lobby may have an Alpha kit?

I'm a little surprised that such a simple, small, seemingly insignificant model would have such a profound and lasting effect on the hobby community. I'll have to throw one together just to say I have one!

Brain and brain, what is brain!?!

I'm a little surprised that such a simple, small, seemingly insignificant model would have such a profound and lasting effect on the hobby community. I'll have to throw one together just to say I have one!
Click to expand...

I wouldn't be surprised. Most every young rocketeer starts with a simple model like this, and so it has a special place for many. I'm sure that lots never go much beyond it.

That is why something like the Saturn V could never be the answer to your question. Too small a percentage of hobbyists have ever touched one.

There are a lot of iconic models but the ones with the most impact are the ones that the most kids built as a stepping stone into the hobby.

All IMHO of course.

The ones without a psych history, I would imagine

CORZERO said:
The ones without a psych history, I would imagine
Click to expand...

Oh well, so much for me being a model; guess you'll never see my smiling face on the cover of a rocket tome. :wink:

I used to dislike the Nike Smoke shape, but grew to like it over the years. I ended up doing my L3 with one

As for the "staple" rocket, I really like the Der Red Max, but I think the the Alpha is on top. For scale it is the Saturn V. YMMV.

OverTheTop said:
I used to dislike the Nike Smoke shape, but grew to like it over the years. I ended up doing my L3 with one

As for the "staple" rocket, I really like the Der Red Max, but I think the the Alpha is on top. For scale it is the Saturn V. YMMV.
Click to expand...

I found that there are a number of rockets that I didn't like at first, but then I come to love them.

the Trident, and the Goblin are prime examples.

Definitely the Alpha. In fact I just finished one for it's 50th anniversary of production.

Moving on to the PSII Nike Smoke, it is an excellent kit and at 30 dollars, I may pick up a backup for mine.

Had to think/sleep on the premise of this thread a bit. Anyway,yes, a $30 dollar PSII Smoke is a good deal, assuming shipping is reasonable. I think the case can be made for the Nike Smoke being a staple of the hobby, especially in the scale model sub-genre. It's an iconic shape and relatively easy to make a stable flyer in many scales. I'll venture to say that there have been current production kits available from someone almost continuously since the 1960's (but I haven't done the research). I think the op wanted to ensure a lively discussion wording the title the way he did. :wink:

CORZERO said:
it has become an acquired taste ...
Click to expand...

I think that's the key there, if you have a taste for the rocket, then you must acquire it.

I feel that the Mercury Redstone is a little more accessible than the Saturn V, as I was able to afford that one on my paper route income back in the heyday. I leaned more towards the historical space exploration subjects than the atmospheric research or missile genre, but Nike Smoke has really nice lines, and like the Honest John, very distinctive fins that make for an interesting scale subject.
M

In HPR for scale rockets you see a lot of Nike Smokes. The nose cone is the distinctive part, it can be bought, and rest is a simple tube and fins.
The V-2 in all sizes is are pain due to the boat tail. Saturn V's are cool but very rarely seen.

My own experience is "atypical".

Most of the models mentioned so far I would agree are staples, or at the very least "classics that everyone should build". However, I myself have never built nor flown a Nike Smoke, a Big Bertha, a Der Red Max, a V2, a Saturn V, an Interceptor, or an Honest John. Nor do I have any interest in any of them. I agree they are "staples", and more power to anyone who builds and flies them....they just ain't for me.

In fact, my return as a BAR to rocketry was - you guessed it - an Alpha. And that rocket become something of a good-luck-charm from that point on. For a long time, I started every day at the range with a launch of my "trusty Alpha", sort of like a ritual. And then I retired it, but it lived in my range box and continued to at least go with me to the range EVERY time I flew.

My vote absolutely goes to the Alpha.

Over 49 years in and out of rocketry, I've built probably a dozen Alphas.

I think I have 4 in my current fleet. Pretty much every time I fly, i send up an Alpha on an A8-3 as a sounding rocket to get a grip on field conditions.
You must log in or register to reply here.
Share:
Facebook Twitter Reddit Pinterest Tumblr WhatsApp Email Link