The Lawn Darts Player's Club... Who's In (The Ground)?

Ok, I started the Goldfish Club for those of us who've got soggy rockets... What about those who have had a shovel recovery?

I've had two, and witnessed two more.. Mine were innocent, as was one of my witnessed LDs. The other was a deliberate act by a psychopath. Oddly, all were flown in the 1980s-1990s from the same field at Ashland Middle School (Ashland, Oregon)(two on the same day).

Both of mine were second stage failures. One was an Estes Warp II that was either a stock build, or had a redshifted booster (18mm changed to 24mm). I had it all painted up, decals looked good, flown it several times before the sustainer failed to ignite, and I was inducted as a member of the LDPC. The other failure was a modded Estes Magnum Payloader. The sustainer's fins were modded to appear as if they were part of the booster's fins. It too, was painted (though the blue was wrong), and a veteran flier. Like the Warp II, the sustainer failed to ignite, and I had to pull it out of a neighboring field's garden patch.

The innocent LD I witnessed was built by Bill Oakley, and was a fairly well done Estes Space Shuttle Columbia (1385). Bill's rocket was launched as part of my very first launch event (Dr. David Deller's Science class launch in 1983). It was launched vertically, but arched over, and impacted before the ejection charge went off. The ejection charge blew the motor mount out of the back of the rocket after impact.

The psychopath was one of the people who bullied me, and the school's bad boy, Kevin Kelso. I remember him as being older than the rest of the class, having been held back a year after being expelled for biting the heads off of some ducks on the campus the year before. His rocket was a very well done Estes Nova Payloader (1960). Launched at the same event as Bill's Space Shuttle Columbia launch, he had sabotaged his rocket by removing the parachute and shock cord, then he superglued the nosecone to the body tube after passing Dr. Deller's RSO/Launch table, and getting his motor. Dr. Deller was trusting at that time, and didn't think to check the rocket before it went out to the pad. The launch before his flight was a beautiful flight and recovery by a boy that I think was named Glen(n?), and a group of boys was clustered him, congratulating him on the flight. While he was packing his parachute, and enjoying the adulation, Kevin's rocket was put on the pad, and launched. I watched the launch with the awe of seeing a good looking rocket (much better than my Spin Fin) sail upwards with a streak of smoke trailing behind. That awe, turned to fear in an instant for both Dr. Deller and myself as we realized that there was no ejection event.

We started shouting for people to look out as the rocket was coming straight down. The boys around Glen heard the warning, and scattered. He must have been confused as suddenly he was abandoned by the guys... I remember that he looked at me and the teacher yelling at him to look out. He looked up, saw the rocket, and fell back on his ass. The rocket materialized between his feet milliseconds later. I remember seeing the grass recovering from being stood on as the Nova stuck out of the soft lawn of the playing field. Dr. Deller pulled the rocket out, and was said that it was strange that the nosecone didn't stay in the dirt when he pulled it out... Then he tried to pull the nosecone out, and couldn't. He tore the rocket apart near the transition, and no parachute was found inside. He then peeled the remains of the body tube off the nosecone revealing the glued joint. He then grabbed Kevin by the ear, and marched him off to the Principal's office. Kevin got a two week suspension from that event.

A few years later, Kevin died after being thrown from the back of the pickup truck he was standing in the bed of, as it rounded a corner, tossing him on his head. He waived off medical care, but was dead from a subdural hematoma hours later. I use his case to advocate that school launches should always have two adults present to prevent a repeat of the events that day.

So, those are my stories...

Estes Ventris on a F22 FJ single use with 7 second delay which was way too long for this one and a wee bit underpowered. She is rebuilt and stretched a tad. 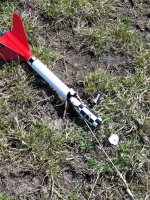 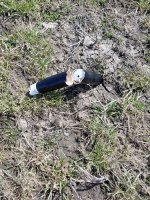 Our Montana club has a perpetual trophy for ballistic recoveries. You have to put your name and date on the base when you become the latest recipient. The trophy is a plastic nose cone that accordioned on a previous lawn dart.

DEmery said:
Our Montana club has a perpetual trophy for ballistic recoveries. You have to put your name and date on the base when you become the latest recipient. The trophy is a plastic nose cone that accordioned on a previous lawn dart.
Click to expand...

Some of us have signed it multiple times. Dale built the “trophy” but I supplied the accordioned nosecone.