I am working on designing a modular / swappable cluster motor mount setup. Has anyone done something like this? Looking for any general feedback but especially would like ideas to do something similar but working around through-body-mounted fins / fin tabs?

You can hopefully see my initial design below (big clear tube is airframe, dark brown tubes are motors, blue parts are removable cluster mount, gray parts inside tube would be fixed in place). Basically you load all your engines into an engine block + rear retainer and slide the whole cluster into the rocket. The front cluster block fits into an internal airframe block in the front and the whole thing quarter-turn twists locks into place in the body tube. I have done something similar with a single 24mm engine. Have not yet tested with a cluster so change that the ejection charge blows the cluster out the rear of the engine). 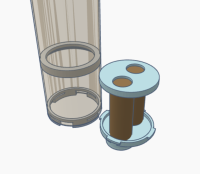 This is a version for BT-80 tubes and have made options for 1x 24mm, 2x 24mm, 3x 24mm, and 1x 24mm + 8x 13mm. All the 24mm tubes can be adapted for 18mm (I figured out a way to make a D engine and A-C fit in the same length slot with an adapter by using beveled holes in the engine blocks). I also included options for using a stuffer tube in front of the cluster / single engine setup (the front cluster block basically just slides around the buffer tube when inserted fully.

Anchoring the Kevlar in an MD LPR rocket, and other motor mount issues
2