I know that BBCode in general supports subscripts and superscripts, but they do not seem to be supported on the forum here. Is that a limitation of XenForo?

In talking about specific impulse, for example, I've used smaller type as a substitute, and I've tried inline LaTeX, and neither is really satisfactory:

The symbol for specific impulse is ISP, which can be rendered as \( I_{SP} \).​
See what I mean? The smaller type looks better, not right, and that doesn't work for superscripts:

Let me check on it. 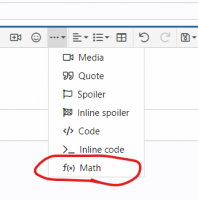 BB Code for superscript and subscript seem to be working now.

Well, that's one of the ways I was using, that didn't seem really satisfactory. It makes things inline look like this:

which is exactly the less-than-satisfactory result that led me to ask the question.


neil_w said:
BB Code for superscript and subscript seem to be working now.
Click to expand...

Uh, yeah, that does appear to be the case. I wish I had a screen shot of my OP to prove that it wasn't working, but it sure is working now. And I swear it wasn't.

Angie, are you messin' with me? Write the one answer in a post and quietly fix the other way when I'm not looking? Whatever you did, thanks.

It was not working. So I asked the tech to make it work for the forum, and he also made that math icon work. All for you.

The math icon already worked. And thanks again.

@jqavins Go forth and formula my young Formula master.

Usually remembers to get the pointy end up

Angie said:
Go forth and formula
Click to expand...

So, I use this, and LOVE it, but I just noticed in this post that if someone quotes you, the beautiful formula turns back into ugly LaTex. Is there an easy fix to this?

Kelly said:
So, I use this, and LOVE it, but I just noticed in this post that if someone quotes you, the beautiful formula turns back into ugly LaTex. Is there an easy fix to this?
Click to expand...

Hmm, that seems like a bug in the LaTex plug-in. I can't think of any reason it *should* behave like that.

I've also, since originally bringing this up, that for numbers and a few letters there are subscript and superscript unicode characters that one doesn't need any BBCODE or LaTeX to use. Look at the bottom rows of the second worksheet of the attached. so v² and x₁, x₂… xₙ are easy. (Though in Chrome for Windows I can't directly enter 16 bit alt codes; they're easy enough to type in Word then copy and paste into the message composition space.)