On Feb 6, 2018 SpaceX conducted their first Falcon Heavy test flight. They used Elan Musk’s red Tesla Roadster as the payload. You can view the actual launch here. And you can track the current location of the Roadster here. 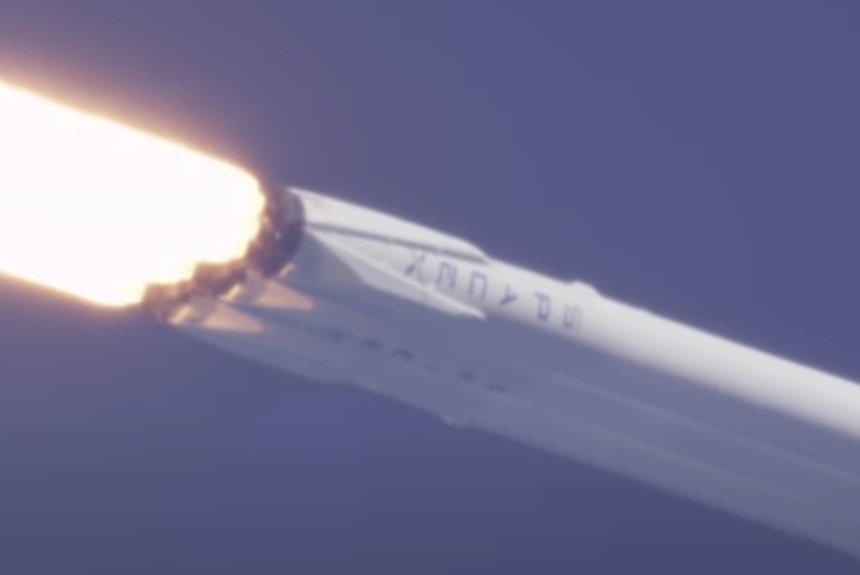 Here, I present my latest build (3.0) of this rocket at 1:90 scale. This is a three cluster, 2 stage model with booster separation at Booster Engine Cut Off (BECO), second stage ignition at Main Engine Cut Off (MECO), and a Red Tesla Roadster as the payload. This scale allows the use of BT-60 tubes for the core rocket and booster bodies and a BT-70 tube for the payload fairing. The design uses Estes E12-0 or D12-0 motors for the core, and C-6-0 or B6-0 motors for the boosters, with an A8-3 motor in the second stage.

It measures 78 cm high and weighs ~460 grams (without motors)

In the most recent versions of my SpaceX Falcon models, the landing legs extend for an attempt at upright landing of the boosters and core rockets. You can see how the landing looks at the end of this launch of my 1:65 scale Falcon 9 Crew Dragon.

This is my 3rd build of this rocket at this scale. With each build I have added new features and fixed problems with previous builds. Here is the history of my progression of this model:

Build 1.0: used a model Falcon 9 kit from SpaceX for the core, BT-60 tubes and parts from Boyce Aerospace Hobbies for the boosters, and custom made booster mounts and motors. Features included:

Build 2.0: In addition to the above, features include:

Build 3 (this build): In addition to the above, features include:
In this version, I corrected a number of bugs in the 2.0 build.

I plan to do the first flight of this model at that SARG club launch on April 23rd 2022.

Photo of (almost) all parts:

Close up of landing legs

Due to the character limit of this forum, I'll have to upload additional information about his build in a follow up post.

Table of all parts

Here you can see the lower booster section printed with black and white PET in the same part. At the nose cone, you can see the holes for the snap-in grid fin mounts and other parts. The motor tube is also shown with the magnets for booster attachment and separation. You can also see the four magnetic sheer pins that hold the landing legs in place.

Each landing leg has a small magnet in the end, which is how it is held upright until the motor ejects from the rocket during reverse recovery. Here I'm press fitting a magnet into the tip of landing leg.

Here this lowest section of the AXM paper skin has been applied: 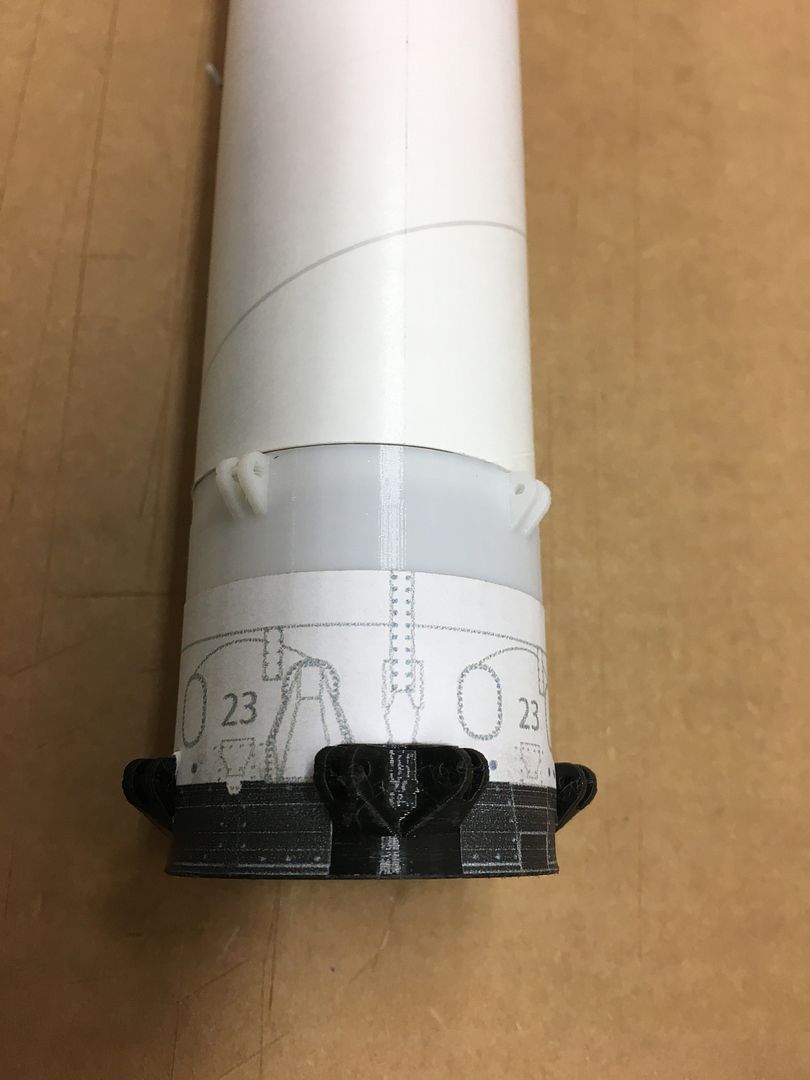 The paper skins are printed on self adhesive (sticky) paper

The skins act as "the glue" to hold sections together:

Close up of booster mounts with magnets

I was using electrical tape to secure parts together but found that it does not perform well over time.

Now I'm using gorilla tape that has been cut to size to get a much cleaner application. 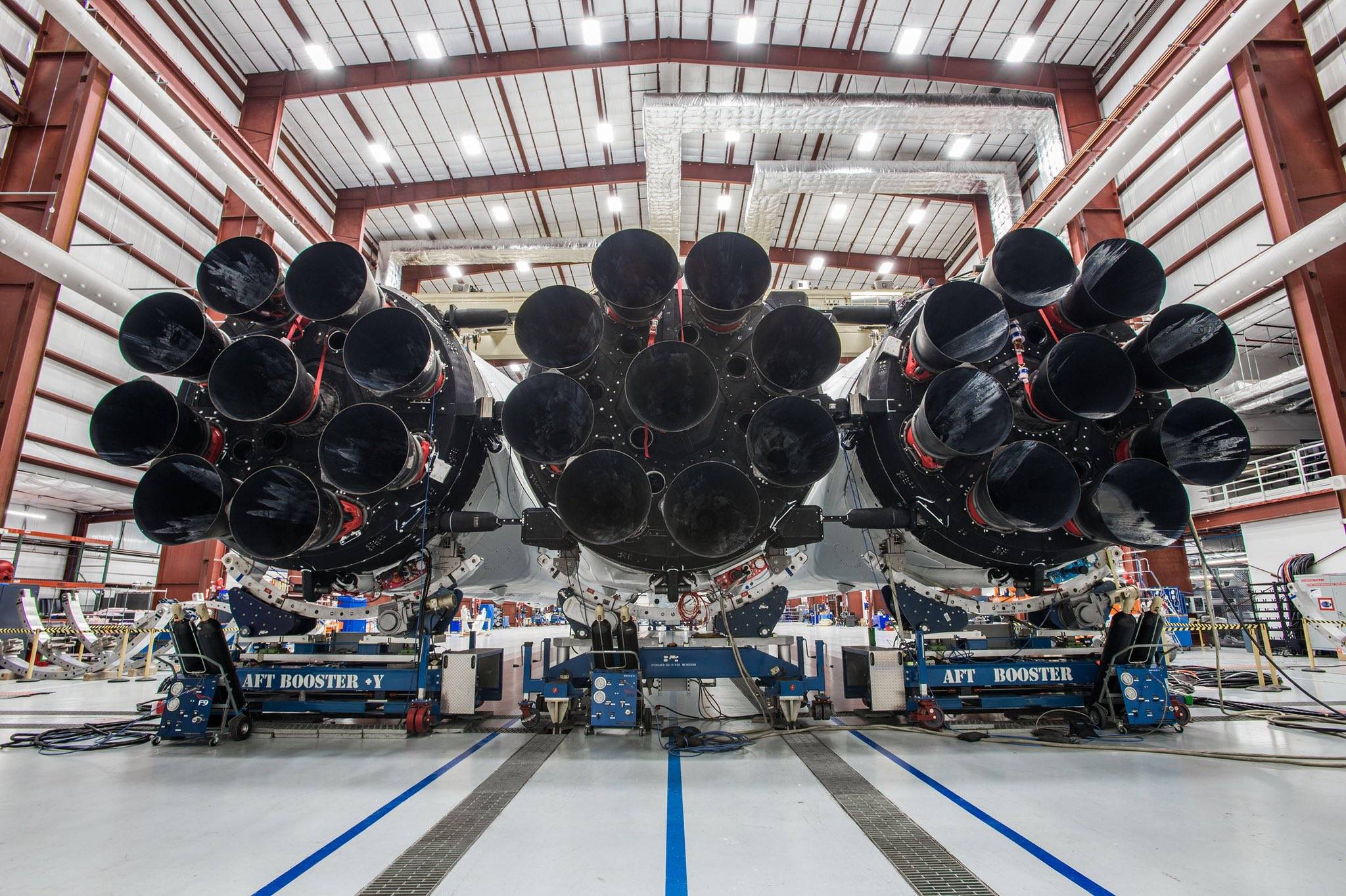 Time to prepare the Falcon Heavy for transportation:

So I designed and printed these mounts. 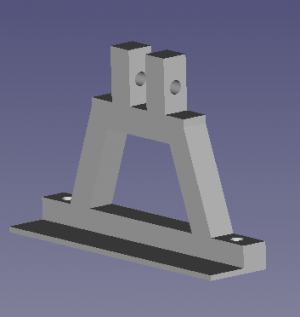 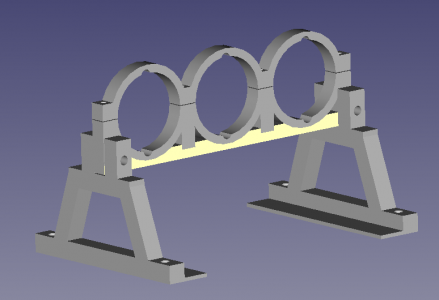 The base of the mounts has holes for fasteners but can also be secured using 1" adhesive Velcro strips.

Hopefully you didn't notice the white 1/16th inch shock cord I'm using to attach the recovery parachute to the nose cone area. Not until I pointed it out anyway. There's a loop of shock cord running under the grid fins of the booster in the foreground. And you can see it running between the engine nozzles on the left. Hiding the shock cord is on my short list for my next version of this rocket. In the next version, I think I can use 1/16" and 1/18" shock cord in place of the liquid hydrogen LH2 and liquid oxygen LOX fuel lines and almost completely concealed.
Last edited: May 19, 2022

Note that while the boosters can be fitted with D motors, I'm intentionally keeping the booster motors under powered so that I can observe the flight and minimize damage.

At first, things appeared to be going well. But the expected roll was followed by a pitch to horizontal and then things got worse.

Here is my breakdown of events:
Shortly after takeoff, the Falcon Heavy pitched to a horizontal flight path:
View attachment 519959


This was immediately followed by an unplanned right booster separation: 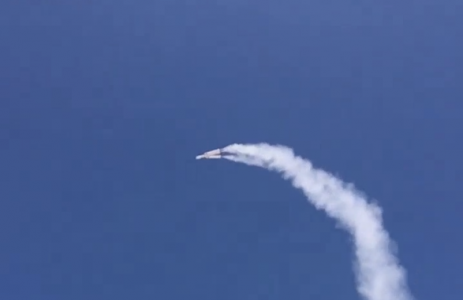 By this point, the right booster has flipped around with the motor still burning. 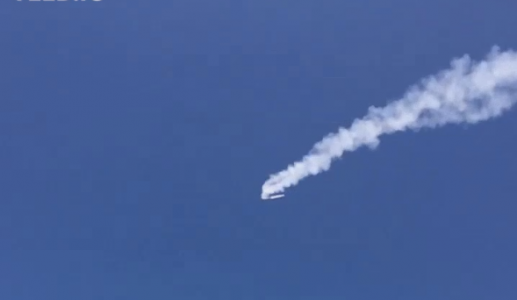 and then the motor is (finally) ejected from the booster (but not completely): 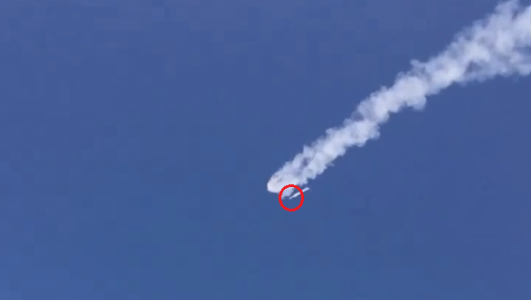 But now the core is also tumbling. Here you can see the core flying backwards and the motor ejection from the right booster never completes: 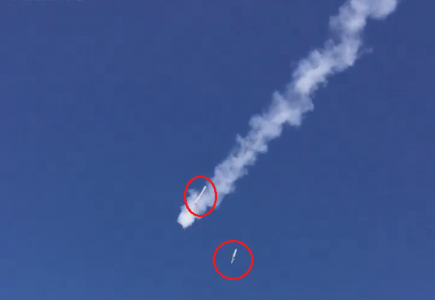 Now, after a complete flip, the left booster has separated and the core can be seen clearly with landing legs deployed but no revere ejection of the core motor: 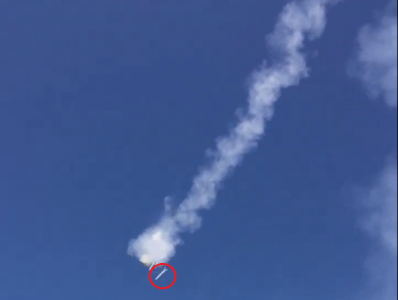 A lot is happening in that cloud of exhaust: 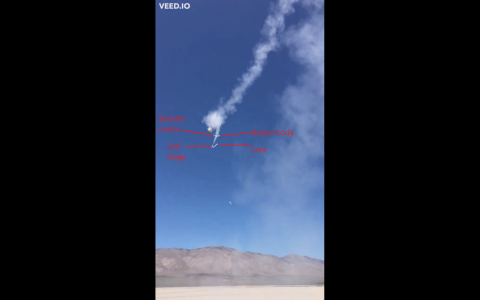 2nd stage ignition occurs but the core motor is not ejected. Meanwhile the left booster has ejected its core and recovery has initiated.

Now all of the pieces fall (LOL) into place. 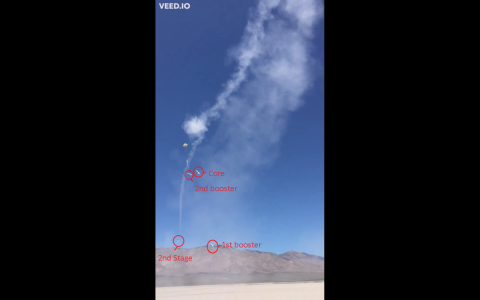 Lastly, we can see the 2nd booster recovery working pretty much as best that can be expected: landing legs down 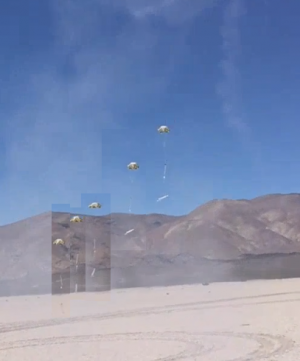 I'm learning to treat recovery of parts after these flights like a crime scene:

I'm pretty sure the 2nd stage ejection occurred on the ground but nothing was damaged.

So there it is.

FAIL or WIN (you get to decide):

Win
1: Successful ignition of all three cores
2: Successful ignition of the second stage
3: Both boosters were recovered with no damage and can be flown again with no repairs.
4: Despite the missing and broken parts noted above, this rocket can be repaired and flown again because the rockets can be disassembled by removing the adhesive paper skins and gorilla tape that holds them together.

Root cause analysis. Items 4 and 5 on the FAIL list are a result of items 1 - 3:
1: I think the unexpected pitch was due to the Red Tesla Roadster payload. I did not take care to make sure that it was centered in the payload fairing. My solution (for now) is to add a 3D printed mount for the Roadster to secure it in the nose cone as far to the top of the rocket as possible.
2: I think the right booster separation was a result of the rotation of the rocket to a horizontal flight path during flight. The booster mounts are designed to secure the boosters to the core when held upright. The entire rocket can be lifted by one booster in the upright position (previous builds required that two hands be used at all times). The booster mounts are also secure if the rocket is handled from the core in a horizontal position. But I think that the rotation of the rocket to a horizontal position caused the booster separation. Hopefully (if problem 2 is related to problem 1) both will be solved by improving the axial center of gravity (COG) of the entire rocket. Obviously booster mounts could also be stronger but that will require a new design of the booster mounts. I should not forget to mention a small problem that I ignored prior to this flight. I had added small magnets to the lower booster mounts and noticed that one of them was siding in its mount and allowing the right booster to rotate a very small amount on the center line. This would have been fixed with a droplet of superglue but I forgot to correct that before the flight.
3: I still need to do a tear down of the core and right booster to get a better understanding of the problems that occurred here. In general, this has been an area of focus and concern. I need to develop a more reliable way to pack the parachute and prevent it from shifting both during the acceleration of lift off and reverse ejection. I was discussing the problem with Steve (who attended the launch with his family) and we struck on the idea of using a clear tube for the rocket body to actually see what is going on there.

Special thanks to Wayne, Ron, and Jennifer from Rocketry Organization of Northern Nevada for making this launch possible.

If that video is 'real time' as it looks to be, then I do not think you had enough velocity coming off the rod.
The arcing over is very typical of too low a velocity then things keep going bad.

What does the Sim give you for launch speed off the rod?

In the video, the countdown is real time and the flight is 1/2 speed.