As a kid, I was always fascinated with the nosecone shape of the Honest John. I think I may have had an Estes kit back in the 1960's.

I decided to see if I could build a scratch-built 6" dia. Honest John. The first hurdle was the unique nosecone. I checked a couple of local woodworkers to see if they could turn the nosecone in basswood or something similar. The quotes for this 38" long nosecone, which changes diameter from 6" at the base to a maximum of about 8", ranged from $300 to almost $500. That was a non-starter.

So- I decided to try to turn- or rather to sand down- the nosecone from 1" thick concentric pieces of foam board. I would add some nose weight of BB's and epoxy somehow.

I had no lathe so I jury-rigged something I could use as a sanding lathe from some boards laying around, and used a hammer drill as the power source. My original thought was to sand/turn the entire 38" length at once, but the flexing of the 3/8" all-thread central rod made that impossible. So I decided to turn it in sections: the bottom 14" is pretty much straight from the 6" body tube to the 8" max. diameter; and the remaining 24" of the 3:1 ogive shape in 12", 6" (which will contain the nose weight) and 6" sections. I ended up using about a 32" section of threaded rod as the central turning point.

I laid out the 24" long 3:1 ogive curve on a 1" x 6" board, cut the curve, and epoxied 60 grit sandpaper to the curve. The trick would be to line up each of the three aforementioned 12", 6" & 6" sections accurately on the threaded rod so that the sanded curve would be accurate. I started with an 8" plywood disk as a template stop so that I would sand no more than the 8" maximum diameter. I then cut plywood disks of the minimum diameter of the previous section, to be used as a template stop for the next section's maximum diameter.

So far- so good. The only section left to sand/turn is the top 6" section. I needed a break, as so far this work took maybe 10 hours total- mostly because I didn't do a good job of locking the pieces on the central threaded rod. Every time they spun out of position, I would have to reset in order to keep the ogive curve consistent.rod. After the first sanding of the bottom 14 inch "not-curved" section, the sanding dust was so bad that I had to build a plastic sheeting containment for the sanding area.

DEFINITELY wore a dust mask during the hours of sanding. 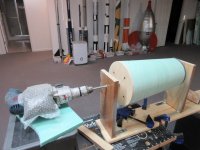 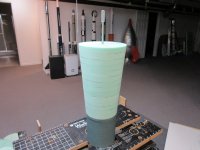 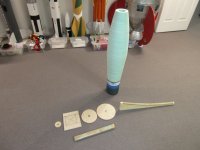 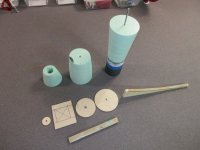 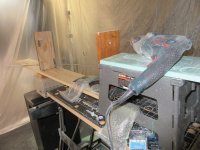 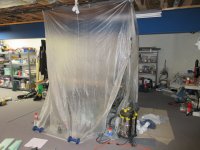 Always liked the Honest John too. How thick is the foam board and does it have a more specific name? 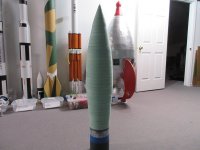 Still have to add the nose weight in the 6" to 12" section, add the rest of the 3/8" center rod, and epoxy the sections together, but the "dirty work" is done. After epoxying, there will be some minor sanding to smooth the transitions between sections.

Now comes the hard part for me- fiberglassing this oddly proportioned nosecone.

Since I've never done "fiberglassing for appearance" like this before- my previous fiberglassing experience was on projects that were quite large and forgiving and look "just ok" from 20 feet away (photos attached), any specific directions-step by step- would be appreciated!

Did you use the same method of foam and plywood to make the Marvin the Martian rocket?

For the Honest John nosecone- just the foam board with a 3/8" all thread "spine" down the center.

Added BB's & epoxy to inches 6 though 12 of the nosecone. It weighs about 6 1/2 pounds without fiberglassing. Will epoxy on the top 6" section & await the delivery of the fiberglass cloth.

Thinking about using 1/2" plywood for the fins. Will order the Blue Tube after the holidays, and have the 6" dia. body tube slotted for the fins.

Paint will be flat Olive Drab, with vinyl from Stickershock23. It will be ready to fly in the spring, but I already have too many new builds already lined up on the tarmac. 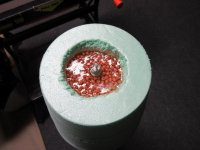 Stacy Worley, a fellow rocketeer from Kansas, 3D-printed the four spin jets for me. He does assembly of the Eggtimer products for electronically-challenged people like me, as well as custom 3D printing. FAST turnaround. https://www.facebook.com/stacykworley/about

I'll eventually buy a quart of flat white paint as a primer, and come as close to military Olive Drab as I can. I'll brush paint the nosecone, since it's winter in Ohio and I don't like to spray paint in the basement.

I'll order the 6" diameter Blue Tube when it's back in stock. In the meantime, the next step probably will be buying the 1/2" Baltic birch plywood for the fins. 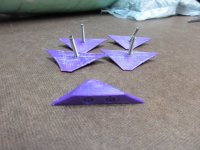 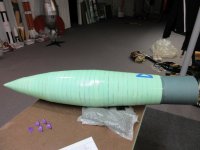 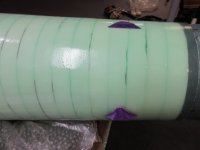 Delta Clipper was a fu build, and even more fun to see it fly successfully.

I see all you rockets lined up along the wall with each having it's own support container and just wonder.... how many years will it be till my kids would even begin allow organization like that (3, 5, & 8 now)....
Nice NC build by the way. Looks great.

jmmome said:
Delta Clipper was a fu build, and even more fun to see it fly successfully.

Tractionengines said:
I see all you rockets lined up along the wall with each having it's own support container and just wonder.... how many years will it be till my kids would even begin allow organization like that (3, 5, & 8 now)....
Nice NC build by the way. Looks great.
Click to expand...

And i have an upstairs bedroom with another 10 or so HPRs, including my 10 feet tall L3 rocket- in pieces, of course.

Chopped it up last year with the important parts saved, but building that one makes me think i can try for a 10 feet tall, 20" square at base, similarly shaped rocket- maybe in 2022. 6" dia Mercury Redstone & 6" dia. Honest John already in "nosecone" stages of construction.
You must log in or register to reply here.
Share:
Facebook Twitter Reddit Pinterest Tumblr WhatsApp Email Link