So, I'm new to the forum, but do have a pretty good model-building resume. I come from model aviation ... many complex scratch-built aircraft over the years. I got into rocketry a little over a year ago with my 10 y.o. son, and it has transformed my build bench (I can build 10 rockets in the time I build one airplane ...). I've devoured tons of literature, and now consider myself at least "moderately competent" in low to mid-power rockets.

I've recently become fascinated with the idea of building a flying model that would be the Saturn V Launch Abort System, truss and capsule. My "brain simulator" has become convinced it's possible, but there's no way I can really build this model in OpenRocket.

My back of the napkin calculations give me a 22:1 scale, using a BT-20 and some "off the shelf" nose cone for a total upper section length of ~18". I could probably build the truss from brazed piano wire, and the capsule using perhaps airplane building techniques (balsa and film comes to mind, but maybe even foam). Thinking I could power it with Estes mini T motors, but 18mm motors wouldn't be out of the question, but I'd probably want to scale up a bit for them to not look too far out of scale.

First, OpenRocket won't allow me to even build the airframe - no real way to build the truss structure. I could build the capsule, but useless unless I can connect it to the upper structure. Second, OpenRocket doesn't allow for simming canted engine clusters - I want the tractor design with the boosters in "the right place", which would require a 4-engine canted arrangement.

I'm not real concerned with absolute performance, but I want a stable design. My gut tells me that a tractor design with the bulk of the weight aft is inherently stable ... especially with a draggy capsule.

Anyway, I thought I'd throw this out there as a "brainstorming" session and see what you folks think about this model, and some good ways to proceed.

Also thinking about recovery. I could do a non-scale standard 'chute in the upper tube, ejected by the motors ... but being able to jettison the tower and allow the capsule to come down under a canopy would be cool ... maybe a streamer for the booster section.

This doesn't really need to be "true to scale". I think it's unique enough for "close enough" to be pretty cool all on it own.

Lots of info on this thread:https://www.rocketryforum.com/threads/apollo-capsule-pad-abort-test-vehicle.95119/

Awesome ... I'll check out that thread! Thanks for not flaming me for not finding it in search!

Sadly a lot of the attachments seem to be no longer in the thread. I'll dig through just the same and see what I can glean.

I think I remember seeing photos of a model like this from a recent event. Maybe the Expo flights from the TARC finals? It was a great looking flight. Made me want to attempt one too.

No problem. I was thinking of doing one using the capsule and tower from the Estes Little Joe II with MicroMaxx motors.
Here's a related thread. See Gus' post #5. Very impressive:https://www.rocketryforum.com/threads/functioning-les-launch-escape-system.147609/#post-1809017

This is all great info. Putting this all into background processing in my brain until something pops out ... probably in the shower, or while searching the tall grass for my hidden rocket.... 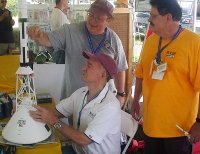 Looks like the Boyce one just has a single motor mount in the bottom though...

Both the current Boyce offering and the vintage Kosrox kit had single engine motor mounts. A canted cluster arrangement is much more challenging!
Here's what the older Kosrox kit looked like:
https://www.oldrocketplans.com/kosrox/apollo/capsule.htm

True, sorry to muddy the water.

Thinking About Building a Low-Powered Multi-Stage N-1 - Possible or Crazy?