I don't know of any past clubs at all. I wonder if the new location of the Shaver Shop (Hillside mall) would put up a poster for us...

If there are any changes to location, I will update on the form by September 20th.
I have spoken with the owner of the new BC Shavers Shop and he's going to help get the word out.
Last edited: Aug 19, 2019
H

If there are any changes to location, I will update on the form by September 20th.
I have spoken with the owner of the new BC Shavers Shop and he's going to help get the word out.
Click to expand...

Is this open to regular folks, My son, grandson and I would like to come and launch as well?
We live in Mill Bay.

Absolutely! Come on by.
H

Of course. I have 6 - AeroTech Fs if you need anything in the 29mm variety. So do you need a 1" rail or rod launcher?

hutch said:
I will be there! Any interest in a 1:100 scale Saturn V launch?
Click to expand...

Now I have to get the darn thing painted and decaled. This is the hardest part for me....

Do you have your own launcher?

Now I have to get the darn thing painted and decaled. This is the hardest part for me....
Click to expand...

If the weather holds off for Saturday, October 5th then we'll be good to go. Spoke with the construction company operating in the quarry area and as long as they aren't operating then its golden. TriX doesn't operate on the weekend.

Allandale launch kick off will occur in Colwood BC, at the old Allandale quarry location at noon on Saturday, October 5th. We have 12 rockets launching on a variety of motors. So far, the weather is forecasted to be promising for a launch. If you are in area, please feel to stop by.
H

Saturn V not ready yet - no time this fall to work on it....

But I do have some other models ready to go - Little Joe II, Interceptor E, maybe a 1:10 scale Black Brant IV.

Ready to launch. The weather is improving today and we'll have the right conditions today.

TC has issued a low ceiling alert stopping all launch activities. The forecast has been upgraded and the weather is too unstable for what is required for the launch.

My appologies for the back and forth information.

No worries - I was wondering about the low clouds. Hopefully soon!
H

Rockets that never made it to the launch! 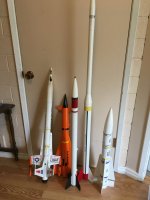 I hope this works...

highflyer1968 said:
Hey where in the interior are you?

im in Kelowna and still looking for a spot to fly. maybe early summer or into September is a good time to fly around here.

I had a spot a few years ago outside Kamloops that I was flying. Had permission to be on the ranch land

Hi I’m new to Kamloops and am getting back into low power rocketry. I live in Aberdeen just a short distance from this area. A guy I work with said this would be a good place for launching. Any ideas as to how I can contact the owner of this property for permission to fly? Any info would be greatly appreciated!

^I'd love to get out to that spot. Rancher's can be a fickle lot. Some will tell you to fly at 'er other's will get mad you even asked.
R

Any action happening in B.C. lately? I'm in Vernon but can't find anyone else in the area into high or even mid power. I've always traveled to Alberta for rocket launches but would love to find something a little more close to home.

The TriCities Rocketeers launches are about a 6.5 hour drive south of you right outside of Pasco, WA. Granted, there is an international border to cross!
Last edited: Apr 11, 2022
H

Nothing organized around here. I might have a spot to fly for myself and a few others at Campbell lake near Kamloops. Its All range land. Called the guy that owns the land in 2020 and it was a no as he had a lot of cows around there and he said they seem spooked for some reason and didnt want them spooked more. Wildfires last year so didnt even call. I will be calling this year assuming no bad fires.

Looks like a good location. I'm heading to Edmonton July 16, 17 for a launch/contest there.

Hard to find a spot on Vancouver Island. I think Midpower madness had a launch area in Langford, but I think he lost that last year.

gwh said:
Is anybody out here?
Click to expand...

I just was requesting that you post some more pictures of the rocket used in your avatar for us.

Hello fellow BC rocketeers! I considered starting a new thread, but then assumed I might get more attention piggybacking onto this thread.

I've recently gotten back into model rocketry after a several decade hiatus, ha! Funny how life works! I live in North Vancouver, and unsurprisingly, it's not exactly a launch-friendly area. A few years ago, I joined in a group launch run by some of the members of Fraser Valley Rocketry Club, but it seems that group isn't really functioning publicly anymore. I have a few spots that I use for low altitude stuff, but looking for a bigger spot (as it seems we all are in BC!).

I'm at the point where I would even consider striking out on my own and starting a local rocketry club if it opened doors to launch sites. I'm a father now, and really enjoy sharing this hobby with my daughter and other people in general. I'm certain that launches would have to happen in the Fraser Valley, but just wondering if anyone has any tips or info for someone in my position? I.E.: What's the best way to approach land owners for permission to launch? Ideally, I'm just looking for somewhere safe to launch some bigger rockets. I just finished building my first "true" mid-power rocket - a Madcow DX3 2.6". Really excited to fly this thing, but not excited at the thought that I may have to travel to Alberta to fly it

I see lots of suggestions of going into the U.S. for launches, but in the interest of minimizing uncontrollable variables, I think I'd prefer to stay on this side of the border.

Seems most of the contributors to this thread are either in the interior or on the island. Anyone here local to lower mainland? I am thinking of doing some trips to the interior this spring / summer and hoping to bring some rockets along as well.

I hope this works...

Hi everyone. I do LPR at a few city parks in Kamloops when I have the time. I will keep an eye on this thread if others in the area want to connect sometime and do some launches.

Where to fly? Ontario