Rocket names that beg for problems

"Two out of three ain't bad" - A three-motor clustered rocket named in tribute to that great American philosopher, Meatloaf.

A few years ago, another TARC team in the area had a rocket they named "Inferno". Sure enough, they missed a step in assembly of the reload and had a CATO with fire coming out both ends. AKA a "flaming pinwheel of death".
B

My Cert 2 bird the Reckless Endangerment.

Goes well with the t-shirt: Filthy.Stinking.Rich. two out of three ain't bad.

I shipped my pants.

Brought rocket to fly. Forgot to bring the right size z-clip so I had to fashion a substitute. Parachute was on another rocket---at home---as was the Nomex chute protector. Found a chute but too large, had to cut a big hole. Dug around and finally found the container of dog barf.

prfesser said:
Found a chute but too large, had to cut a big hole.
Click to expand...

No need to ruin a chute for that reason. Just reef the lines, masking tape forcing the lines to be short enough that the chute does not inflate to the normal diameter. Then the masking tape can be removed later and the chute just like it was before.

Forgot on a previous one. When my younger child started out in rocketry, she decided to name her rockets after Star Trek ships, preferably ones that met terrible fates.

#2 was a scratch build named the Kobayashi Maru. It was designed based on the usual fin sizing rules of thumb, and I think looked fine in OR but something went haywire* and it was unstable off the pad. It skywrote beautifully about 100 feet up, then fell in a flat spin, popping the ejection charge directly at the crowd at eye level. Definitely a memorable flight.

After that, rockets were named after starships that did not meet terrible fates.

* It had a high L-D ratio, so it might have fallen afoul of long skinny rockets needing more calibers of stability
Last edited: Dec 7, 2021

"piece o crap"
Not again
oops
and
Heads up flight

Many years ago…I think back in the late 80s, Estes made a very small rocket and named it “Zipper”. I believed they renamed it something else in their catalog a year or two later when I was doing a search for it. I actually built one….it had the inverted swept fins like the Dasher and others. 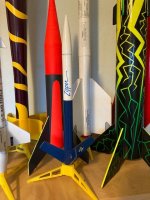 My L2 rocket is called Kryptonite.

Suggested in a similar thread some time back. Agrajag. If your name happens to be Arthur, probably best to avoid using that name for a rocket.

I call this one "Thud"

Then there's my avatar, "The Flying Basket of Death and Destruction"

One year my USLI team named their sub-scale rocket, "This Will Definitely Work This Time."

"Hold My Beer"
"Watch This"

What Could Possibly Go Wrong?