Many people (including my wife) have asked me how much the boat costs. At first I faithfully kept receipts so I could track the projects cost, but I never had enough nerve to actually add them up, and finally I just stopped keeping them. The experience is priceless, and as I tell my wife, the reason I have a career as an engineer is because I do projects like this on my own time.

SeaCharger uses off-the-shelf electronics as much as possible. The brain of the boat is an Arduino Mega, the GPS is from Adafruit, the satellite modem is from Rock7, the compass is from Devantech, and the battery protection/charging circuit is from AA Portable Power Corp. A typical R/C model-style brushless motor spins the propeller and an R/C servo turns the rudder. In terms of reliability, I dont worry too much about the electronics, but I do worry about the motor and the servo. Water is not the problem: the motor transfers torque to the propeller through a magnetic coupling, so it stays perfectly dry. And the servo has its own custom-made enclosure with rubber shaft seals to keep water out; this enclosure was designed and built by friends of mine, and I trust they got it right. But the bigger issue is the time required to get from California to Hawaii: the motor will have to run almost nonstop for over a month, while the rudder servo will have to complete 23 million cycles.

Made it from CA to HI. Now on its way to NZ.

The Spirit of Butts' Farm

The Spirit of Butts' Farm (also known as TAM 5) was the first model aircraft to cross the Atlantic Ocean on August 11, 2003. It was recognized by the FAI as a double world record flight for its duration of 38h 52 min 19 sec and straight-line distance of 1,881.6 mi (3,028.1 km) using an autopilot, and using the Argos System for telemetry to track the flight's progress; the team's use of technology also spurred the FAI to create new record categories. The aircraft was controlled by autopilot for >99% of the flight in a manner similar to that used by the Insitu Aerosonde UAV "Laima" that crossed the Atlantic in 1998. The flight used 99.2% of its fuel and left only 1.5 US fluid ounces (44 ml) (or 44 minutes of flight time) remaining when it reached its destination. 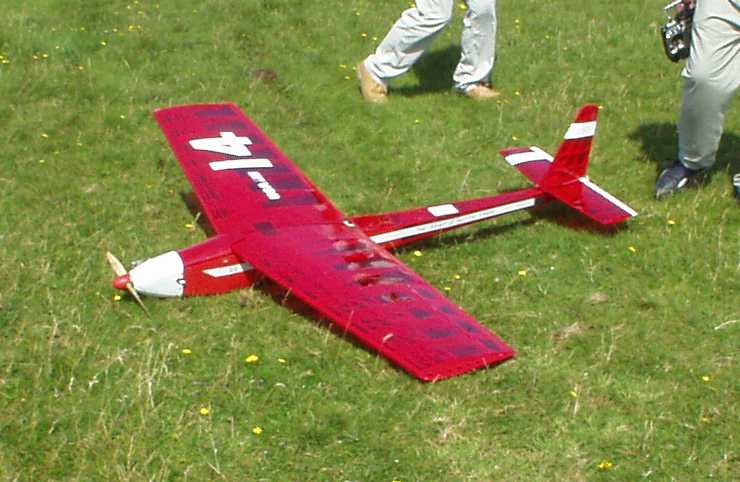 I think the R/C plane used a diesel hobby motor and a prior attempt was lost at sea. One team launched it and the other was on the other side waiting to pickup local control and manually land it. Kurt

ksaves2 said:
I think the R/C plane used a diesel hobby motor and a prior attempt was lost at sea. One team launched it and the other was on the other side waiting to pickup local control and manually land it. Kurt
Click to expand...

When we began to make serious attempts to fly the Atlantic, the particular planes selected to fly were redesignated, beginning with TAM-1. TAM-1, TAM-2, and TAM-3 were launched in August, 2002.

TAM-5, the fifth of the planes intended to fly to Ireland, was originally #25.

If I lived near an ocean, I might want to try something I thought about the last time I heard of some message in a bottle being found: a solar powered message in a bottle, actually in a wide-mouthed plastic jar (peanut butter) with buoyancy to float upright with most of the jar underwater (to avoid internal solar overheating); solar cell on the lid, properly protected from salt water; one of the tiny Arduinio modules to control daytime charge of a single cell lipo, going into low power mode at night, and constantly looking via accelerometer inputs for a sign that it had landed somewhere; once that landing is sensed setting off an slow cycle time led strobe at night; written message (email address to contact, release location and date, etc.) would be inside jar lid; aquatic life attachment to the jar over its the journey might be an issue, gradually submerging the unit, but I recall reading somewhere about a coating intended to prevent that. Of course, the chance that it could lure someone through curiosity into some hazardous situation might be a deterrent against doing this since the typical message in a bottle is only found if it's in an easy to access location, like lying on a beach.

You should consider some protection from pirates and drunken fishermen. Furthermore, a shark can bite off a piece of solar panels

My dad found a message in a bottle on a beach in South Louisiana during one our surf fishing trips. A couple released iit from Cancun in February and my dad found it either July or August. Pretty neat.

MikeyDSlagle said:
My dad found a message in a bottle
Click to expand...

Was there a pirate treasure map? Where is this Cancun ,first hear it, somewhere in France?

SaturnV said:
Was there a pirate treasure map? Where is this Cancun ,first hear it, somewhere in France?
Click to expand...

Sadly no treasure map.
Cancun is in Mexico, on the Yucatán Peninsula that kinda separates the Gulf of Mexico and the Caribbean Sea. Very popular tourist spot. Never been there myself though.
Last edited: Aug 31, 2016

Wednesday at 11:28 AM
sambatterman
S