Picked up this launch set as I was in AZ and didn't have any of my gear with me and we promised to take the nieces out to fly. This kit came from Hobby Lobby. The rockets come preassembled but they are anything but ready to fly.

The HiJink is an Alpha 3 with a longer nose cone. Otherwise the body tube and fin can are the same. A quick inspection of the HiJink found the shock cord loose. A minor pull and it came out in my hand. I looked at the fin unit and it could be wiggled around. A little wiggling back and forth and it came loose from the body tube. Since the rocket was basically disassembled, I took the time to create a thrust ring for the top of the motor mount. I cut a strip of cardboard from the side of the pack of engines we purchased and rolled it up and glued in it place as a motor stop. Added a little bit of CA to the outside of the motor hook to help keep it in place. From there is was a basic reassembly with thick CA. Added a Kevlar leader and elastic for shock cord and called it done.

Like the Alpha, this thing is a great flier. Very stable on any motor I cared to throw at it. Since we were out in the open we flew it on B6-4's and C6-7's. I think this was the Nieces favorite as we did 8 flights in 2019. I put it up 2 more time this Christmas and it's still a great solid rocket.

The Rascal had the same issue with the stock shock cord. A minor pull and it came out in my hand. Not an issue as it was getting replaced anyway. The fin can on this one was attached nice and solid. Simply replaced the shock cord with Kevlar and Elastic using a tri-fold mount and called it done.

The Rascal is another great flier. Since we had already flown other rockets that day on C motors we knew what to expect and went full tilt on this one. We started off right away with a C6-5 then C6-7's the for the remaining flights. Back in 2019 we flew this one 3 times. This year over Christmas I put it up 2 more time but unfortunately ran into a motor mount failure on the second launch. The engine hook came loose and allowed the motor to move up about 1.5 inched into the motor tube. The flight was unstable but the ejection popped before it hit the ground.

Damage seems minor. Some burned tubing inside the motor mount and a failed motor clip. I'm going to do some some repairs next time we head out there. Hopefully I can get that fin can off the body tube without cutting but worst case, I cut it off and shorten the rocket by an inch. 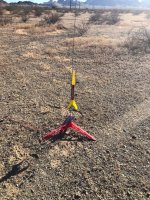 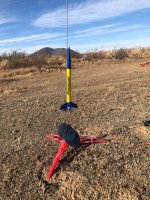 HiJinks has a half-inch longer body tube than Alpha III/IV (but the same length as Alpha VI). That extra half-inch is useful as the Alpha III is pretty tight for room for enough wadding without folding the ‘chute in thirds.

Try a hot hair dryer or a mild heat gun on the body/fin can joint to help get the Rascal apart. As you found with the launch lug/shock cord mount these seem to be put together with something like hot glue.

Interesting addition to the stock blast deflector there on your Porta Pad II.
B

Yes. That is the blast plate from the pro pad. We had both setup and I liked the way it angled the blast away from the rocket.

There was some grumbling in Alpha purist circles when the Alpha VI showed up with that extra length. I think it’s an improvement for the reason I mentioned before. Alpha III turns 50 years old this year, so there is some history, though.

Agree about the angled exhaust deflector. I’ve certainly seen cooked fins (and screw-on motor retainers) from the perpendicular-to-the-exhaust stream Estes blast deflectors over the years. Centuri had a better idea with the sort of flame bucket approach.