I know that this is a stretch, but does anyone happen to have a Public Enemy 4" V2 with 38mm motor mount kit laying around? A built model would do as well, but could be harder to measure. Bought one on eBay and it showed up finless...

The Rocksim file on Rocket Reviews appears a little wonky. The kit isn't truly to scale and I want to preserve the look of the original kit.

This may be closed in the most unlikely of ways...may have found a set of originals from PE!

Glad to have helped. Will send them out as soon as possible.

jd2cylman said:
Glad to have helped. Will send them out as soon as possible.
Click to expand...

A little out of round, but I think that can be sorted out as I'd love to use the original yellow paper tube unique to those kits. The tube stiffener that came with the kit is a little squished, too, but no big deal!

PM inbound with tracking info. And a surprise....

jd2cylman said:
PM inbound with tracking info. And a surprise....
Click to expand...

Many thanks Adrian. I'll put them all to good use, may even post a picture or 10...

Thanks to the generosity of Mr. Butler, I have a much better chance of finishing my Public Enemy 4" Vengeance V2 in the next decade! 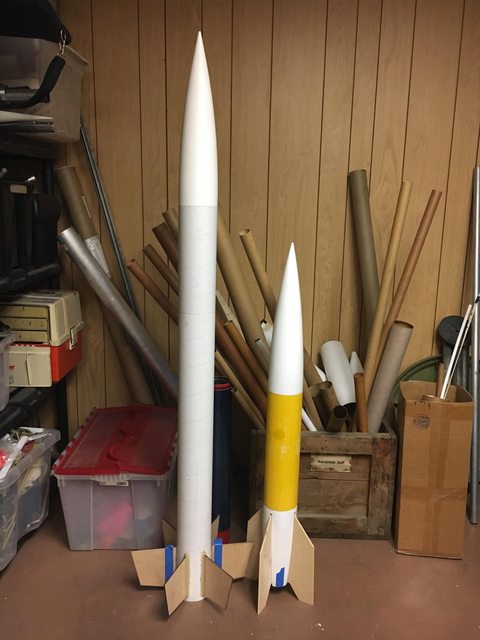 For more fun information about the kit, here's an archive link to the original web store: https://web.archive.org/web/20081202052550/https://publicenemyrockets.com/Rocket Kits/V-2.htm

Specs on all of their original offerings: https://web.archive.org/web/20040404072133/https://www.publicenemyrockets.com/specs.html

Cool story to end the post...my dad has and still flies his Public Enemy 4" Bull Pup that he attempted his L2 with at LDRS 23 (2004, Geneseo, NY). That was shortly after the unfortunate Aerotech fire and the J350W he used was one of the first ones made by Ellis Mountain for Aerotech while they rebuilt operations. The grains from Ellis were really soft and squishy and almost always CATO'd. The motor he's holding here immediately CATO'd, ejected the aft closure into the blast deflector and expanded the OD of the case significantly, jamming it in the motor tube. He had foamed the fin can, so a few minutes with a sledge and an iron bar forced the case out with little to no damage to the rocket. The rocket was used a few months later in Cobleskill, NY at CTRA-NARCONN to obtain his L2 on another J350W that had the cores drilled larger (another story for another day ). In the background you may notice his neon orange NCR by Estes Big Brute fin can that had been his L1 rocket at NARAM43 (2001, Geneseo, H128W). That rocket has been rebuilt so many times that I'm unsure what killed it that specific time. I know its first flight on an F22J (long before the L1 attempt) resulted in a similar outcome, and I know that the rocket was re-tubed after the crash in the picture...but I cannot recall the circumstances at LDRS. 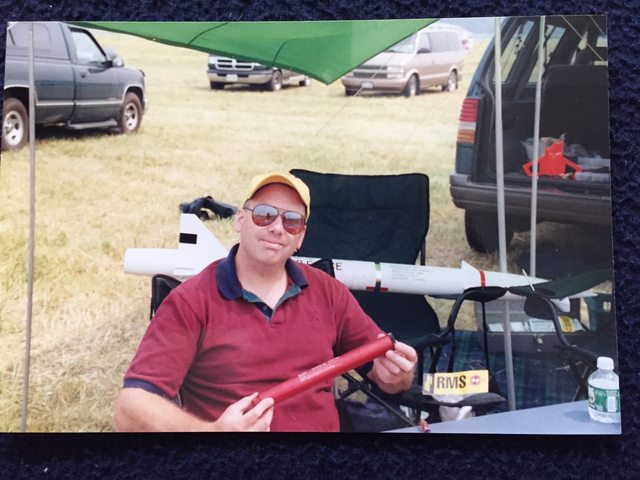 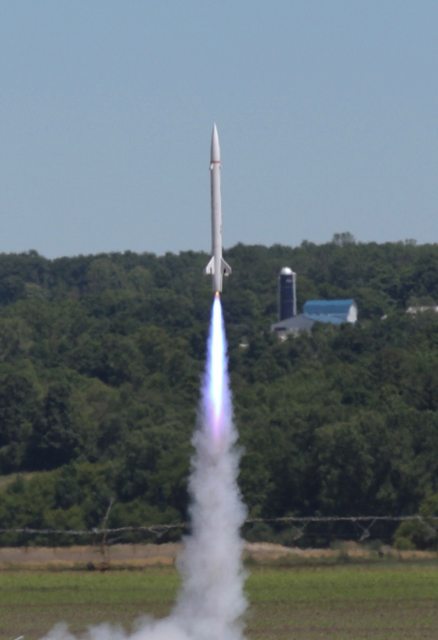