I can't believe this, but I may have actually found the tubes that would allow me to upscale the Cineroc and Omega to a 4" diameter rocket here in China. And they came (from all places) McDonalds. I might be building a McRocket! I was at the local McD's when they were changing out their displays, and they had some tubes that the stuff came in. I asked if I could have them, and they were happy to give them to me.

So, now I've got 3 tubes that are 4" OD, 3.8" ID, and 37" long. A 4" Omega needs 34" for the sustainer body tube. Along with that I scored a smaller diameter tube that is (approximately) .09" thick with a 77mm ID (there's some damage to the ends of the tube, so I'll have to cut a clean edge to truly know). The tubes are thick and kind of heavy, but I wouldn't be looking to push this design into orbit or much past mach 1 (if even that).

For the Cineroc, I've got that PVC pipe that is 4.375" OD. Upscaling a BT-60 to 4" would increase the diameter of the Cineroc to 4.398", that's really close... I'd need the nosecone, transition, and camera shroud 3D printed (perhaps a couple of copies of the nosecone (one for the look up, one for the look down recovery options)).

As I was creating and uploading the cutaway image, I realize that this would probably be easy to damage with a 75mm motor mount if the fins are removable. I'd need to build this as a 54mm powered two stage rocket, but I could live with a 75mm design rocket, but the fins would have to be permanently mounted to be strong enough to survive. I had been thinking of how I would be able to make the fins removable (for transport) for a while now, and came up with an idea on how to make the MMT removable. My more realistic idea would be to have this fly as a single stage 54mm rocket using an adapter that would link the "booster" and "sustainer" (which would also be screwed together).

I've got a question for anyone who's made a rocket with removable fins... Did you try to give them an external fillet (that was really just an extension of the slot? I'm thinking that I might be able to give the fins a wrap of teflon tape (should I be able to find it, then using epoxy putty to create the fillets. Allow the fillets to harden, remove the fins, and tape, and finish as normal.

Of course, as long as I don't have the RMB to buy anything, this is all just a thought exercise. Oh... a word about the fin slots, they would fit inside the body tube, but due to the limitations of OR, I had to make them flush with the surface.

This rocket in a 4" 54mm version would be glorious!

What Cabez said. 54mm for the win.

I agree, the 54mm powered version makes much more sense as I think about it... Here's a cutaway of it.

I'm now thinking about how I'd fly it, when I get to that point. I'm thinking about two different versions of a single stage. One idea is to fly it without the booster attached (just like you'd fly any other single stage rocket), and the other is to figure out a way to fly it single stage with the booster attached (firmly linked to the sustainer). Perhaps for a true two stage I'll need to extend the booster, and that could be done with an interstage coupler. As a linked single stage, I'm thinking that the coupler will need to be extended to contact the back of the sustainer's aft centering ring, and the front of the booster's forward linking CR.

I've never built a rocket that would be this complicated before. Wrapping my head around HPR staging is proving to be tougher than I thought. It's not a simple matter of attaching sustainer's motor to the back of the booster's. I'm thinking about how to control the ejection of the booster from the "Camera" AV bay, how to air start the sustainer, how to prevent the rocket from coming in ballistic if something goes wrong, and how to prevent the laundry from snagging on the electrical system's wires (connecting the AV bay to the motor).

I also may have found a way of making the 54mm motor tube using the tubes that I have on hand... I've got a 60mm (ID) tube, and a 66mm (ID tube) the 66 is 3mm thick... Hmmm 60-6 = 54... If I were to cut the larger tube down, I might have it. Then again I'm worried about the resulting ID of the motor tube, would it fit a 54mm motor, or be too snug (again peeling it might work). Would it be structurally compromised because I had to split it to take out the strip needed to reduce it (I don't think so actually, as the thrust plate would take the actual strain, and the 60mm ID tube could be used to reinforce the exterior of the new 54mm tube (at the exposed back end of the sustainer). Then there's the whole hardening issue. Can I even find wood hardener here in China?

Updated the file to use "decals" on the fins... deleted the old version. Haven't updated the image (above) though.

Here's a way people could help with this...

I need centering rings... LOTS of Centering rings (and bulkheads). I possibly could locally source them, if I only had a better command of Mandarin. However, I don't, and don't have a clue on where to even begin to look. I might be able to cut my own... If I had better tools, but again... $$$ and local language knowledge is in short supply.

One oddball thing about this is... I'm planning on building it so it can be dismantled for transportation/shipping. That means that I'd also need the walls for the fin slots (16 of them to be precise (8 per stage)).

As long as the CR/Bulkheads are ~5mm (or 1/4") I think they'd be able to be shipped in a padded envelope without much problem (or expense). I could also use some rail buttons (white preferred, but beggars can't be choosers).

Doug's got the Cineroc file already, but it may be some time before that's ready (3D printer issues).

Now for another look at the file... This time I'd say it's final (well, except for the fin decals (those are a royal PITA)).

Uploaded a new version using fin decals (now that I know how to use them, it's not so hard to do). Deleted the old version of the .ork (but left the old images (above)).

Alright... I've updated the previous post to include the .ork file for the "fly-as-single-stage" version of the Cineroc (with better measurements of the tubes I have on hand). I've also worked on the true "fly-as-two-stages" version. The major difference is the addition of an interstage coupler, which would house an AV bay and a recovery bay. It's not final though.

I've also managed to figure out the average color of blue from the decals, and adjusted the colors on the fins accordingly (you can see it the results in the previous post's 3D color image).

The fin decals are still a problem for me... I've tried in the past (and failed miserably) in trying to get them positioned, and look proper, and this still beats me. I need to print them again, and try to get them aligned properly on a fin template. Perhaps then I'll be able to figure out what I'm doing wrong. Until then, they're simulated with fins still (I'll update the .ork files thread once I crack the problem).

When I was working on the previous versions of the .ork file, I was tired, and resistant to using more phantom body tubes (I'm trying to move away from them). However, to get the fin slots right, I've decided (now that I'm rested), to go ahead and use them for the sim (it also solved another problem with the Aft Rail Button).
Last edited: Jul 25, 2016

Best Wishes for a GREAT FLIGHT !

I've actually seen those and done some work on them before. I'd caution you though about the purple. In my research, I've failed to see a confirmed Estes kit with decals that shade of purple.

This is my updated version of that dimensional drawing: 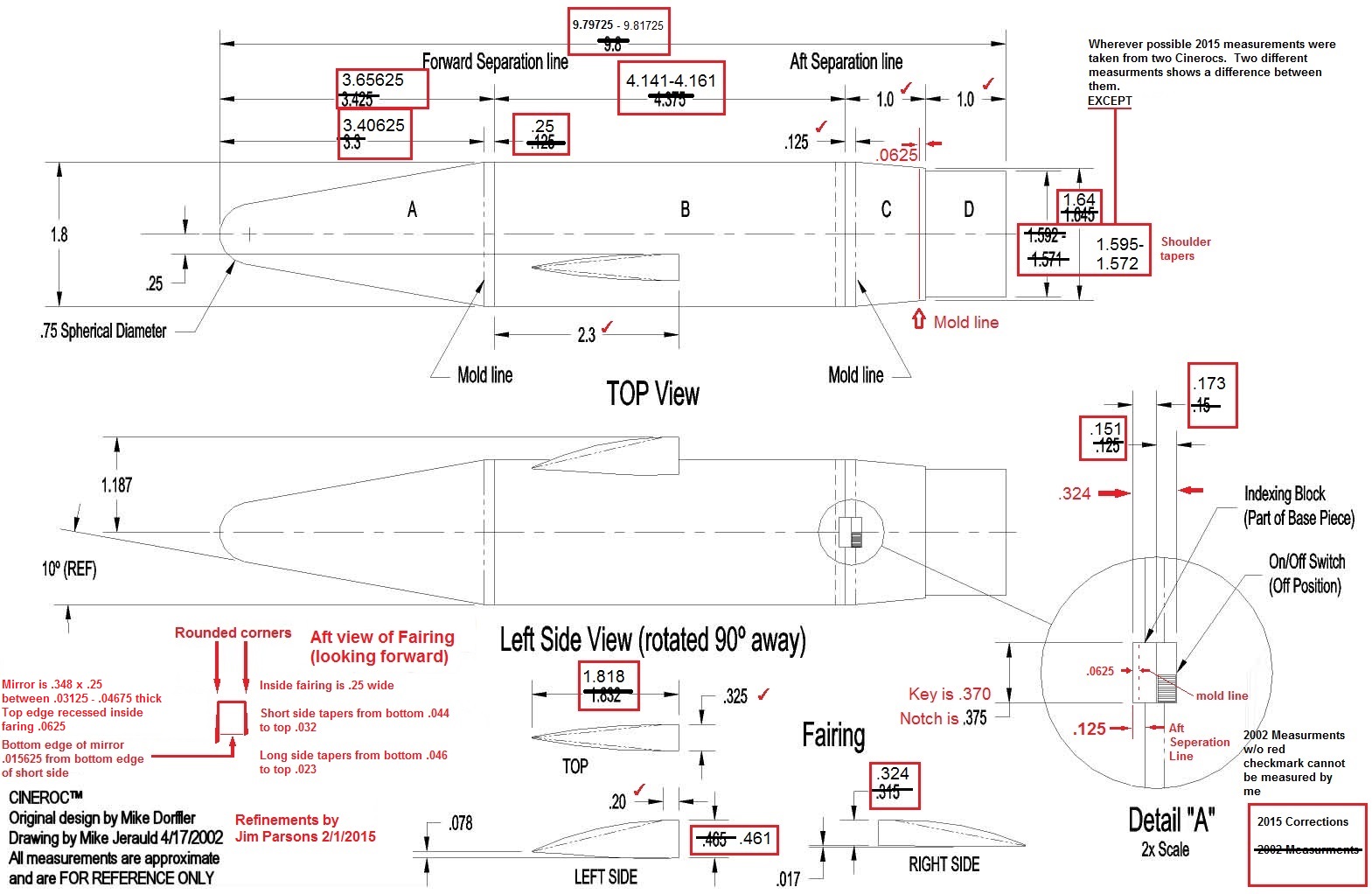 And my scan of an original Omega's decal sheets: 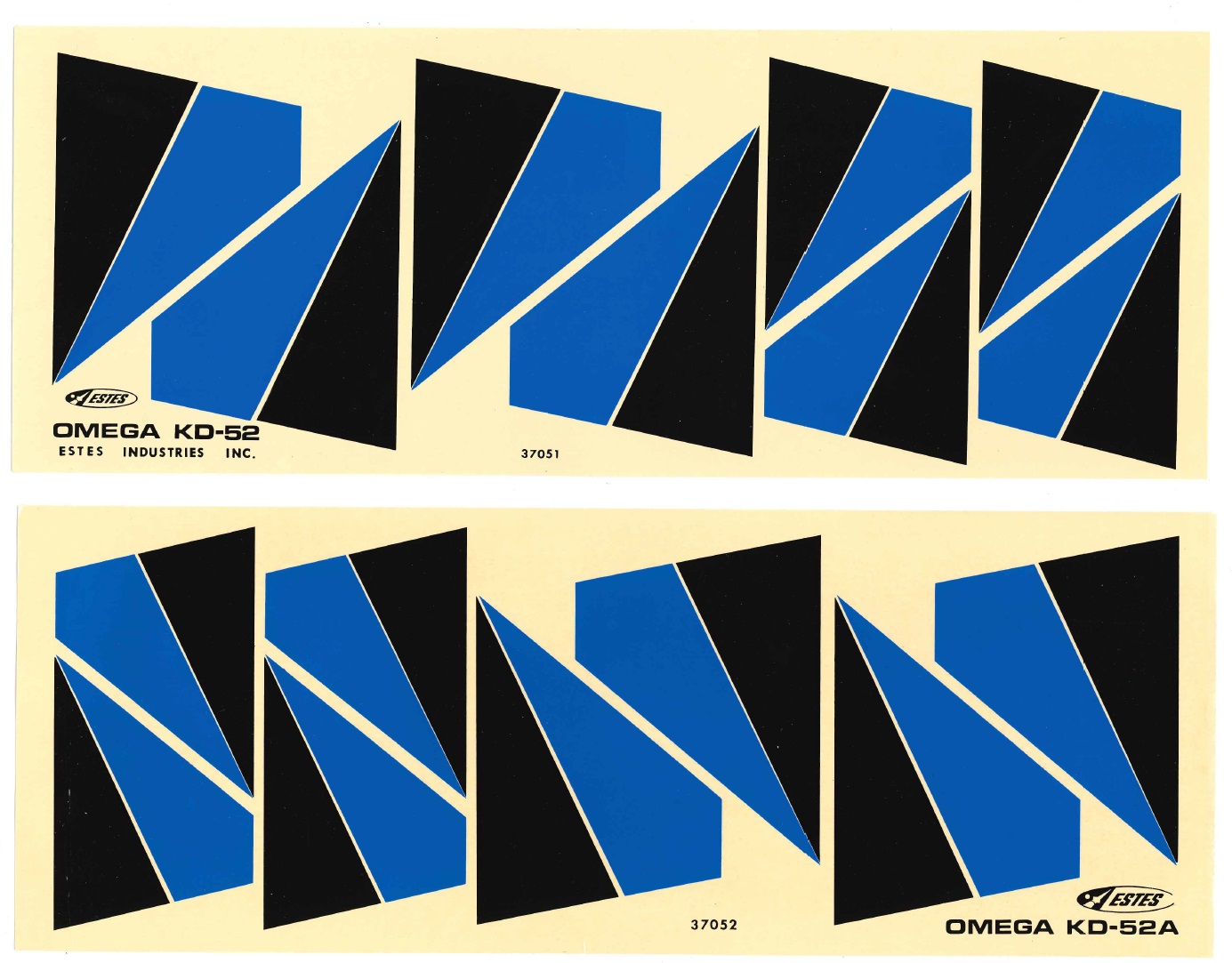 I'll add that the Cineroc nosecone clones you're seeing on Ebay are based on my .ork files (the proof is in the cross pattern where the eyebolt screws in).

Here's a link to my CinerocDV project:

I've actually seen those and done some work on them before. I'd caution you though about the purple. In my research, I've failed to see a confirmed Estes kit with decals that shade of purple.

This is my updated version of that dimensional drawing:

Thanks for the update to the drawing !

I didn't have a CINEROC in my hands to be able to confirm the dimensions given on that drawing . . .