Its been a while since I paid homage to birth place of modern aerospace in the US. Driving along and seeing the exit signs that point to Edwards AFB always gives me a pause.
I used to feel the same going through the town of Mojave where Burt Rutan was struggling to give birth to a new branch of aerospace. Then turds like Branson, Bezos, and the
biggest turd of them all, Musk, came along and I was done with romance. Still as a child of the 60s in Rochester New York who devoured books on jets from the library, being out there is a bit of a spiritual experience.

The Mojave Desert Advanced Rocket Society meets once a month 'North' of 'North Edwards' in the shadow of the lesser known end of the base. Or more like 20km a bit further north. From CA-58 to the Clay Mine Rd exit. Its a path I had not traveled in 5 years. I thought I was done with rocketry. Too damn old to chase rockets in 40 degree heat. And my co-pilot has been, and is still very ill... and 'insurance' does not cover everything here this country of GOP profiteers. So I sold every J and every K and have been selling dozens and dozens of my kit collection. And I invested what I could in Astronomy. Everything else went to the turds in our profiteering health care system.

But damn if that AP addiction is not wry!

All of a sudden I find I am rising on a Saturday morning at 6am (that alone was a first in 4 years). A few hours later, I am passing Palmdale's skunkworks in the distance, the huge windmill farms, and Mojave Spaceport. Fifteen minutes later I am shaking hand with rocketeers I had not since in 5 years. MDARS was still the intimate, laid back, happy launch it always was. And still is. However it was 9am and already 34C. Calm though with a lot of varying higher level winds.

I KNEW 41 degree heat would limit me. And I was right. I brought 8. Launched 3. And called it a day. A long ways to drive (200km each way) for three flights. But EVERY journey starts with
a single step. 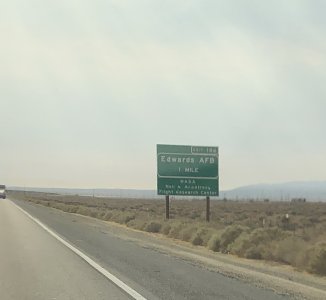 My decent looking The Launch Pad Matra Magic. Sporting a F21-4 (57ns) single use older than some of you reading this. What was 'new' is my first ever Chute Release. I've used
cable cutters to great success over the years, but not the JLCR. 3... 2... 1... CHUFF Spit. All done. Being old white lightening propellant and an old magnalite ignitor
I was not 'surprised'. Took another one out there, 3... 2... 1... CHUFF... CHUFF.... CHUFF CHUFF gone! The flight was great... but low. According to the Altimeter One
135m. The JLCR seemed to work fine. I had it set for 90m. The flight was so much lower than I expected, the JLCR made zero difference 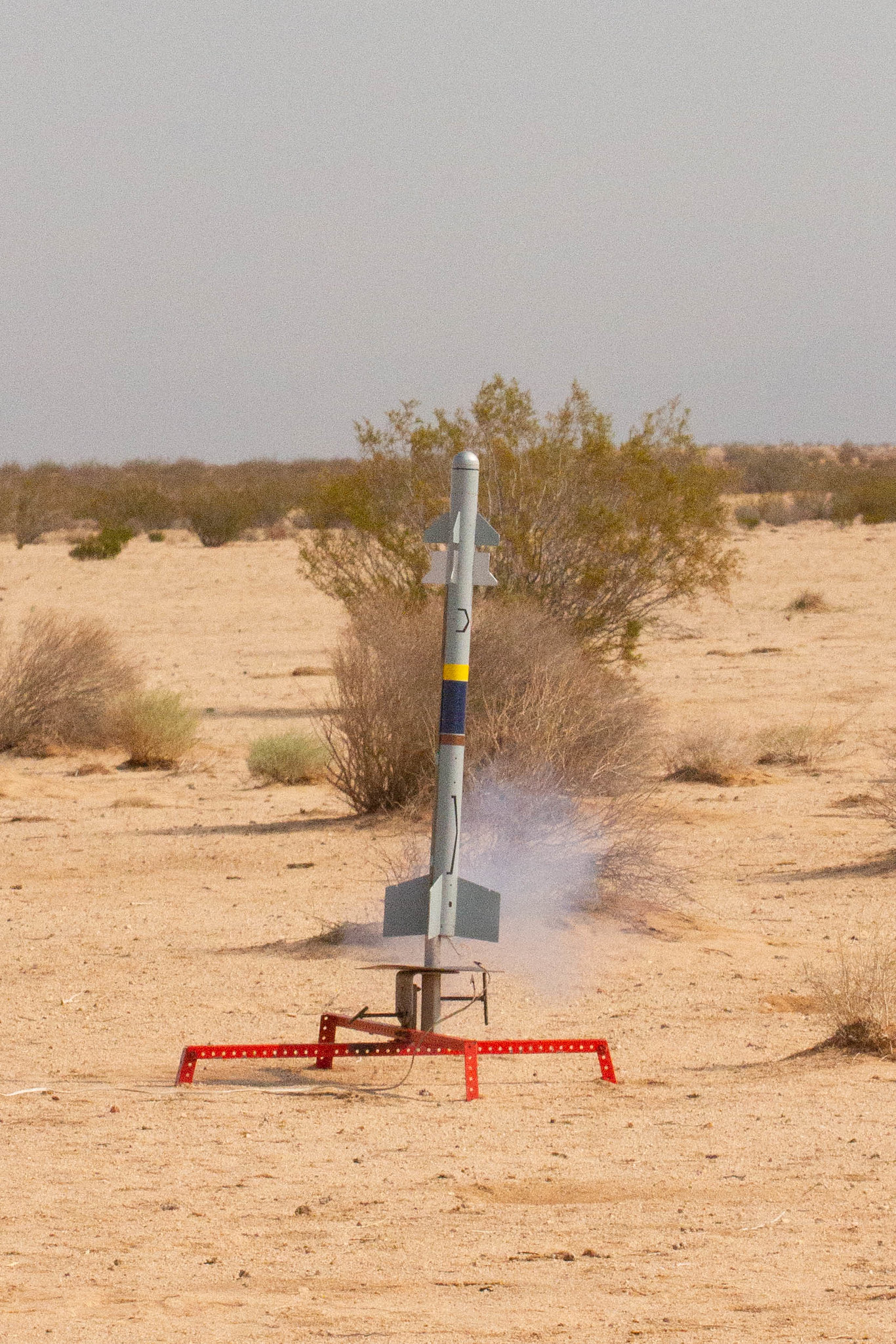 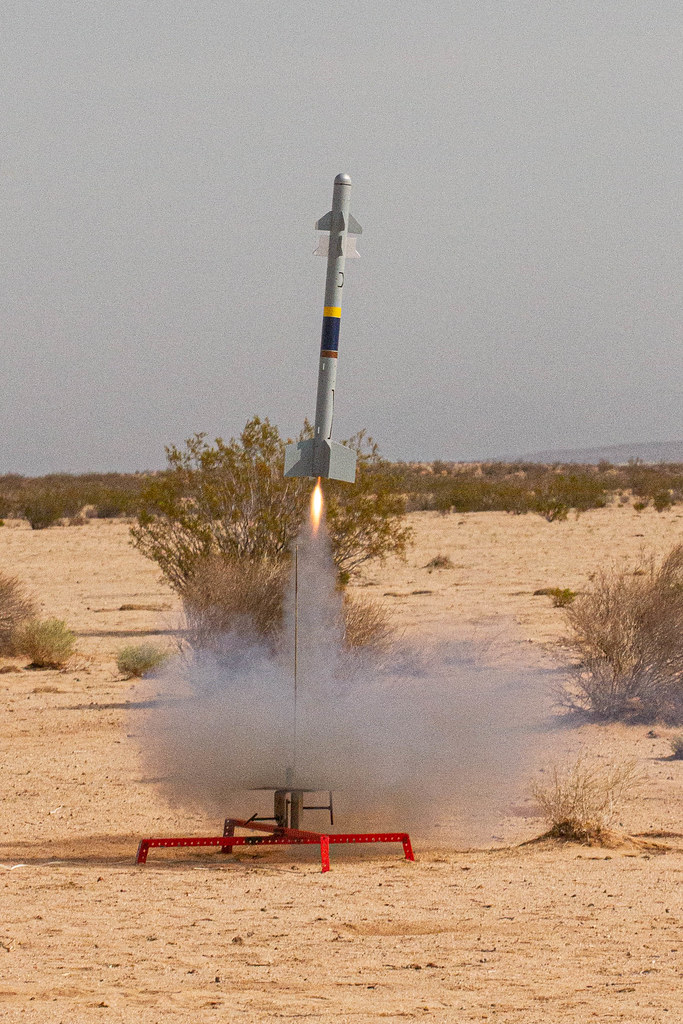 The Estes Ventris. A G38-7 EconoJet. I think it was old when I bought it. And now, probably 6 or 7 years old.
I am sure a some point I used a drill bit to open the swelled slot. So a repeat. CHHHHUUUUUUUUUUFFFFFFFFFF. Nothing
Walk of shame (and heat). Nothing else to try... all I have are either Copperheads (life is too short) or Magnalite. Grab another FS-12 ... 3... 2... 1... a CHUFF... CHUFF... CHUFF... bang off we GO! It was a nice straight flight on up to 450m. Again I had my other JLCR on board for 90m. And it DID release! BUT by the time if did, the shroud lines were hopelessly twisted. Yes twisted. I should listen to Camron when packing chutes. However there was little damage. Ever heard of an 'Estes Dent'? The way the Ventris landed caused an 'Estes Dent' in the body tube. Already repaired 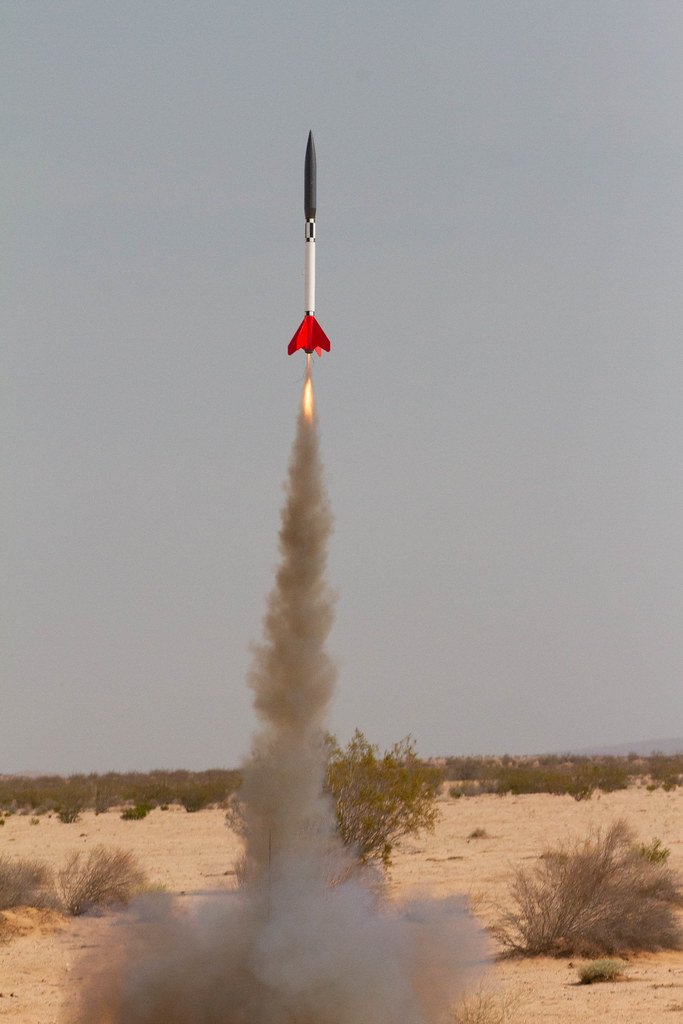 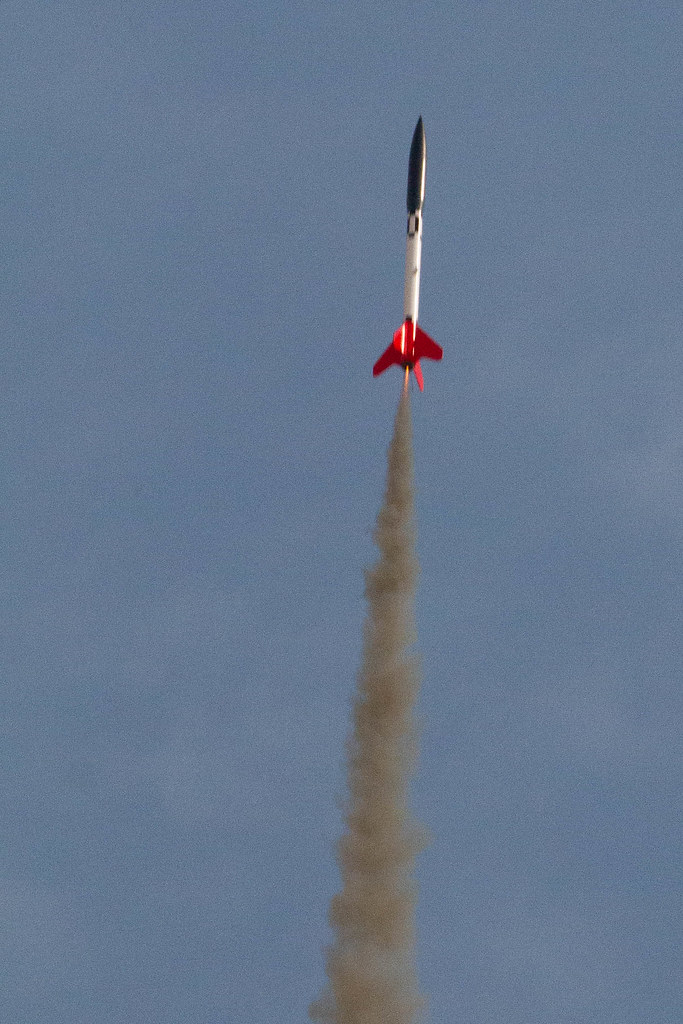 So not to be a wimp, but,... I was thinking... "Dude you got out of bed at 6 on a Saturday. You drove 200km. You launched. You are back in the game..." Go home!
But no. I brought eight, could I at least do three? I removed the JLCR from the Matra as well as removing the Altimeter One. I did the 'Camron' (some TRF'er) Z fold with the shrouds, and setup the 80mm diameter Gladiator on the pad with a '4 years ago loaded' CTI G118 Blue Streak cut to 7. This time... no chuff. (Of course! Its not white lightning that has sat in a beach side community for 5 years!) Boom gone... and JLCR did its thing! AND someone noticed I was a bit under the heat and walked the rocket back. It was not 'far' but that is how things roll in the desert. The Altimeter One gave me 230m. 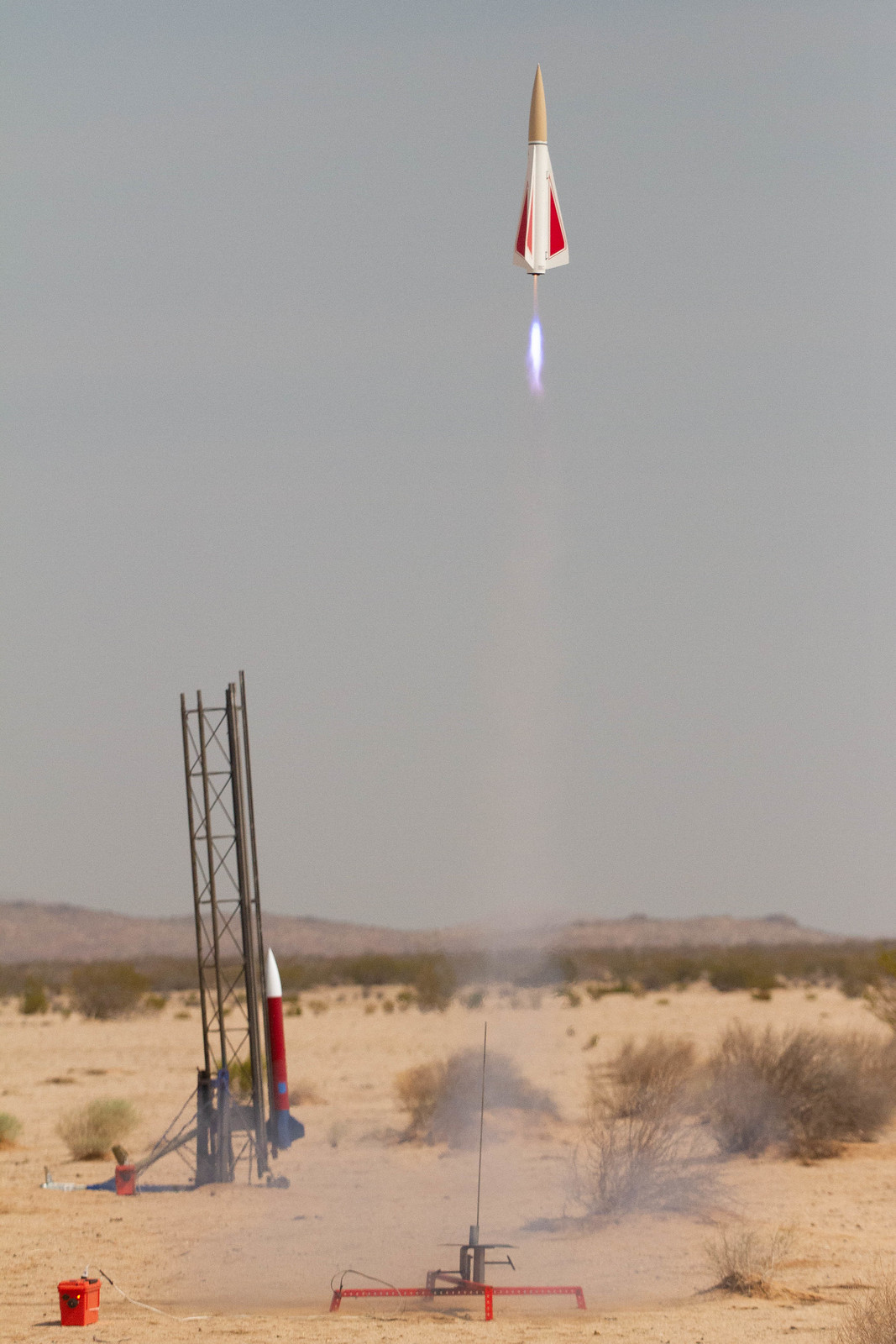 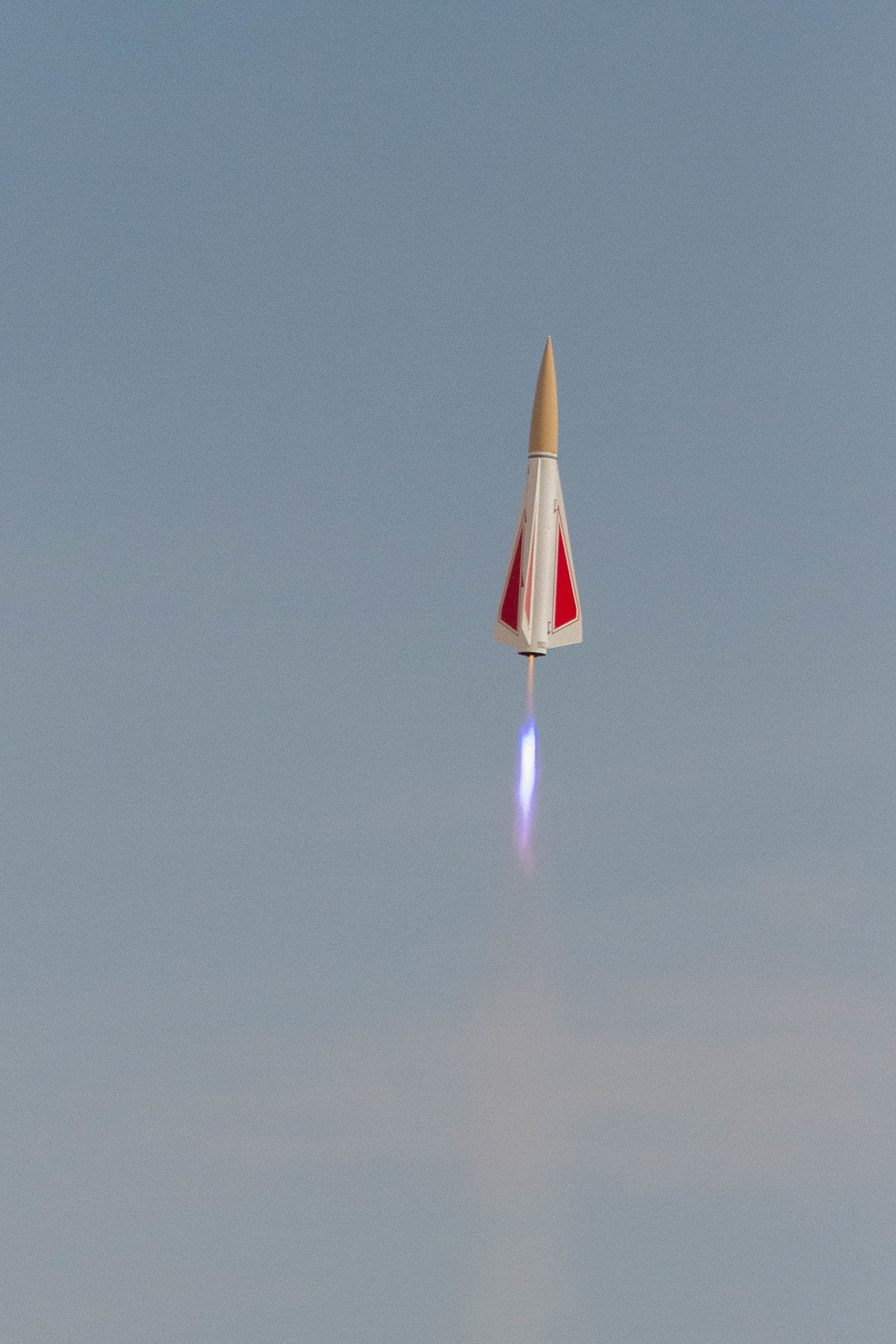 
There are some other flights from great peeps here 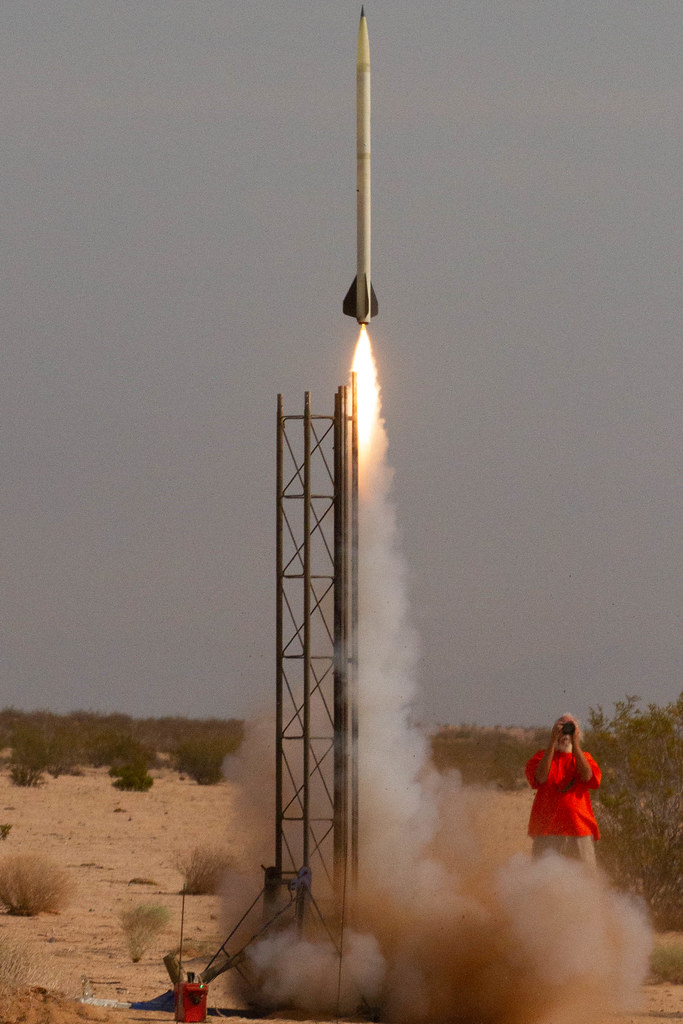 Explore this photo album by Jeffrey Gortatowsky on Flickr!

So there you are. Five years or so after my last launch, I put up 3. And they all returned. Not quite a full H in total impulse. Thats fine. I'll be back in September. And with a at least one I and one K. Temperature will moderate a little. It was just was wonderful to re-bond with fellow rocket nuts.

That sounds great! I'm glad you got the chance to fly and will again in the not too distant future. Thanks for sharing.

Welcome back. Flying a rocket cures a lot of “ills” for me.

Thanks for documenting the flights. And as to your reflections and comments in the first post....

lakeroadster said:
Thanks for documenting the flights. And as to your reflections and comments in the first post....

Not everyone will agree. Indeed most of my generation (and 1/2 the electorate) seems stuck on stupid. Everyone will never get sick... and C19 is just a mild flu (that would kill my wife)... ok enough of that...

I had a great time! Just wonder why the F21 in the Matra was so low? Maybe a few chuffs removed a lot of total impulse? Old white lightning is not very good? Or just a severe 20% variance.

Thanks so much for the history of your rocketry life. Wow, so sorry to hear that about your wife.