I received the following package in the mail yesterday: 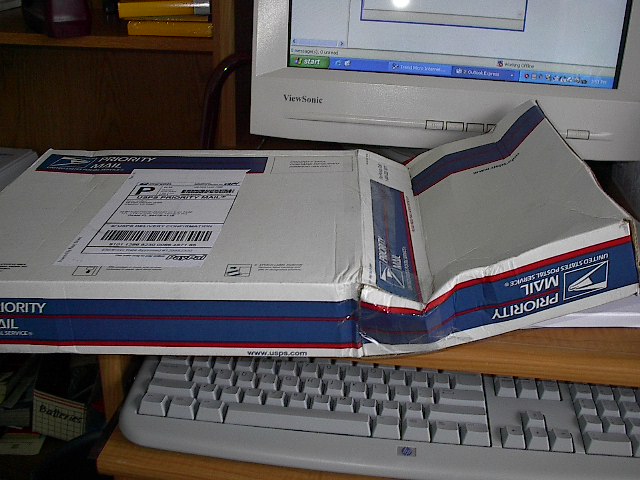 After opening it I found this: 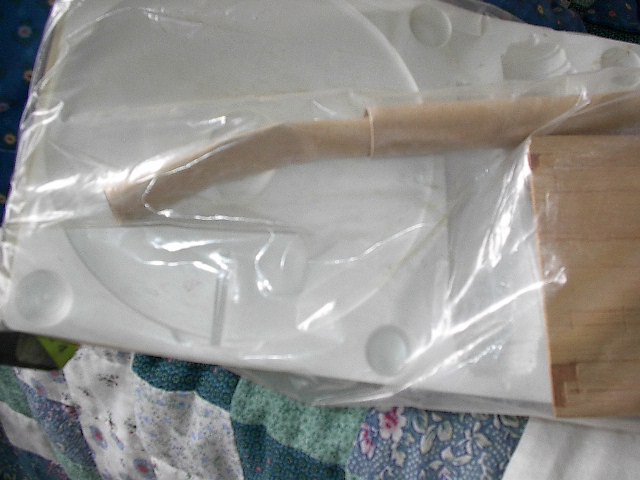 I then wrote the seller saying he could have taken better care in packing the old rocket kit.

He answered that he isn't responsible for the post offices mistakes. I should have used insurance.

Why should I use insurance?
I this case we are talking about an antique model rocket kit.
I wouldn't gain anything by being reimbursed with money and the post office surely can't supply me with an equivalent kit.

What do you guys think I should do?

Originally posted by Leo
I received the following package in the mail yesterday:

What do you guys think I should do?
Click to expand...

Take it to the post office and show it to them. They shouldn't have crushed the box. Have them replace it. Just because it's not insured that doesn't mean it's OK to handle a package in that way.

I'm not sure you will get any satisfaction from the post office, but you don't know until you try. Sometimes its the squeaky wheel that gets oiled. I'm lucky, my wife is an expert squeaker

i think they (the post office) are required to take reasonable care with items during shipping. it has obviously not been treated well, and i think they are liable for any damages. it's unfortunate that you accepted delivery and opened the package. did they just shove it in your mailbox that way?

As a vendor in this case I would not have told you "Its the post offices fault you should have got insurance" thats a rather cavalier attitude to have toward a customer. What I usually do is try to handle the damage claim myself form the Post office. In some cases I can recover the cost of postage and the kit. Then its a simple matter of sending the customer a new one on the Post Office. In this case however that looks like an old "USS Enterprise" It would be hard to replace. I am curious to see how this is resolved. It may be hard to imagine but I have a cousin who works for the Post Office and he has told me that they have picked up packages that look like that before they even touch them. Although I would bet 80% of the time the Post Office is the crusher. But if you really dont know the person who you bought that from you never know.....???

the package was obviously packed well ..and not intended to be folded in half...I would be extreemly pissed at the mail man, unless he's an idiot, he should know better. go to the post office and show them the damage he caused.

Did that guy juryrig two Priority Mail boxes? If so it appears it bent at it's weakest point, what a surprise. Maybe if he had used a proper shipping container that would not have happened. Looks to me like the shipper has to take Packaging101. And I believe the Post office will say that also if they look at that picture.


Judgement goes against the seller.

An almost similar experience with an ityem i shipped...no insurance.

I used the long triangle shaped priority box and it was obviously "Driven Over" by a large vehicle. The box had a tire tread mark across it!

The post office said, "You should have had it insured."

Totally Tubular has had similar things happen and they WERE insured.

The results from an insurance claim...wholesale price only, shipping NOT included in the claim...after 18 months.

I have always felt that shipping should be included on an insurance claim. You did pay for timely and a safe delivery...you didn't get that.

Geez.. As with sandman's example, it almost sounds like the "it wasn't insured" is becoming a scapegoat for them to do whatever they want with the packages....Yeesh.

Yea, I had the same problem recently. Here are a couple pictures of the package I received from guy who donated a bunch of honeycomb core and carbon fiber stuff.

I told him about it, but I shouldn't be complaining because it was over 15 square feet of honeycomb, and a little less than 3 lbs. of carbon fiber. The honeycomb was only slightly damaged, but I'll see what UPS can do about it.

Another picture of the package.

Well, a couple of things to keep in mind:

- As a buyer of an eBay auction, unless previously offered by the seller, in print, in the auction, insurance is the responsibility of the buyer (general rule of thumb, certainly not law), but I would not blame insurance issues on the seller

The model looked as though it was packaged well enough. Was it a cobbled pair of boxes? yes, but not relavant. All you have to do is look at the picture and it is clear that no priority box would have survived, so I would not blame packaging issues on the seller

Should you have insured it? Well, depends on what you paid. If I were to buy any collectable kit that I paid over $50 i would insure it. Would that *replace* the kit? No, but it would have gotten your purchase price back.

Is the post office responsible for such damage to a box? Unfortunately, no. Plan and simple. It's in writing and it's is very clear. That is why they have insurance to purchase. The only case where I have seen the post office belly up to the bar for an uninsured package was one that was *deliberatly* damaged by an employee and I had proof (the idiot admitted it... It was a triangle prioirty tube and the employee explained that it wouldn't fit into the PO box unless he folded it...) - Score one for me

Uncle mike commented that "as a vendor...", and he makes a good point. I don't know from what auction this comes from, but if he wasn't a vendor (ie: a real store selling stuff), then I would doubt if it really applies. It may just be some guy unloading some of his old stuff.

As a "Vendor", I take full responsibility for all of our products. If you get something damaged by the post office, I fix it, period. If, however, I sold a collectable in a private sale for, say, $100, and packaged it properly and shipped it without insurance, per the buyer, I would not be so quick to replace it or offer a refund

Just my 2 cents, with inflation

Originally posted by jflis
Well, a couple of things to keep in mind:


The model looked as though it was packaged well enough. Was it a cobbled pair of boxes? yes, but not relavant. All you have to do is look at the picture and it is clear that no priority box would have survived, so I would not blame packaging issues on the seller

I believe you deal with heavy paper products enough to know if you try to install one box into the opening of an identical box you must crease the box going in which weakens the interior box. It is obvious the US mail lobs all priority packages into bins, when the wieght becomes more than the stress of the box it wlil die. Looking at that mess that guy did it looks lilke an invite to destruction.

I wonder if it was packaged in a single box would the same result have happened? I personally doubt it. It seems a strange coincidence the box collapsed at the point the two boxes were joined. Actually no it doesn't, it was a problem waiting to happen. All it needed was the wieght of a bunch of other packages to pile on.

I looked at the picture again
I didn't notice the bad packaging at first glance.

he should have used a solid box,

in my case it was a solid package and the postman physically folded it in half...

I have had 3 out of the last 4 rockets I won off of ebay get destroyed. Most recently a Star Trek starter outfit that cost me $89. Check out the picture of what UPS did to a mint condition set! (yes, it was in a shipping box as well, not just the paper)Luckily it WAS insured, but as you say, this is a piece of history that is now destroyed and cannot be replaced. Still, I feel better about getting my money back so I can try again.

Rokitflite, was the UPS package marked Fragile? If you're shipping UPS, don't *EVER* mark a package "fragile". UPS has no provisions for shipping fragile materials and if you mark it as such, you're actually targeting your package for abuse (just like that chocolate milk commercial). I got this info from a buddy of mine who works for UPS.

Nope,
The package was not marked fragile. I learned a long time ago that writing ANYTHING on the outside of the box is useless. I received two Estes Solar Probes that the guy packed in basically a shirt box. The box was folded in half. He said he did everything he could to package it securely which was basically to write "please do not crush" on the outside in several places. I told him that that was like writing "please do not break" on an egg and then throwing it into a parking lot. He was good in that he refunded my money, but he lost my respect when he put the two mangled kits back up on Ebay without mentioning the extensive damage to the kits in the description.

Sandman
I have recovered postage on 3 occasions, its a matter of how much noise your willing to make. Let me clarify it however. I didnt actually get the money back for the postage. But it was credited to me on the meter head. I did however have to bring the meter into the post office.

The post office said, "You should have had it insured."

Totally Tubular has had similar things happen and they WERE insured.

The results from an insurance claim...wholesale price only, shipping NOT included in the claim...after 18 months.

I have always felt that shipping should be included on an insurance claim. You did pay for timely and a safe delivery...you didn't get that.