I wanted to hack a Punisher SS but the only file I found was .ork. Downloaded 15.03 and fired it up on a Linux box (yes I have java loaded and working)
Got the file from here: View attachment 303979 It wasn't my handiwork but I couldn't get OR to put a coupler tube in as I tried to modify it. Program worked but I couldn't find a menu that would help.

I basically just wanted a coupler for the NC and desired to tweak the tube lengths and insert a 29mm MMT instead of 38mm. I deleted the "switchband" as I didn't need it and my 15.03 version of OR doesn't have the screen for internal components when run in the configuration above. Is there a switch I have to throw in OR to get the menu?

Anyhow, I had OR save the file to a .rkt file and I was able to modify it via Rocksim. Took me minutes once I called RS up. Seems weird I don't get the internal component menu with OR. I'll try to mess with it some more as I am rushed to get a simulation pulled off for MWP14.

I picked up a small Punisher Sport last year as the ~$30.00 special and updated it with a spiral-wound nosecone. H238 should take it to 3600' for GPS tracker testing with a JLCR releasing the chute up relatively high as wind permits.
Has the thin reddish tubes: 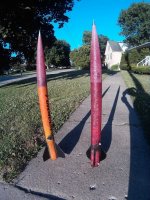 Liked the NC so much I got one for the "burned out" rocket on the left. It will fly too on an H250 and see if it will fly or burn up this time. Kurt
You must log in or register to reply here.
Share:
Facebook Twitter Reddit Pinterest Tumblr WhatsApp Email Link