A One Day* build of an Estes Der Max Red kit upgraded to a 24mm engine mount.

So my local vendor FlightSketch has been hosting a "Goblin vs. Der Red Max" competition, giving me the excuse to buy one of both. I went crazy on the Goblin with a 4" Loc kit, but generic for the Der Red Max with a regular Estes kit. After looking it over, I realized I could probably do the whole thing in one sitting. Then I decided I should make it interesting. So here's how to take your Estes Der Red Max, up-build it for 24mm motors, and give it a little additional extras.

Titebond II will be the glue of choice for the whole project.

Don't be like me and use too little kevlar cord and then have to add even more, before you add on your elastic cord. 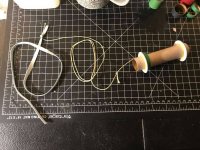 On to the body tube. If you're going for looks, as I am - fill the body spirals your way. I used thin CWF applied with a dull blade. Let dry, then sand. 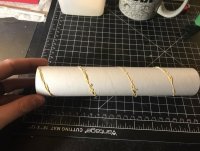 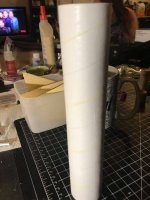 Prepare your fins whatever way you choose - paper, naked, CWF - it's all good. I did CWF followed by 120 grit, 220 grit, and 500 grit at the end. A little of the balsa shows, but it's Good Enough (tm). This would have gone faster but I put the fins under some books after the CWF dried, to make sure they didn't warp from the extra moisture. The again for 30 minutes after sanding. If you want this bird to vanish into the sky, round or airfoil the fins. I left them flat. 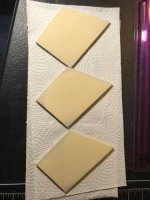 Meanwhile, the nosecone. As we'll see from later OpenRocket sims, using a D or E motor in the Der Red Max pushes the stability below 1 caliber. In order to get this back up, we're going to modify the nosecone and add 10g of mass to it. By default the nosecone is 22g. 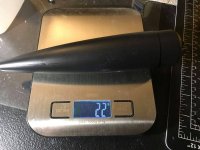 The hole in the top of the nosecone is far to small to get anything inside. It's dremel time! We'll cut about 1/4 of the radius on the inner transition. Since we're here, let's add two slots and use them as shock-cord mounts, because the built in nose cone attachment mount is tiny. 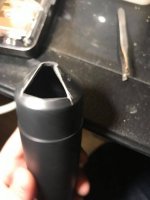 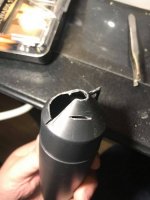 Now we have room to put extra mass inside. We need something that won't go anywhere and can be dialed in for exact mass. FixIt epoxy putty is the tool of choice here. 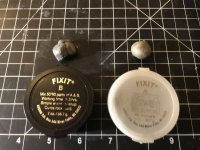 Measure up two equal parts to make 10g, combine very very well, and then hammer it into place inside the nosecone with a dowel. Sets up in an hour, turns rock hard in 24. 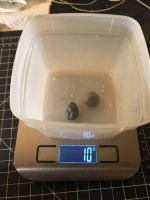 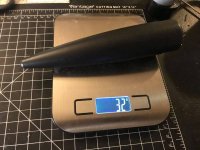 With the nose cone sorted, we'll install the motor mount into the body tube and then apply filets around the card stock rear. 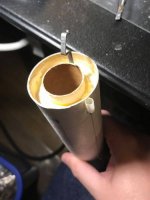 Right, we also marked the fins locations and lugs on the body. Estes provides an interesting pair of cardstock alignment tools that slide over the body and give you places to make pencil marks; then you just continue the lines with a straight edge. First time I've seen this. 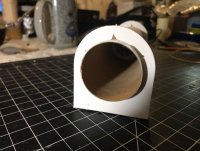 Gluing the launch lugs is straight forward, just use the locations as indicated in the directions. 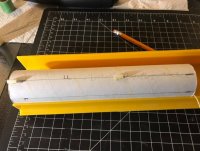 While this stuff is drying, we look at the recovery. Estes includes a cool looking pirate chute, but it is absurdly large for this rocket at 18" across. 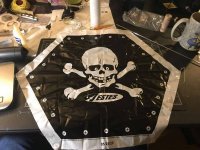 A reasonable option is to switch to a 12" chute if you have one, and nylon would be a nice upgrade. If you want to keep the nifty pirate chute you've got a few options. One is to hope you don't lose the rocket to a tree; no thanks. The others are to cut some holes in the chute, or to shorten the chute lines. I went with the second option. The chute lines are 12" long, and I put a knot in them at 6" from the end. A drag-around-the-room test shows the chute is considerably less open in this setup. 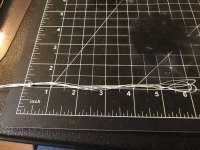 Now all you need to do is fold it for packing. I added a length of elastic to the end of the chute lines to aid with attaching to the nosecone, as the shortened lines become more difficult to fully pack inside the folded chute. 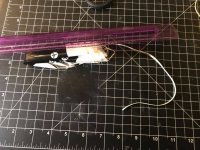 Can we finally glue the fins on? Yes, yes we can. 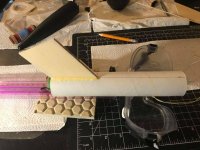 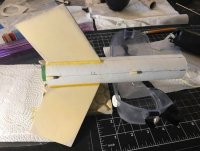 Once you've got all three fins, you're essentially done except for connecting the shock cord and chute to the nose....

Elastic slips through each of the slots we dremeled and then you can double-tie it off. You did sand or file the edges of the cuts smooth, right? 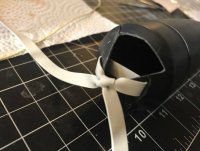 Hold up a moment - what if we want to stash an altimeter inside? There's no way for pressure to equalize from the outisde. Drilling holes in the body is not a great idea as exhaust gasses could vent out of them instead of pushing the nose out. Instead we'll put the pressure holes on the nosecone. Two each on opposite sides. 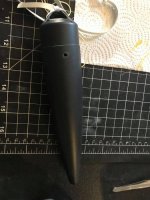 That's it, you're done! Attach the chute (swivel as desired) and it's ready to fly or for the start of paint and decals. 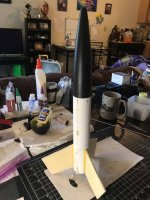 Your new 24mm Der Red Max will fly on everything from a C6-5 to an Aerotech E30-4, and might fly on 24mm F motors. No idea if it will shred like wet paper with those engines. It's only 77g dry!

The question everyone wants to know: How high and fast does she go?
Note assumption: No rounding or airfoiling. If you do that, it goes considerably higher and faster!


Gains after this are rapidly diminishing. If you're enough of a mad lad to put an Economax F44W-8 in this thing, it goes no higher than the E20/E30; it just gets there much faster, hitting Mach 0.74 with a peak acceleration of 500 m/s^2.
B

Nice build. If you are planning to fly on E motors you are going to need the nose weight. On D12-7's the DRM flies perfect with no added weight. Haven't flown mine on an AT E20-7 as I don't have the room here in Chicago but I will try it one day when I ship one out the parents house in AZ.

It's epoxy-based, so it should stick pretty firm in there. I've used the FixIt epoxy before and it seems to stick to things pretty well. I'll keep an eye on it.
J

Back_at_it said:
Nice build. If you are planning to fly on E motors you are going to need the nose weight. On D12-7's the DRM flies perfect with no added weight. Haven't flown mine on an AT E20-7 as I don't have the room here in Chicago but I will try it one day when I ship one out the parents house in AZ.
Click to expand...

I assume you rounded or airfoiled the fins? How was the stability?

Next up is the finishing thread followed by the flight report.
B

Joshua F Thomas said:
I assume you rounded or airfoiled the fins? How was the stability?
Click to expand...

Just rounded the leading edge of the fin. Stability is fine without nose weight on a D12-7. Flew just as good as it does on a C6-5 with more punch off the pad and a lot more altitude.
J 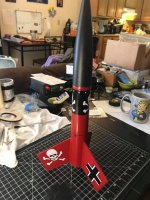 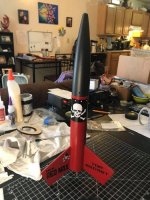 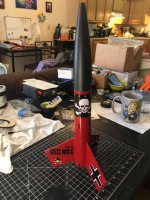 My attempt to shorten the lines on the pirate chute didn’t work as expected and the descent rate was much higher than expected. For the C6-5 I switched to a 15” thin-mil chute and that worked nicely.

Wind caused some issues and I was aiming upwind by between 5 and 10 degrees.