Rockets aren't the only things trees like to grab.

That's one big bird trying to land in a small tree! I have flown low and slow before and I would never try a tree landing. It will be interesting to hear what the pilot was doing or attempting to do. I wonder if he had a problem and it was an emergency landing?

That wasn't parking, that was crashing with style.


Most likely engine trouble. Maybe trying an emergency landing in some open area to the right of the screen but got too low to make it. Watched again, it was banking left, and there was an open field in the background, but that was too low and too late to try a turn to get to there. Report said it was trying to land at the airport but no info on how close the crash was from the airport. If not mechanical and no crazy winds, then a pilot without much experience to end up in that much trouble. Unless he was "Showing off" for someone, in which case Karma bit him hard.

wow , no way will that be repeated with same results

Plane had JUST taken off. 80 year old pilot, but no indication that age was an issue. Mention of a fuel leak but that may have been leakage after the crash.

Found the airport on Google maps.

Below left, a view of what seems to be the parking lot. And at right a zoomed back view showing a lot of the airport.

Plane would have been flying from right to left, map-wise (towards the west), when it hit the tree.

80 year olds do not tend to be newbie pilots, but rather VERY skilled pilots who have flown for decades who don't do dumb things ("There are old pilots, and there are bold pilots, but no old, bold, pilots").

So unless there was a medical issue, very likely a mechanical problem. Only a fool would try to "land" in a tree unless as a last resort from avoiding a worse crash. 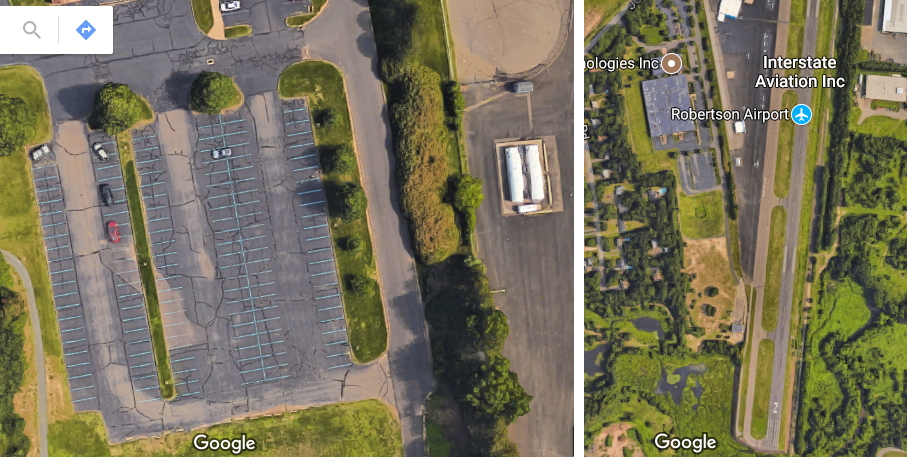 I did something like that over 20 years ago with an R/C Paragon glider that had a 10 foot wingspan. I built a straight dihedral wing with ailerons (instead of a polygon wing), (with flaperons), Gaupner spoilers and retractable release hook. I got too far downwind
on final and had to come over some short trees. I was way to the south with little depth perception because of the distance. Trimmed for best glide and saw the Paragon disappear behind the tree line. I unfortunately jerked back on the stick
which was stupid but turned out to work. I saw the glider rear up, and nearly stall into the top of a short tree. There was little forward motion but the glider stayed in the tree and didn't tumble down.

I shinnied up a few inches and was able to lift the glider out with my outstretched arm, forward in toto. You know, the plastic covering wasn't even punctured! Lucked out there.

Came in from the other direction one time too far south and east. Set up for best glide and when it disappeared behind the tops of a cornfield, I waited several seconds and ran like heck to the spot. I got there and there was a stopped car (which was unusual
'cause this was a country road) and the Paragon landed 20 feet past the road and had to have come in over the road. I waved to the guy in the car, he waved back, smiled and went on his way. Obviously he saw the thing coming in and it landed in a large patch of grass next to a tractor parts shop.

One last time I unknowingly hit the trim to "full up" on launch and the high start yanked the Paragon in a steep climb until the chute came of the hook due to the glider being near inverted on launch. The hi-start parachute goes flying off in the intended direction of flight and I have a nearly inverted 10 foot wingspan Paragon glider going slow inverted. When the hi-start chute popped off, I instinctively pulled the stick back to get the plane completely inverted and get the nose down. I then did right aileron, left rudder and witnessed a nice slow half roll to upright and then I could add a bit of down elevator to further build up speed. Was up 40 - 50' and had time to do a left 180 to bring it to a safe landing. I had fun with that thing. Kurt

"Any landing you can walk away from..."

I think it was shear luck. George, that's a nice shot and it can be determined he hit that second tree from the left where that grassy median can be seen. That's like a 75 degree angle from runway 2. I wonder if he took off from another runway or what?
The flaps were down and that's not ordinarily what is done on take off unless it's a soft field take-off. They wouldn't be needed on a concrete runway unless there is a grass strip on that airport. I flew out of an airport in the 70's with a tower that
had a grass runway nestled in with the concrete ones. Usually you milk the flaps up when up to flying speed and starting to climb but he may have been busy with a stuttering engine on climb and decided to leave 'em down. I believe a soft field
takeoff in a 150 (and this was years ago) was 10 to 15 degrees of flaps. Oh well, the FAA will figure it out. Any landing you can walk away from is a good one. Especially in this case.

Late 70's a student pilot flying solo landed short at Dupage County Airport in West Chicago, Illinois. Somehow, he impaled the end of a telephone pole! He was lucky it went through the windscreen on the unoccupied passenger side of the 150! The pole bent over but was at a 60 degree angle with the airplane up in the air and the crossbeam kept the plane from sliding down! He walked away after they got him down unharmed! I saved the newspaper photo until it crumbled away. Kurt

omg... that pilot needed a change of shorts..

it would have only been better if he had landed in a disabled parking spot....

I worked with a guy years ago who said he would deliberately target a wing on a tree in a crash landing if he knew he was going to crash. His theory was that turning the kinetic energy into rotation was a good way of lessening the impact. Seeing some really high speed car crashes with similar processes makes me think he was onto something. Fuel coming out of the wings would be my worry.

OverTheTop said:
I worked with a guy years ago who said he would deliberately target a wing on a tree in a crash landing if he knew he was going to crash. His theory was that turning the kinetic energy into rotation was a good way of lessening the impact. Seeing some really high speed car crashes with similar processes makes me think he was onto something. Fuel coming out of the wings would be my worry.
Click to expand...

My grandfather was a pilot, and while we were on a road trip, he asked me a few things about flying, such as which side of a highway you'd want to land on in an emergency (going with traffic, not against it). He mentioned that in the event that a plane was going down over a forested area that you want to try and pick a place where you can hit two trees at the same time with the wings if you can. Fortunately, neither of us had a reason to try either type of landing.

B
Tony The Tiger

B
B17 just crashed in Connecticut
2