I hope all retro game companies offer one of these. With modern technology, they could put their entire game line in one of these instead of just 30 at minuscule additional cost, at least the ones that work well with their emulators.

Begun, the Clone Wars Have: SEGA Fires Back at Classic Mini NES With a Mini Genesis 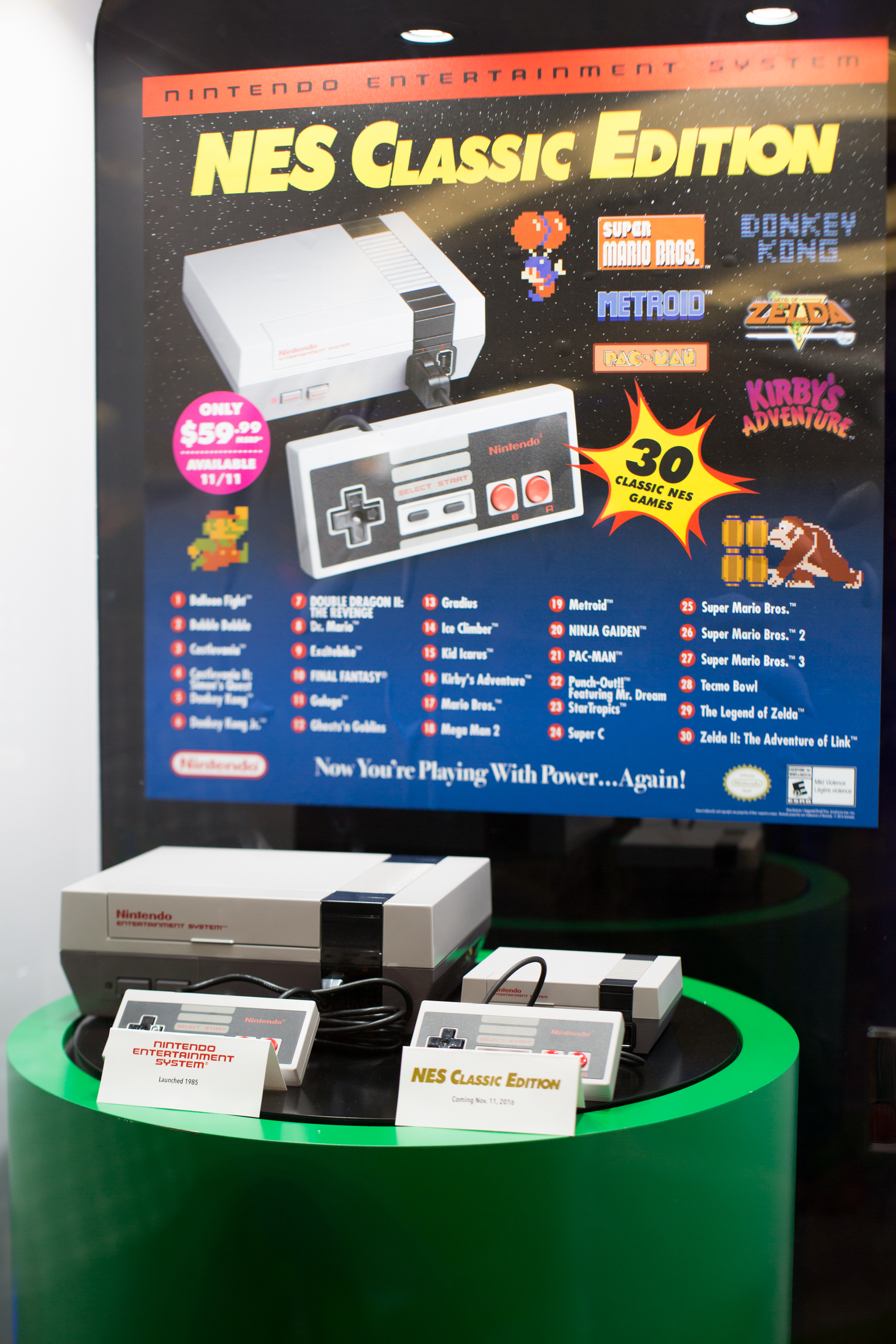 I hope the Nintendo games are true to the originals. I have bought those Atari all-in-ones and the games are both cut back in features and perform worse.

I would consider getting one for Galaga alone!

The appeal of classic console and arcade games was primarily THEIR GAME PLAY. It had to be that way since the graphics weren't great.

Just as the very popular Angry Birds series of games are simple games with appealing game play, I think that with all of the emulators already written for various OSs that play various console and arcade game code flawlessly using the vastly greater computing power of modern devices to emulate the electronics of old consoles and arcade games, money could be made if the owners of those old games would create game collections for modern game systems, PCs, tablets, and phones and I don't mean the half-arsed attempts thus far, I mean serious attempts containing ALL of their popular titles and maybe even the less popular ones. They could put hundreds of games in one new release from one programming house. I think they'd sell a bunch of them.

Instead, we get a trickle of dedicated and limited game hardware like the one I posted above where much of the cost is in hardware and packaging which would be unnecessary if just a paid software download was available on, for instance, Google Play. Examples of what's possible, but in single-game releases that I would have already bought if not for a reviewer complaint that they can't be played offline for some reason, a fatal flaw IMO:

A lot of emulators fail on things that require shadows, blending, or precise controls.

Very little more frustrating than getting a few hours into a classic and finding you can't continue due to an emulator glitch.

"Emulator Glitch" Well I have a name for my next rocket !! That said, I already know what the other half is gonna want for Christmas

Totally cool, thanks man! Galaga is totally awesome. We spent countless hours playing that, Ninja Gaidan, Super Mario Brothers, Mario RC, and others. That's a pretty good price point and I can already see one sitting under the tree in December!

Bat-mite said:
I would consider getting one for Galaga alone!
Click to expand...

If you have a Wii or WiiU they have a virtual console where you can buy and download many of those games 5 bucks a piece.

GlenP said:
If you have a Wii or WiiU they have a virtual console where you can buy and download many of those games 5 bucks a piece.

There are also small collections for other game consoles that can be bought dirt cheap used. These are for the PS1, but the PS2 can run PS1 games:

Yeah the girlfriend has already mentioned one of these, so I will undoubtedly get her one for Christmas. She had wanted one of those el cheapos you see for sale by the cheap toy guy at the mall. Hopefully these will be good.

I recently breezed through Simon's Quest on an emulator on my phone. That is not the way to go. Controls aren't precise enough and having a controller overlay the screen is horrible. Dedicated hardware is a better idea.

It would be awesome if they made some of the games true co-op rather than taking turns. Double Dragon being at the top of the list, but I don't see it on the list. The original Contra failed to make the list as well it seems.

The gameplay of the original NES was horrible IMO. There is still a phrase in gaming "Nintendo Hard". Some games were brutally idifficult and were that way just for the sake of being hard. Enemies that can't be killed, indiscernible patterns, failed controls execution, overwhelming number of ways to die on one screen, etc. Graphics were top of the line back then and no one knew any different.

But still...I must have one!

MikeyDSlagle said:
Controls aren't precise enough and having a controller overlay the screen is horrible. Dedicated hardware is a better idea.
Click to expand...

Yep, that's THE big problem with trying to play old arcade and game console games on phones and tablets - the games' controls. There are retro game control pads that plug into a USB port, so it can be done, and if the old game producers would just get together and come up with a standard one and then release their games that would be fantastic. I think there's potentially a lot of money in it for them at little up-front cost if they could just cooperate, but I suspect that would be like herding cats.
Last edited: Jul 27, 2016

Yeah I've had emulators on my computer and used a usb game pad with some success. Sometimes ii was almost a nightmare programming the controller though. I've seen devices that look like controllers that you put your phone in, never cared enough to try one though.
Last edited: Jul 28, 2016

I'll be getting one of these. There are a number of games on there that I liked. I still have my SNES and all the games but it's not hooked up. I've heard some say it will work on an HDTV and others say it won't.

I do wish there were more games on it though. I loved both Top Guns and even though it was probably one of the hardest known NES games, Battletoads was one of my absolute favorite games for the NES.

Just something about a big mutant frog beating up on stuff was just so cool.:wink:
S

Maybe Nintendo is afraid someone will use one of these instead of the toy zapper.

Battletoads had the coolest intro, at the time anyway. I remember a spaceship zooming by...was like a movie, the first I remember being like that.
I think the sewer jet ski level is the hardest part of any game...ever! Several magazines has said as much as well. Ghosts and Goblins was pretty darn tough too, and Kid Icarus-stupid grim reaper. Wizards and Warriors was one of my favorites, I remember playing through the whole game. It was actually one of the few I beat without a password, cheat or Game Genie. Contra being another, with my older brother on co-op.

MikeyDSlagle said:
Yeah I've had emulators on my computer and used a usb game pad with some success. Sometimes ii was almost a nightmare programming the controller though. I've seen devices that look like controllers that you put your phone in, never cared enough to try one though.
Click to expand...

Yep, it's the configuration of the controller that's the usability problem even when you have a proper controller, that's why I mentioned that they need to come up with a standard controller so an auto-configure software function would know what it was working with and automatically set it up for a particular game since most people wouldn't want to mess around with configuration that much. But, once again, getting any kind of cooperation like that between the various classic game producers would be like herding cats. It shouldn't be, but I suspect would be.

Getting copies of some of the games on cartridges can cost close to what the mini system is going for so it'll likely be worth while. I may pick one up for the Adventures of Link alone even though I have working cartridges of several of the other games. Duck Hunt and the other shooters need a tube TV to work in it's original format so that's likely why it's not on there you'd need a sensor bar or similar to the Wii to do it on projection or modern TV's
You must log in or register to reply here.
Share:
Facebook Twitter Reddit Pinterest Tumblr WhatsApp Email Link